'And The Show Went On: Cultural Life in Nazi-Occupied Paris'

And The Show Went On: Cultural Life in Nazi-Occupied Paris 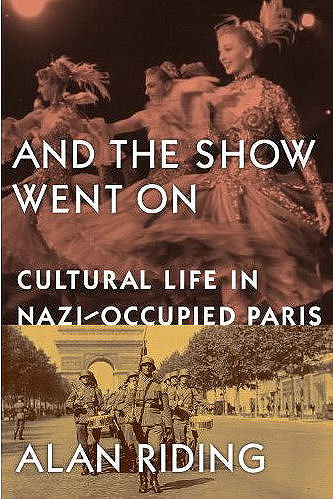 On June 14, 1940, German tanks rolled into a silent and deserted Paris. Eight days later, a humbled France accepted defeat along with foreign occupation. The only consolation was that, while the swastika now flew over Paris, the City of Light was undamaged. Soon, a peculiar kind of normality returned as theaters, opera houses, movie theaters and nightclubs reopened for business.
This suited both conquerors and vanquished: the Germans wanted Parisians to be distracted, while the French could show that, culturally at least, they had not been defeated. Over the next four years, the artistic life of Paris flourished with as much verve as in peacetime. Only a handful of writers and intellectuals asked if this was an appropriate response to the horrors of a world war.

Alan Riding introduces us to a panoply of writers, painters, composers, actors and dancers who kept working throughout the occupation. Maurice Chevalier and Édith Piaf sang before French and German audiences. Pablo Picasso, whose art was officially banned, continued to paint in his Left Bank apartment. More than two hundred new French films were made, including Marcel Carné's classic, Les Enfants du paradis.

Thousands of books were published by authors as different as the virulent anti-Semite Céline and the anti-Nazis Albert Camus and Jean-Paul Sartre. Meanwhile, as Jewish performers and creators were being forced to flee or, as was Irène Némirovsky, deported to death camps, a small number of artists and intellectuals joined the resistance.

Throughout this penetrating and unsettling account, Riding keeps alive the quandaries facing many of these artists. Were they "saving" French culture by working? Were they betraying France if they performed before German soldiers or made movies with Nazi approval? Was it the intellectual's duty to take up arms against the occupier? Then, after Paris was liberated, what was deserving punishment for artists who had committed "intelligence with the enemy"?

By throwing light on this critical moment of twentieth-century European cultural history, And the Show Went On focuses anew on whether artists and writers have a special duty to show moral leadership in moments of national trauma.

All reviews of the book are at http://www.andtheshowwenton.com/index.html

AND THE SHOW WENT ON
Cultural Life in Nazi-Occupied Paris
By Alan Riding
Illustrated. 399 pp. Alfred A. Knopf. $28.95

One of my favorite songs is “Les Chemins de l’Amour” by Francis Poulenc, a great composer who could turn his hand to anything from high operatic tragedy in “Dialogues of the Carmelites” to a boulevard ballad like this one, and when I used to cover the Tour de France, I would play the original recording by the adorable Yvonne Printemps as I pottered along one route nationale or another. Then one day I glanced at the liner notes and saw when and where it was made: Paris, November 1940. While my parents’ generation in London nightly awaited the air-raid sirens, across the Channel, the bands still played.

Thirty years ago, while reporting on Latin America for The New York Times, Alan Riding began wondering how artists and writers responded to brutal dictatorships. He then went to live in Paris and realized that not so long before, the French intellectual and cultural elite had provided an answer, in often unlovely ways. “And the Show Went On” describes this history in gripping and painful detail.

His story begins on June 14, 1940, when the Wehrmacht entered an undefended Paris — or does it begin much earlier? France had been a deeply divided society since the Revolution, and the fissures opened up all over again in the interwar years. Even now, the collapse of the French Army in 1940 is something of a mystery. The French generals were pretty useless, but they reflected a malaise that had undermined national spirit.

At the time, Jean-Paul Sartre was an army meteorologist, spending his days when not observing the weather making notes for what became “Being and Nothingness,” published (please note) in 1943. In characteristically obtuse words, he said later that France was corrupt and run by the rich. “No one wanted to die for that, until, well, until we understood that the Nazis were worse.”

By no means all the French understood that, even after the defeat. With the Germans occupying much of the country, and a subordinate regime at Vichy, the meaning became clear by November 1940, when all teachers had to swear that they weren’t Jewish. “I thought it repugnant to sign,” Simone de Beauvoir odiously said, but “there was no way of doing otherwise.”

Some needed no encouragement at all. Drieu La Rochelle, Céline and Brasillach were all gifted writers, and all were vehemently anti-Semitic fascist sympathizers. Brasillach edited the Jew-baiting weekly Je Suis Partout before the war, and continued to do so enthusiastically under the occupation.

Other writers and artists simply carried on as if nothing had happened. German musicians visited Paris, French musicians toured Germany, and French artists too, Derain and Vlaminck among others. Picasso’s record was fairly contemptible throughout, though he got away with it afterward. And musical life was vigorous; as Poulenc himself said, “everyone finds in it a way of forgetting the present ­sadness.”

Those who could not forget were Jews, or at least the poorer ones. The first large-scale rafle, or roundup, in Paris was in May 1941, followed by more, when victims were herded into a cycling stadium, before leaving for Auschwitz. These rafles were carried out dutifully by the French police, a truth it has taken the French state and nation a long time to come to terms with.

Some of the story Riding tells so vividly has been told before. Two other good recent books are “The Shameful Peace: How French Artists and Intellectuals Survived the Nazi Occupation,” by Frederic Spotts, and “Americans in Paris: Life and Death Under Nazi Occupation, 1940-44,” by Charles Glass. Riding himself wanders off his Parisian track with lengthy discursions. The admirable young Harvard graduate Varian Fry ran his own underground railroad from Marseille, providing visas for innumerable refugees, some famous artists, some obscure, which he did with no official encouragement at all: the United States maintained diplomatic relations with Vichy until Pearl Harbor, and the American consul in Marseille strongly disapproved of Fry.

Back in Paris, theaters and nightclubs did a roaring trade, eager to amuse the large contingent of German soldiers. The list of writers and artists who did their bit for cultural fraternization is a roster of French culture and popular entertainment at the time, from Jean Cocteau and Jean Giraudoux to Edith Piaf, Maurice Chevalier and Django Reinhardt. The ardor with which some actively collaborated is almost less chilling than the sheer cynicism and amorality of many more.

Once Russia entered the war, the French Communists, as passive as any until then, took up violent resistance, with grim consequences. When a German naval cadet was assassinated at a Métro station in August 1941, Hitler demanded ruthless reprisals. Within nine months, 471 hostages had been shot, and so it went, until the savagery of 1944, when whole villages were massacred by the retreating Germans.

No one should dismiss the French as a nation of cowards or appeasers. One Englishman who worked in the Special Operations Executive, sending agents into France, put it well when he said later that most French people were objective collaborators, in the sense that they accepted the occupation, and also objective résistants, in that they wanted to be rid of it. And Riding quotes the wise words of Anthony Eden, a brave infantry officer in the First World War and Churchill’s foreign secretary in the Second: those who have never experienced the horrors of an occupation “have no right to pronounce upon what a country does which has been through all that.”

But that cuts two ways. Although not many Frenchmen were really in a strong position to pronounce upon others, they did so: with the liberation came the reckoning, in the form of the épuration, or purge, after many a sharp about-turn. Riding captures with nice irony the way that “newspaper stands selling Je Suis Partout and Au Pilori one day were offering Combat and Libération the next.”

Women accused of sleeping with Germans had their heads shaved and were sometimes paraded naked through baying crowds, and many thousands of people were shot, among them a number of journalists. They included Brasillach, despite pleas for clemency from the tender-hearted François Mauriac.

In the English phrase, Albert Camus had a good war — an authentic resister (unlike Sartre, who carefully rewrote his wartime résumé). At first he criticized Mauriac’s misplaced call for mercy, but quite soon Camus came to think that Mauriac had been right, and added his name to the unsuccessful petition for Brasillach.

Though Charles de Gaulle insisted on the execution of Pierre Laval, the Vichy prime minister, he said he did not want vengeance on those who were merely “misled.” And yet de Gaulle bears indirect blame. He above all people purveyed the healing notion that the French had been united in their resistance except for a few traitors and weaklings. This helped make possible the creation of a new democracy, but it was preposterous all the same.

We’ll always have Paris, but we may not feel quite the same about it after reading “And the Show Went On.” Brasillach isn’t someone I would normally want to quote, and Riding doesn’t mention this story, but when I put down his enthralling and disturbing book my feelings were expressed by Brasillach’s last words before the firing squad: “Vive la France, quand même.”

Geoffrey Wheatcroft’s books include “Le Tour: A History of the Tour de France,” “The Strange Death of Tory England” and “Yo, Blair!”"
return to list of books and publications
© website copyright Central Registry 2020