6 February 2012 US Federal Judge orders return of Romanino painting 'Cristo Portacroce' to the heirs of Federico Gentili di Giuseppe, a Jewish man who died shortly before the German occupation of France in World War II. On 18 April 2012 it was returned by the US authorities. 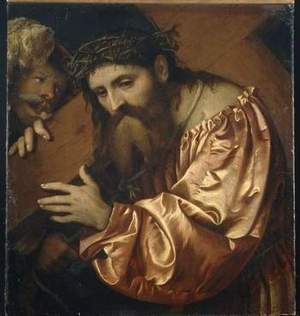 On 6 February 2012 US Federal Judge Robert Hinkle ordered the return of a 16th century Baroque painting depicting Christ carrying the cross to the heirs of Federico Gentili di Giuseppe, a Jewish man who died shortly before the German occupation of France in World War II.

Previously, in January 2012, the US District Court for the Northern District of Florida had ordered the forfeiture of the painting, the Cristo Portacroce Trascinato Da Un Manigoldo after its seizure on 4 November 2011 by U.S. Immigration and Customs Enforcement's (ICE) Homeland Security Investigations (HSI).

The Commission for Looted Art in Europe had been seeking the restitution of the painting from the Italian government, which held it in the Brera Museum in Milan, and assisted in obtaining the seizure and return of the painting after it was loaned to the Mary Brogan Museum in Tallahassee, Florida.

On 18 April 2012 at a ceremony at Tallahassee, the painting was returned by ICE.

"Thanks to the tireless efforts of those involved, we are now righting a wrong perpetrated more than 70 years ago," said Susan McCormick, the federal agent who investigated the case.

Lionel Salem, an heir to the Gentili estate, thanked US officials for their "fantastic work."

"The Gentili heirs are unanimous in wishing to convey the full extent of their immense gratitude," he said in a statement.

Further details are available by in the News section of this site.