In May 2010 the Museum of Arts and Crafts Hamburg (MKG) started systematic study of the provenance of its collection, one of the first museums of applied arts to undertake such research. The research led to the production of a number of 'biographies' of individual objects which led to an exhibition on provenance research at the Museum which opened in September 2014 and continues till April 2016 - see details below. The exhbition is a 'work in progress' reflecting developments in the research.

Researched objects and related research materials, including auction catalogues and inventory books, archival and art journals were presented in a special exhibition to give an insight into the research work. The research illustrated the need for further information about many works in the permanent collection of the Museum.

To see detailed descriptions of eight of the objects, see the pdf from the Museum here.

Exhibition text from the Museum: 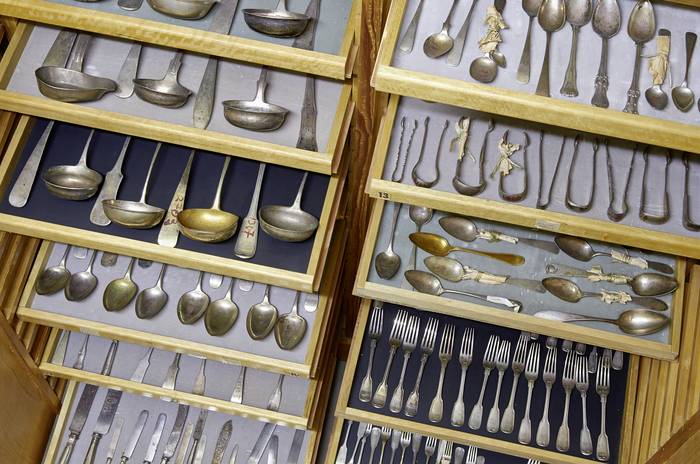 Looted Art? Provenance research on the collections of the MKG - Exhibition 12 September 2014-30 April 2016

Systematic research to establish the origins and whereabouts of objects has been a focus of the scientific work at the Museum für Kunst und Gewerbe Hamburg (MKG) for many years. Now, the MKG is giving a glimpse into its activities in the area of provenance research. The exhibition is conceived as a momentary snapshot in a continuous work in progress and traces the very diverse biographies of some 100 exhibits which have been the subject of investigation. These include art objects with authenticated proof of their provenance, but also others whose origins lie in the dark or which still need further research. The exhibits are not arranged chronologically or thematically, but according to their origin. In this way, networks and relationships between objects, the conditions under which art dealers operate and the predilections of individual private collectors are revealed. Research documentation such as auction catalogues, inventory books or art magazines make the paths traced by the researchers understandable for the observer. A special tour leads from the exhibition to additional objects in the permanent collections of the MKG. The current scientific approach allows a pro-active and systematic research process, and focuses on works of art acquired during and after the Nazi period. The exhibition, together with its accompanying catalogue, is intended to create transparency concerning the present state of the investigations, but also to make people more aware of their own history and the circumstances under which acquisitions were made in the past. This spotlights the way non-European or ancient cultural artifacts were seen and treated, the criteria which regulate the acquisition of exhibits by museums today and the need for further research and action. The MKG would like to present this important scientific discipline without focusing unduly on its results and to demonstrate its potential as well as its limits. Approaching one’s own history with an open mind plays as important a role in the exhibition as the question of the historical responsibility of a museum. This exhibition has been made possible by the generous support of Justus Brinckmann Gesellschaft and Claussen-Simon-Stiftung.