Exposing the Spoils of War: A talk by Simon Goodman in March 2017 now on video

Printer Friendly Format
Exposing the Spoils of War: A talk by Simon Goodman in March 2017 now on video 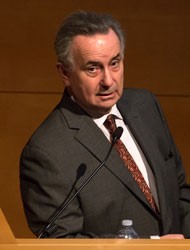 In a talk at the Getty Research Institute, Simon Goodman discussed his book, The Orpheus Clock: The Search for My Family's Art Treasures Stolen by the Nazis (2015), and his efforts to track down his family's lost art and possessions looted by the Nazis during World War II. They involved painstaking provenance research across two continents, led to the first Nazi looting case to be settled in the United States, and contributed to the first major restitution in The Netherlands since the 1950s. In his talk, he discusses the advantages of researching in the digital age, compared to the inaccessibility of the art world immediately following the war. To listen, click here.