April
Guardian 19 May 2008
By Helena Smith in Athens 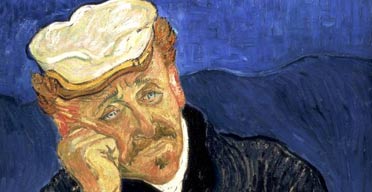 The portrait of Dr Paul Gachet that hangs in the Musée d’Orsay Photograph: Alfredo Dagli Orti


A portrait stashed in a bank vault in Athens could be the last painting Vincent van Gogh produced, according to some art experts and collectors who are attempting to determine the authenticity of the picture found among the possessions of a Greek world war two resistance fighter.

The discovery of the work, along with a notebook of sketches also purportedly drawn by Van Gogh, has raised the prospect of the post-impressionist artist having painted a third portrait of his physician, Dr Gachet, perhaps only days before a bout of insanity induced him to commit suicide at the age of 37. For art historians it would add to the controversy that has surrounded the famous painting by one of the fathers of modern art.

"A lot of interest has been expressed in the work from very big museums and auction houses," its owner, Doretta Peppa, said. "A well-known institution will soon make an announcement about its historical background that will leave no doubt it is an original work by Van Gogh."

Peppa said the portrait's colourful history began in France when the Nazis stole it from a Jewish family during the second world war. After Hitler's forces marched into Greece in April 1941 it was brought to Athens, an exhibition centre for looted treasures.

The Athenian writer claims it was "liberated" by her father, Meletis, a prominent figure in the partisan movement, during a raid on a German train in the waning days of the occupation in 1944.

"It was not the only treasure that was liberated but understanding its particular value my father kept it stored in a safe place for years," she said. Peppa put the painting in a bank vault after approaching the head of conservation at the Greek National Gallery who, after studying its brushwork and signature, told her she not only had an original Van Gogh in her possession but one of his rarer works.

Tests by other art experts supported the assessment. "It has gone through so many laboratory analyses that I am 100% convinced it is a Vincent van Gogh," said Athanasios Celia, a Paris-based painter and art historian. "We have examined and dated the materials used and there is no doubt in my mind that it is unique," he added. "As the other portraits of Dr Gachet were painted towards the end of Van Gogh's life, it also raises the possibility that this less detailed version is the last [work] he ever produced."

It had been thought that the Dutch-born artist painted two portraits of the physician who cared for him in the last months of his life. One belongs to the Musée d'Orsay in Paris. The other, sold by Christie's to the Japanese industrialist Ryoei Saito for £48m in 1990, held the distinction for 14 years of being the most expensive painting sold at auction.

But in a market where Van Gogh fakes abound, questions have also been raised about the painting in Athens. In 1990 the Art Newspaper claimed that the portrait of Dr Gachet hanging in the Musée d'Orsay was a counterfeit. The plot thickened after scholars suggested the physician may have been the source of some of the forgeries. Although the authenticity of the Van Gogh notebook found with the portrait has also been questioned - the Van Gogh Museum in Amsterdam has discredited it - Peppa says the Nazi stamp and code on the back of the painting provides added proof of its authenticity.

As the identity of its Jewish owners has not been revealed, and no one has come forward to reclaim it, under Greek law it belongs to Peppa. Some experts have valued the work at $100m (about £50m).