April
New York Times 1 August 2009
By Dan Biefsky
PRAGUE — Seventy years have passed since members of the Thorsch family fled German-occupied Czech lands in 1939. They left behind a lucrative oil refinery business that was seized by the Nazis, nationalized after World War II and then taken over by the Communist government. 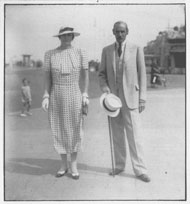 Courtesy of Marie Warburg
Marie and Alfons Thorsch in the mid-1930s before fleeing to Canada. Their granddaughter says Czech laws have stymied her attempts to get compensation for an oil refinery the Nazis seized.

Marie Warburg — granddaughter of Alfons and Marie Thorsch, who owned the Privoz refinery and escaped the Holocaust by emigrating to Canada — laments that her family has received no compensation for its loss. She says the Thorsches are blocked by a law under which only Czech citizens can qualify for restitution of businesses or homes.

Twenty years after the collapse of the Iron Curtain, restitution experts say the countries of Eastern and Central Europe are still lagging in compensating for private property seized during the Holocaust. For example, Poland, home to the largest prewar Jewish population in Europe, has not enforced legislation on private property restitution, fearful that it would prompt tens of thousands of claims.

Efforts at restitution in other countries, like the Czech Republic, remain hampered by the reluctance of governments to relax requirements the way Germany has in an effort to remove daunting or unfair legal obstacles.

“Providing proof of citizenship is a problem for the heirs of Holocaust victims, whose families were expelled or fled from Czechoslovakia or ended up in a chimney at Auschwitz,” said Ms. Warburg, an American citizen who lives in Berlin and whose German-born father was a member of the Warburg banking dynasty.

Czech officials declined to comment on the specifics of Ms. Warburg’s case. Jiri Cistecky, a senior official at the Ministry of Foreign Affairs, noted that in the last 20 years alone, the Czech Republic distributed roughly $185 million to Nazi victims, including money to care for elderly Holocaust survivors. Still, Mr. Cistecky acknowledged that Czech laws could complicate restitution efforts in some cases.

As part of an effort to improve the system, the Czech Republic held a conference in late June in Prague in which 46 countries backed the formation of an institute in a former Nazi camp, Terezin, aimed at tracking the return of Jewish property stolen by the Nazis. While the conference ended with a declaration calling for restitution, Holocaust education and improved provenance research, critics complained that it had no legal enforcement mechanism to prod recalcitrant nations to take action.

A number of Western European countries, led by Germany, carried out far-reaching measures to provide restitution of Nazi-looted properties in the aftermath of World War II, including setting up commissions to deal with heirless property and communal property illegally seized during the war. But similar efforts were stymied in Eastern Europe, where, by the end of the 1940s, the very basis of property ownership had been supplanted by socialist ideology and the nationalization efforts of Communist regimes.

Even after the fall of the Berlin Wall in 1989, restitution experts say, establishing moral and legal certainties of claims has proved elusive in a region where not only citizens but also governments view themselves as victims of Nazism and Communism.

“They say, ‘Let the Germans or Austrians do it, they were the bad guys,’ ” said Stuart E. Eizenstat, who was deputy treasury secretary under President Bill Clinton and has led the international restitution drive. “It is hard to create the political will for restitution to take place.”

Another major hurdle, many experts say, is a visceral fear among governments that citizens who had nothing to do with past crimes will be thrust out of homes or businesses or face financial liabilities for properties they acquired legally. Some countries are loath to part with artistic treasures said to have been looted by the Nazis that were long ago incorporated into national museums.

Michal Klepetar, the great-nephew of Richard Popper, a Czech who was killed in the Holocaust, said that a few years ago he learned that several pieces of his great-uncle’s old masters art collection were in the hands of the National Gallery in Prague. But according to the Holocaust Act of 2000, he does not qualify for restitution, because he is not a direct heir, even though Mr. Popper’s wife and daughter were also killed by the Nazis. His disqualification, Mr. Klepetar asserted, conflicts with Czech inheritance law, which allows nephews and nieces to claim property. The National Gallery declined to comment.

Ms. Warburg said her efforts were a matter of principle as well as a responsibility toward her mother’s family, the Thorsches, who have roots in the Czech Republic dating from the 16th century, when family lore suggests that they emigrated to Prague from Toledo, Spain, during the Inquisition.

In the 1880s, the Thorsch family provided financing for the establishment of Privoz, the refinery eventually bought out by her grandfather, Alfons Thorsch. The family had moved to Vienna from Prague in the 1870s, when Jews were being persecuted, and became prominent bankers.

By the 1930s, Privoz had 10 percent of the Czech energy market and owned 202 rail cars to export oil.

One month before Austria was incorporated into Nazi Germany in March 1938, Alfons Thorsch, his wife and one of their five daughters, Marie’s mother, fled from Vienna to Canada. Her uncle, a Czechoslovak who was living in Prague and had been director of Privoz, fled Nazi-occupied Czechoslovakia one year later.

Within weeks of her family’s escape, Ms. Warburg said, the oil refinery in Moravia — a region east of Prague with important industries — was occupied by the Nazis, who fired all of its directors, some of whom ended up in concentration camps. The Nazis then invested tens of millions of dollars in refurbishing the plant to help fuel the German war effort.

When World War II ended, Ms. Warburg said, the refinery was nationalized under the Czechoslovak government of President Eduard Benes.

Ms. Warburg said the family’s efforts to gain restitution during the Communist era had proved fruitless because the state was ideologically opposed to private property. In the early 1990s, after the fall of Communism, the Czech Republic established restitution laws that required those seeking compensation for homes or businesses to be citizens of the Czech Republic, effectively pre-empting Ms. Warburg from making any legal claim.

Legal experts say she could file a case in a Czech court under the so-called Benes Decrees of 1945, which are still legally valid and stipulate that those whose property was nationalized by the state and were victims of National Socialism should receive compensation.

Yet experts say the Czech government has thus far proved ill disposed to enforce the decrees for fear of unleashing a torrent of claims from Sudeten Germans, millions of whom were driven from their homes in Czechoslovakia after the war.