During the darkest days of World War II, a ragtag band of British and American art scholars braved the battlefields of Europe to rescue thousands of cultural treasures from Nazi pillage and the collateral damage of armed conflict. These “monuments men’’ propped up collapsing buildings; repaired battle-scarred frescoes and mosaics; guided Allied bombers away from world-renowned libraries and cathedrals; and tracked down the secret hiding places of masterworks by artists such as Rembrandt, Raphael, and Leonardo da Vinci. But today their story - one of the grandest yarns of the Greatest Generation - remains little known outside the art world. 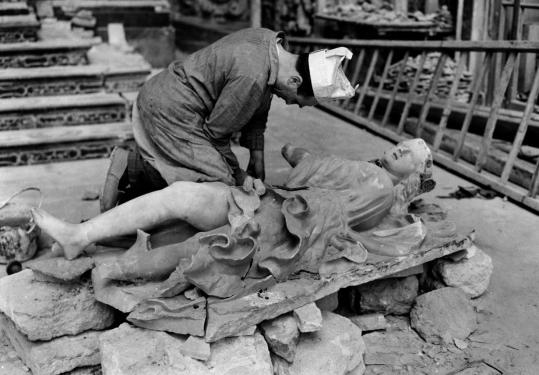 A laborer repairs a statue at the church of Casa Professa in Palermo, damaged in an Allied bombing raid in 1943. (The National Archives At College Park)

Two new books aim to remedy that situation. “The Monuments Men: Allied Heroes, Nazi Thieves, and the Greatest Treasure Hunt in History,’’ by writer and documentary film producer Robert Edsel, offers a stirring treatment, geared to the broadest of popular audiences. “The Venus Fixers: The Remarkable Story of the Allied Soldiers Who Saved Italy’s Art During World War II,’’ by journalist Ilaria Dagnini Brey, presents a more nuanced account - much of it based on archival research - but with a narrower focus, dealing exclusively with operations on the Italian peninsula.

Edsel, author of “Rescuing Da Vinci,’’ a pictorial history of World War II art recovery efforts, approaches his subject with an enthusiasm that is likely all the keener for having been reached by a circuitous path. Now 53 years old, the Texas-born Edsel earned a substantial fortune at a young age in oil exploration, an industry from which he retired in 1995. Soon thereafter, he found a new purpose in life while reading Lynn Nicholas’s then-recent book “The Rape of Europa,’’ which has since become the standard work in English on Nazi art looting. Fascinated by the topic, Edsel tracked down Nicholas and offered to finance a documentary based on her research. The film, narrated by Joan Allen, appeared to wide acclaim in 2007.

In “The Monuments Men’’ (written in collaboration with Bret Witter), Edsel strives to give his heroes the two-fisted, John Wayne treatment he feels they deserve. Structured as a series of swift cinematic scenes, the book is at times overly theatrical - there are, for instance, too many interior monologues purporting to narrate people’s thoughts - but it is nonetheless a difficult work to put down.

Edsel is particularly adept at capturing the quirky personalities of the individual monuments men, from the moody and flamboyantly gay Lincoln Kirstein, who later founded the New York City Ballet, to the indomitable James Rorimer, subsequently director of the Metropolitan Museum of Art. Shortly after the invasion of Normandy, we are told, Rorimer summoned up his “bulldog determination’’ when he spotted an American wrecking detail demolishing the walls of an inconveniently situated chateau. Rorimer launched into a shouting match with the commanding officer, who agreed to relent only when the irate art historian began snapping photographs and threatening to send a report to headquarters.

The bulk of Edsel’s book narrates the efforts of the monuments men to track down artworks stolen by the Nazis from Jewish collectors and conquered nations. When the tide of the war had begun to turn against them, Hitler’s minions hid this loot in mines, caves, and castles throughout occupied Europe. The largest cache - 6,714 paintings and sculptures, including Vermeer’s “Art of Painting’’ and Van Eyck’s Ghent altarpiece - was found in the salt mines of Altaussee in Austria. It was only by chance that these works survived: A junior SS officer had disobeyed repeated orders to blow up the horde.

The situation in Italy, as described in meticulous detail by Brey in “The Venus Fixers,’’ was somewhat different than in other parts of the European theater. Fighting on Hitler’s side in the war, Italy did not have to contend with the Nazis’ wholesale confiscation of art - at least not until 1943. That was the year of the Allied invasion, which prompted a popular uprising that overthrew Mussolini. The Germans then installed a despotic puppet government and dug in for a protracted and destructive battle with Patton’s advancing army. Slowly forced northward, the Nazis engaged in a punitive spree of cultural vandalism, dynamiting the historic bridges of Florence and stealing any important art that they could lay their hands on.

Brey, who is Italian by birth, makes a significant contribution by delving into previously unexplored Italian archives to flesh out the perspective of the native population amid the chaos of war. Her description of the sincere, if hapless, efforts of the Italian cultural authorities to protect their own patrimony makes for sobering reading. It also sets the stage for the warm embrace that the monuments men received when they set to work cataloging missing masterpieces and mitigating the destruction left in the wake of the Nazis.

Brey’s curious title, “The Venus Fixers,’’ refers to an alternate sobriquet for the monuments men, bestowed upon them derisively by regular army officers who saw little need for meddlesome art historians in a war zone. Although understandable, that view was short-sighted. “While to some comrades the Venus Fixers may have looked like devoted and thorough housemaids, straightening, dusting, rearranging,’’ Brey notes sagely, “they were actually watching over a civilization’s tremendous heritage at a crucial time in its history.’’

Jonathan Lopez is the author of “The Man Who Made Vermeers,’’ a biography of the art forger Han van Meegeren.