Heir to Jewish refugees given US court backing to reclaim masterpiece 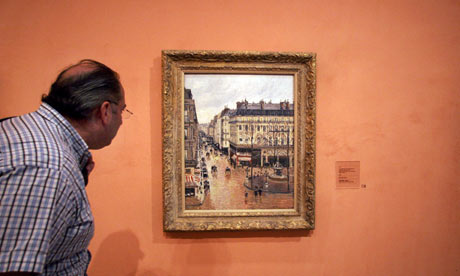 A visitor looks at the Impressionist painting by Camille Pissarro in the Thyssen-Bornemisza Museum in Madrid. Photograph: Mariana Eliano/AP

In 1939 Lilly Cassirer Neubauer was desperate to escape Germany. She was a member of a prominent Jewish family of publishers and gallery owners, and as the Nazi oppression escalated, it was clear they would have to leave or die.

Lilly was told there was only one way for her to obtain an exit visa. The family would have to hand over one of their most prized possessions: a Parisian street scene painted by Camille Pissarro.

The work, an atmosphere depiction of a rain-soaked Paris boulevard, had hung on the walls of the family's Berlin and Munich homes since the impressionist painted it four decades earlier.

A Nazi-appointed art appraiser valued the painting at $360, an absurdly low sum, but the deal enabled Lilly and her husband Otto to escape.

The work, entitled Rue Saint-Honoré, Après-midi, Effet de Pluie, is today estimated to be worth $20m. It hangs in Madrid's Thyssen-Bornemisza museum.

This week, a court in Los Angeles ruled that Lilly's grandson, Claude Cassirer, can continue a lawsuit against the museum and the Spanish state to recover the painting. The decision by the US appeal court is the latest in a string of cases around the world, as heirs to some of 600,000 owners of artworks looted by Hitler's Germany demand their property back.

Cassirer, 88, a retired portrait photographer, is the sole heir of Lilly. Four years before her death in 1962, the then West German government acknowledged she was the legal owner, and awarded her 120,000 marks in compensation. But in the chaos of war and its aftermath the painting itself had disappeared.

It was not until nine years ago that Cassirer discovered the painting had been sold during the second world war and since changed hands several times. In 1976 it was bought by Baron Hans Heinrich von Thyssen, and passed to the Spanish state when it bought much of the baron's collection, installed in Thyssen-Bornemisza museum, for $327m in 1993.

The Spanish government initially refused to discuss the issue with Cassirer; concluding the painting was not going to be returned, he launched his suit in 2005.

At the time he claimed that, by refusing to return the painting, the museum and the government were "continuing the Nazi legacy instead of going out of their way to repudiate it".

His attorney, Stuart Dunwoody, said that Cassirer had a long fight ahead. "He hopes to see justice in his lifetime," he said. "He's 88 years old, so we need to keep things moving along."

Sources at the museum said yesterday that it was confident the painting would stay there. The Thyssen-Bornemisza Foundation, owner of most of the pictures, called the claim completely baseless.

"The painting was acquired legitimately by the foundation in 1993, along with the rest of the Thyssen-Bornemisza collection," it said in a statement. The musem said Cassirer had still to prove to the US courts that he had exhausted all lines of recourse in Spain and Germany.

"The foundation has been the peaceful owner of the picture ever since its purchase and has exhibited it permanently, so there can be no question of its ownership," it added.

America has been a good place for claimants to chase looted Nazi art ever since the supreme court allowed Los Angeles resident Maria Altmann, 88, to sue Austria for five Gustav Klimt paintings valued at $150m. The paintings were handed over in January.

Earlier this week the Moderna Museet in Stockholm settled a similar case: an anonymous art collector agreed to buy German expressionist Emil Nolde's work, Blumengarten (Utenwarf), from the heirs of Jewish businessman Otto Nathan Deutsch for an undisclosed sum; it is worth is worth up to $6m. Under the deal, the heirs will return compensation paid by Germany in 1961, and the work will remain on loan to the Moderna for up to five years. "Both the Deutsch heirs and the Moderna Museet are satisfied," said museum director Lars Nittve.

The Nolde painting had vanished when Deutsch fled Germany in 1939 but reappeared in a German gallery catalogue in the early 1960s.

In 2006 Maria Altmann, 90, won a court battle to reclaim one of the Austrian master's most famous gold-encrusted portraits of her aunt, Adele Block-Bauer, a leading Vienna socialite and the wife of a Jewish sugar industrialist. In 1938 Altmann, a young newly-wed, witnessed the Nazis take the portrait and four other Klimt works from the family home. Five valuable Klimt paintings were eventually handed over by the Austrian government to Altmann and other family members after a seven-year legal battle. The cosmetics magnate Ronald S Lauder later bought the Klimt portrait at auction, reportedly paying more than $130m.

In 2006, after years of negotiations with Berlin authorities, this masterpiece of German expressionism looted by the Nazis was returned by the Berlin Brucke museum to the family of Alfred Hess, a German Jewish shoe-factory owner. It had been seized by the Gestapo in 1936. Hess's heir, Anita Halpin, head of the UK communist party, later sold it for £20.5m.

Seized by the Nazis in 1941 after its Jewish owners fled persecution in Germany, this landscape by the French artist ended up in the hands of an SS officer responsible for delivering poison gas to Auschwitz. The officer committed suicide in prison in 1945 and the painting was discovered three years later. Last year, the picture appeared in a major Jerusalem and Paris exhibition of Nazi-looted art whose rightful owners had yet to be traced. A German historian was able to identify the heirs of the original owner and it was returned by the French government last November.

The Austrian impressionist painted this key landscape of his mother's birthplace in 1916. The textile manufacturer Wilhelm Hellmann and his wife Daisy, family friends of Schiele's, bought it directly from the artist, but the Nazis seized the picture from their apartment in Vienna in 1938. From 1953, it hung in the Neue Galerie in Linz, Austria, until it was restored to the Jewish collectors' heirs in 2003, after years of wrangling. It fetched a record £12.6m at auction in 2003.

The Picasso portrait, estimated to be worth $12m, became the subject of a legal dispute in 2002. The Chicago owner of the painting said her husband had purchased it in 1975 from a reputable New York gallery and had no knowledge of any improper history. Thomas Bennigson, who claimed the painting was looted from his Jewish grandmother who fled Berlin in 1938, filed a lawsuit. The case was settled three years later out of court.