Artefacts in national museums found to have been looted by the Nazis can now be returned to their rightful owners, thanks to newly-passed legislation. 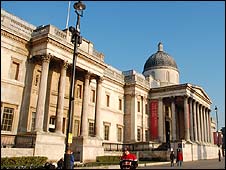 The Holocaust (Stolen Art) Restitution Act gives national institutions in England and Scotland the power to return art stolen during the Nazi era.

The bill was introduced earlier this year by Labour MP Andrew Dismore.

The act, he said, would "right a long-standing injustice" and marked "an important moral step".

The MP for Hendon said it was "an important moral step" that had been supported by all political parties.

The law, which has been supported by all political parties, enables national museums and galleries in England and Scotland to act on the recommendations of the Spoliation Advisory Panel.

Formed in 2000, the panel resolves claims from people, or their heirs, who lost property during the Nazi era which is now held in UK national collections.

Since then there have been nine cases of artefacts held by British museums adjudged to have been stolen from their rightful owners.

However national institutions, like the British Museum or the Tate, had been forbidden from returning items by legislation preventing them from disposing of artwork in their collections.

Instead the institutions in question would make an ex-gratia payment based on a valuation of the item, in lieu of returning the item itself.

Examples of this include a £125,000 payment made by the Tate in 2001 to the former owners of a painting by Dutch artist Jan Griffier.

In 2006, the British Museum paid £175,000 to the heirs of an art collector whose Old Master drawings were stolen by the Nazis.

The new legislation allows institutions to return those disputed works of art judged to have been looted between 1933 and 1945.

In Wales and Northern Ireland, museums already have the power to return disputed items.

Culture minister Margaret Hodge said it was "a wonderful day" for families who "suffered so terribly during the Nazi era".

"For too long families who had heirlooms stolen from them by the Nazis were unable to reclaim them, although they were the rightful owners."

Anne Webber, co-chair of the Commission for Looted Art in Europe, said this was "a great step forward" that confirmed Britain's "commitment to providing justice".