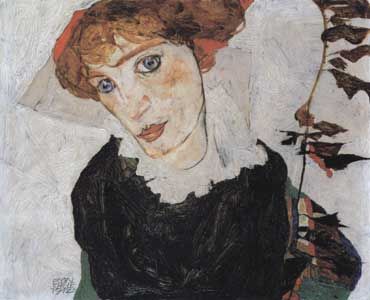 After 11 years in US District Court in New York, and three weeks from trial in Manhattan, the legal dispute over Egon Schiele’s Portrait of Wally could be closer than ever to a resolution.

Sources in Vienna report that the parties have agreed on general terms of a settlement. They note that the terms were reached before the death of the collector Rudolf Leopold at the age of 85 in Vienna on 29 June.

According to observers in Viennese legal circles, the Bondi family -- heirs of the art dealer Lea Bondi Jaray, who fled Vienna in 1939 after her art gallery was seized in a Nazi aryanization -- will receive $20 million from the Leopold Foundation in compensation for Schiele’s 1911 portrait of his mistress, Walerie Neuzil.

The painting will return to the Leopold Foundation in Vienna, where it will hang next to the Schiele Self-Portrait of 1911 that has become a logo of the museum. The two portraits were painted as a pair. It is not yet clear whether the pre-war provenance and current dispute over Wally will be presented in a wall panel at the museum, although the painting’s labeling is part of the settlement, sources said.

Wally was valued at some $1 million at the time of its seizure by New York State prosecutors in 1998. $20 million represents the high range of its current estimated value. The London Schiele dealer Richard Nagy put its value at $13 million-$15 million last week.

The compensation funds will be raised, insiders say, from sales of works from the Leopold Collection, which holds some 5400 objects, including 250 works by Schiele.

At the Leopold Museum, Diethard Leopold, the son of Rudolf Leopold and a newly-appointed member of the museum’s board, would not confirm that the case had been settled, but said, “I think we are very close.”

Reached in New York, Howard Spiegler, attorney for the Bondi family, declined to comment on ongoing litigation or on possible settlement talks. “All I know is that we are on for trial on 26 July,” he said.

Portrait of Wally has been in the United States since October 1997, when it was included in a loan of some 150 works exhibited at the Museum of Modern Art. In December 1997, members of the Bondi family spotted the painting and asked the museum to hold the picture in the United States to determine its ownership before World War II. When the museum refused, citing the terms of its contract with the lender, Manhattan District Attorney Robert Morgenthau intervened in January 1998 and placed Wally (and Dead City III of 1912, another allegedly Nazi-looted work) under subpoena as part of an investigation into whether the pictures were stolen objects brought illegally into New York State.

Extensive coverage in The New York Times at the time made a public debate of the issue of unrecovered art that was stolen from Jewish families and others during the Nazi Era. Museums in the US and Europe compared Morgenthau’s strategy to hostage-taking and predicted the decline of international loan exhibitions.

In Austria, museum officials condemned the seizure “insulting” and “reckless,” yet Viennese journalists revealed that the country’s national museums still held many unreturned works of art that the Nazis had seized from their owners. In 1998, the Austrian Parliament unanimously passed a law mandating the accelerated restitution of works in national museums that were found to have been looted. The seizure of Wally and Dead City were the impetus for the law, yet the Leopold Foundation, as a private foundation (privatstiftung), lay outside the law’s jurisdiction.

In 1999, after New York State courts quashed the Morgenthau subpoena, Dead City III was returned to the Leopold Museum. Wally was seized by US Customs, and is the subject of a civil forfeiture proceeding in US District Court in which the US Government will determine whether Leopold knew the picture was stolen when he obtained it in 1954 by bartering another Schiele with the Austrian National Gallery.

In 1994, Leopold transferred ownership of his collection of 5400 works to the state-funded Leopold Foundation, for which the Austria government paid €160 million and agreed to build and operate a museum. The Leopold Museum opened as part of the Museumsquartier ensemble in 2001. (The museum's collection could expand if Leopold's collection acquired since 1994, called Leopold Collection II, enter its holdings.)

Throughout the dispute, Leopold, an ophthalmologist, has chafed at any association or comparison with Nazis and insisted that he never knew that Wally had been stolen.

Just as word of the Wally settlement leaks out, the Leopold Museum faces another claim. The heirs of the collector Jenny Steiner, represented by the Viennese lawyer Alfred Noll, are asking the Leopold Foundation to return Hauser am Meer (Houses on the Sea), a work that Schiele painted in 1914 and Leopold acquired in 1955. The picture is valued $20 million.