Valuable china that survived the Nazis 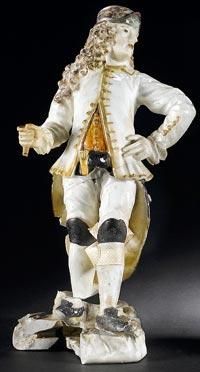 The remnants of an extraordinary collection are to go, almost literally, under the hammer. Broken china and perfect pieces, part of the Meissen china collection assembled by Gustav von Klemperer, the Jewish chairman of the Dresdner Bank, are for sale at Bonham's in London on December 8.

The survival of the collection and the von Klemperer family is a remarkable story, recalled by Gustav's great-grandson, Victor, from his home in New York. "Gustav died in 1926. He had three sons, my grandfather and two great-uncles, who each had four children. So by the 1930s there were 12 cousins, including my father, and they all dispersed from Dresden and Berlin, some for Australia, and some, including my grandparents, for southern Africa."

Gustav von Klemperer, born in 1852, collected Meissen china and amassed 834 pieces, commonly held to have been the greatest ever collection of Meissen porcelain. There were plates, figurines, vases, china animals, a chandelier - all identified by Gustav in a catalogue still held by the von Klemperer family. The Nazis had their eyes on the Meissen collection and at one point offered Victor's grandfather money for it, which he turned down.

"They were looking for an excuse to confiscate it," said Victor. "They wanted to display it in what would have been Hitler's own museum in Austria." When Victor's grandfather and father left Germany just after Kristallnacht, in 1938, the Nazis seized it.

"Initially, it was put into a number of crates which were dispersed throughout Saxony, mainly to places that it was hoped the Allies would not bomb." By 1943 the china was stored just outside Dresden, but as the war ended and the Russians advanced, fear arose that the Russians would confiscate the collection for themselves.

On the night of February 13 1945, the Allies bombed Dresden. The collection was severely damaged and what was left remained in east Germany until the collapse of the Berlin Wall in 1989. Victor's father had moved back to Germany from Rhodesia in 1980 and had made fruitless attempts to reclaim Gustav's collection, only to be rebuffed by the east Germans who insisted there was no such thing as private property.

Finally, the Berlin Wall came down and the family received what they thought to be the remains of the collection, some of which was later sold.
"But about 18 months ago the Dresden Museum discovered an additional three or four boxes in its basement." After restorative work, these contents are being sold in London.
Victor will be at the sale, and who could blame him if he hankers to make a bid himself for one last souvenir?