An Austrian museum is to sell a prized Egon Schiele painting to cover the $19m (£11.5m) cost of recovering another of the artist's works. 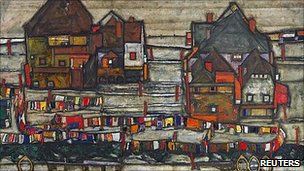 The Leopold Museum says proceeds of the 1914 Houses with Colourful Laundry (Suburb II) will pay the loan it took out to recover Portrait of Wally.

The museum paid the money to a Jewish art dealer's estate as the painting had been stolen from her by the Nazis.

The settlement last year ended a 12-year-long US legal battle.

The museum, in Vienna, has always insisted it acquired the painting in good faith from legitimate postwar owners.

Under the settlement, the Leopold Museum must display Portrait of Wally with an acknowledgment that it was stolen from a Jewish art dealer by a Nazi agent.

Legal proceedings began when the work was loaned to New York's Museum of Modern Art by the Leopold Museum in 1997.

US officials seized the work in 1998 on suspicion that it had been stolen from Lea Bondi Jaray, who died in 1969.

The Leopold Museum says the auction of Houses with Colourful Laundry (Suburb II) will take place on 22 June at Sotheby's in London.

"The painting is unquestionably one of the greatest Schiele oils ever to come to the market," said Helena Newman of Sotheby's.

She said it had only been in two great collections since the artist painted it.

The painting is loosely based on scenes from the southern Bohemian town of Krumau, where Schiele moved to with his lover Walburga Neuzil (Wally) in 1911.