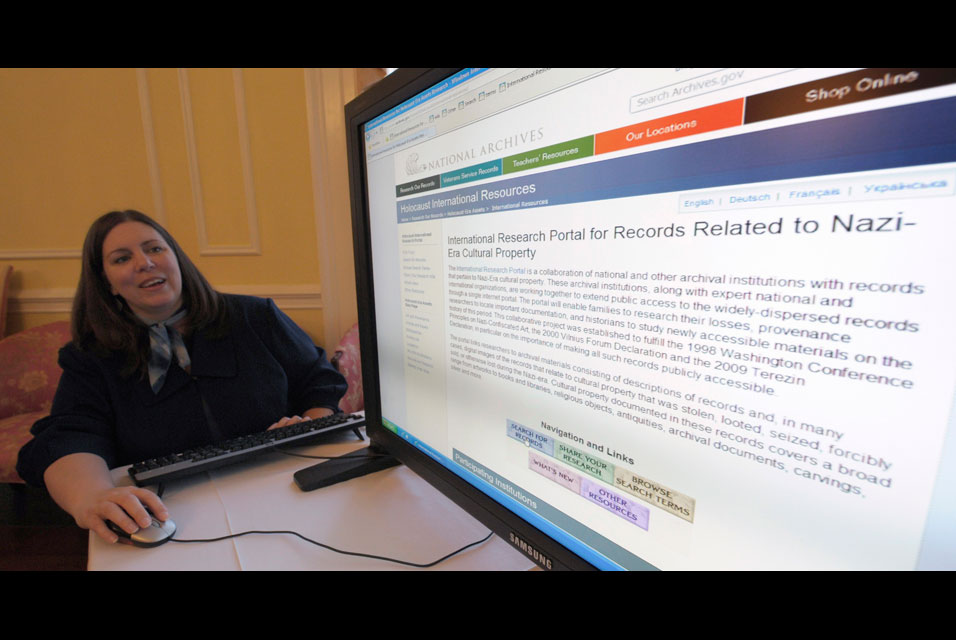 A National Archives signing ceremony today launched the new database, providing digital access to millions of Nazi-era cultural property–related records through a single Internet portal for the first time. The portal extends public access to the widely dispersed records that will enable families and institutions to research their losses, provenance researchers to locate important documentation, and historians to study newly accessible materials on the history of this period.

At the forefront of Holocaust restitution research efforts for over 15 years, the U.S. National Archives has strived to identify its records and to make them widely available and accessible to all. I am pleased to announce our most exciting achievement yet: researchers from all over the world will now be able to use a single point of entry to gain digital access to these widely dispersed archival materials. Heading up this internet portal is just the latest move in a long series by the U.S. National Archives to bring this long-hidden era to light.

Records in the U.S. National Archives have been used to determine the extent of Nazi looting of monetary gold and the extent to which that gold was recovered by the Allies and restituted. Such records have been used in determining what works of art were confiscated and looted by the Nazis and where the unrecovered artworks may now be located. These records have been used to identify dormant bank accounts in the United States and abroad, and insurance policies that were never claimed. In addition, they have been used to determine the amount of non-monetary gold (dental gold, for example) that the Nazis took from their victims. In these ways as in many others, National Archives holdings are important to establish facts that enable histories to be written, lawsuits pursued, and the truth uncovered. National Archives experts have testified on Capitol Hill and spoken at seminars and conferences worldwide about these records and what they reveal.

It started in March 1996 with investigations looking into looted gold and Jewish bank accounts. In 1997 art works and insurance, and non-monetary gold [that is, victims' gold from the death camps, such as dental gold], and the role of the Vatican were added; in 1998 slave labor, alleged American and foreign bank misdeeds; looted archives and libraries; and Jewish communal and religious property were being studied. Research then broadened to encompass looted diamonds and securities, as well as the role of American corporations in their dealings with the Nazis.

Since March 1996, the National Archives at College Park, Maryland has been visited and/or contacted by thousands researchers interested in records relating to Holocaust-Era assets. Many of those researchers have spent weeks, months, and even years at Archives II going through millions of documents. Foreign researchers and representatives of a dozen foreign commissions looking into their countries' handling of victim assets found the National Archives an important resource to supplement the information available in the archival records in their own countries. Representatives of foreign banks, governments, archives, museums, and corporations have also come to do research.

Growing out of the desire to declassify still-classified government records, Congress in October 1998 enacted the Nazi War Crimes Records Disclosure Act of 1998. This law required Federal agencies, including the National Archives, to review and recommend for declassification records relating to Nazi war crimes, Nazi war criminals, Nazi persecution, and Nazi looted assets. The National Archives was asked to chair the multi-agency Nazi War Crimes and Japanese Imperial Government Records Interagency Working Group (IWG). The IWG’s mandate was to identify and declassify as much as possible the remaining classified U.S. government records about war criminals and crimes committed by the Nazis and their allies during World War II. By the time the IWG work ended in 2007, over 10 million pages were declassified and made publicly available.

Then Undersecretary of State Stuart Eizenstat noted in his keynote address at the National Archives Symposium on Holocaust-Era Assets Records and Research, December 4, 1998:

It is truly remarkable to reflect on the sheer amount of research that is being conducted and the new archival sources that has been unearthed in just the past few years… I am particularly proud to say that our country was a leader in this effort to advance the process of archival research…The National Archives…has become a focal point of research, scholarship, and remembrance into the issues surrounding Holocaust-era assets… The National Archives can be proud of the positive role it has played both in bringing justice, however belated, to the survivors and memory to the deceased.

By the end of 1998, the importance of archives as a result of Holocaust-Era Assets research had been clearly demonstrated. U.S. News & World Report noted that "since 1996, when the Holocaust restitution effort gained new momentum" archival institutions "have become drivers of world events. Their contents have forced apologies from governments, opened long-dormant bank accounts, unlocked the secrets of art museums, and compelled corporations to defend their reputations."

Records from the U.S. National Archives in Nazi-Era Records Internet Portal
The records available through the Portal from the U.S. National Archives include over 2.3 million pages of documents created or received by the U.S. Government during and after World War II as part of its investigations into cultural assets that were looted or otherwise lost during the war. These records document the activities of several U.S. Government agencies involved in the identification and recovery of looted assets, including the Office of Strategic Services (OSS) and U.S. occupation forces in Germany and Austria. The materials also contain captured German records regarding the seizure of cultural property, such as the Einsatzstab Reichsleiter Rosenberg (ERR) card file and related photographs. The records have been digitized and made available online by Footnote.com through a partnership agreement with the National Archives. The records are primarily in English, although some seized records are in German or other languages. There are no privacy or other access restrictions on the records.

The National Archives online Archival Research Catalog (ARC) provides a description of many of these records [www.archives.gov/research/arc/topics/holocaust/series.html]. From the ARC description, click on the URL provided in the “online resource” section to be directed to the digitized records on Footnote.com. The digitized records on Footnote.com are available free in all National Archives research rooms and many large libraries, or for a fee by subscription. In recognition of the importance of these materials and this new international portal, Footnote.com will make all of their Holocaust-era records freely accessible for the entire month of May.