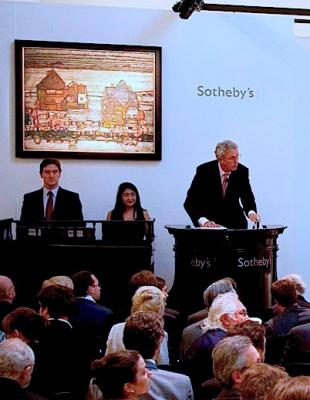 Sotheby's  has set a record price for the Viennese Secessionist painter Egon Schiele. The landscape titled "Hauser mit bunter Wasche 'Vorstadt' has sold for a staggering £24.7 million or $40.1 million at a London auction held yesterday. Last year, a US court ruling demanded that a leading Austrian museum, pay $19 million (£11.52 million)in compensation to the heirs of Lea Bondi Jaray, the owner of a disputed portrait by Schiele, also in the collection of the museum. It was stolen from an apartment in Vienna by Friedrich Welz, a Nazi officer, who insisted it form part of the sale of the dealer's business to him. She later fled Vienna for London. This was one of the tactics used by the Nazi's to rob Jewish families of their wealth. This wasn't deemed unlawful until new laws were passed in Europe, in the 1990's. The portrait remained in a private collection until The owner donated it to the Leopold Museum in the 1990's.  Mrs Jaray died in London in 1969. The family renewed its claim on the painting when it was loaned to the MOMA NY in 1997. The cityscape, sold yesterday was one of eight held by the Leopold museum. It was painted in 1914 at the peak of Schiele's career. He died four years later at the age of 28 of Spanish Flu.

The decision, handed down by a U.S. District Judge rendered unnecessary a planned trial, in New York. The court was to rule whether or not the museum had known that the portrait painting on loan, was stolen when it was brought into U.S. boarders, for a show at the Museum of Modern Art, in 1997.

Only three other notable Schiele cityscapes have been offered for auction in the last decade. The previous record was in 2006 when a landscape sold for $22.4 million. Last night's painting was purchased by a yet to be named buyer.