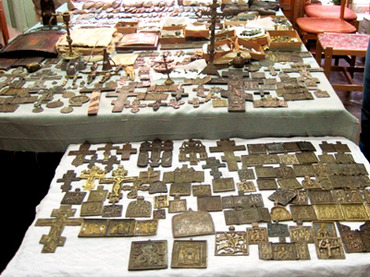 
Treasures stolen from a Russian museum during WWII have found their way back home. Two crates with hundreds of rare exhibits stolen in 1941 were voluntarily returned to Russia by a Wehrmacht doctor’s son.

­A museum in the city of Tver, north of Moscow, received the unexpected parcel. The 480 objects including a collection of crosses, archeological findings and icons stunned employees – many of the objects are extremely rare and valuable.

“We are still opening the parcels and are already bowled over,” Tver State United Museum leading scientific employee Svetlana Gerasimova told KP daily. “The collection of crosses alone has around 100 items… We are still exploring the contents.”

Before the outbreak of WWII, the museum stored its exhibits in a local cathedral. In 1941 when the city was captured by Nazi troops, the collection disappeared.

According to KP Daily, a Wehrmacht doctor who was with the troops, got access to the storage and saw that the museum’s objects were real treasures. He sent them to Germany. The man died in Russia in 1942, yet the treasures survived.

The doctor’s widow asked her son to return the stolen objects where they belonged. It took him a while however to settle all legal issues and complete the deed.

The man who returned the treasures to the Russian museum wished to remain anonymous.