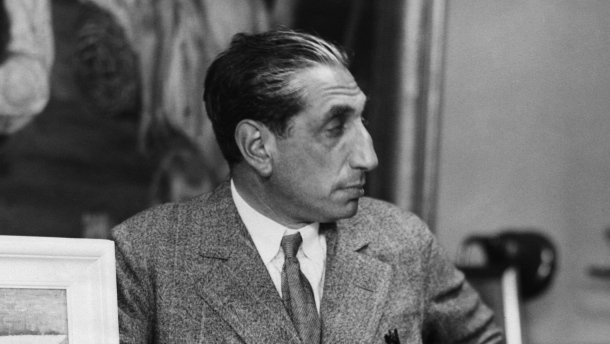 After 1933, the works of art from the collections of the Jewish gallery owner Alfred Flechtheim by Picasso, Klee and Beckmann were scattered. Some can still be found in German museums. They have now published a database on the Flechtheim art works - but without the heirs' participation.

If there is a restitution case which has long been holding the breath of German museums, it is that of the legendary art dealer and collector Alfred Flechtheim. As a Jew he was defamed before 1933 in Germany. After the takeover of power by the Nazis, he lost his fortune, his gallery inventory, his home and eventually his life. Flechtheim's private collection and his gallery inventory were scattered all over the world. Numerous German colleagues helped themselves openly, many works then came to German museums. They differ in their approach to requests for information or return. Some museums have already reacted to dispel the suspicion of looted art through careful research. Others, such as the Kunstmuseum Bonn, have found it confirmed and are in negotiations for a 'fair and equitable solution' that all public museums in Germany recognise as morally binding since the 1999 German Declaration. As a result, Bonn was then able to keep a painting by Paul Adolf, Cologne had to part with Oskar Kokoschka's 'Portrait of the actress Tilla Durieux'.There is significant uncertainty in other affected museums - and reluctance to comment on the issue at all.

The Flechtheim heirs - among them 67-year-old Michael R. Hulton - long in vain for signs of movement from other museums. The art collection of North Rhine-Westphalia has two paintings by Paul Klee and Juan Gris, claimed by the heirs. In Munich there are six works by Max Beckmann,and like the works of Klee and Gris, there are at least open questions. The General Director of the Bavarian State Painting Collections in Munich, Klaus Schrenk, however, unilaterally declared the Flechtheim case closed in 2010.  The lawyer for the family, Markus Stötzel, was told by Schrenk and his counsel in writing that they would henceforth simply no longer consider any contact with the lawyers appointed by the Flechtheim heirs.

In Cologne you go on distance

And now,calculated these museums, which often employed only short-term provenance researchers, let's distinguish ourselves with a common project on Alfred Flechtheim and show how transparent we supposedly are in dealing with his works. Fifteen museums between Hamburg and Munich will show from Wednesday those works that once passed through the hands of Alfred Flechtheim. A database will tell the story of former Flechtheim paintings and sculptures from the perspective of museums.

However, no one asked Michael Hulton if he wanted to make the name of his great-uncle available for this project or wanted to make it available for an advertisement by German museums ofr their supposedly good terms with the Nazi looted art problem. Only when the plans were well advanced and the museums had already, without consultation with the heirs, set up a website with the name of the legendary Jewish art dealer Alfred Flechtheim, did a letter arrive from Munich with a request for "emotional and physical support." There, in the Bavarian State Painting Collections, was masterminded what would be presented to the public on Wednesday at a press conference in Dusseldorf.

The project is controversial even in museum circles. Different museums, whose names were initially listed, have canceled their participation. In Cologne, for example, neither the Museum Ludwig or the Wallraf-Richartz Museum are still directly involved. Only recently newly hired provenance researchers for the city are involved. Museums gave as their reason for the reluctance to participate unease about dealing with Flechtheim and his fate. Thus, in the first published texts of the project there was no mention of the fact that Flechtheim had been defamed massively prior to 1933 as a Jew, nor that the Nazis ruined him economically and that the Gallery was taken over in 1933 after Flechtheim's flight into exile by his "Aryan" Managing Director and member of the NSDAP and SA, Alex Vömel. Instead, they wrote euphemistically "Based in London, he continued his work as an art dealer" and "Whether he deserved that money, but we do not know".  Now, however, curator Julian Heynen admits that the art collection of North Rhine-Westphalia in Dusseldorf is coordinating activities. Even the tragic fate of Flechtheim's wife Betty was inadequately represented in the first announcements, complained a curator from southern Germany - no word that in 1936 Flechteim gave numerous works of art on commission to an art dealer Carel van Lier. As Flechtheim died in exile in Britain a year later, the Dutchman simply auctioned off the pictures on his own account, without informing Betty Flechtheim. Buyers at that time included German art dealers, beneficiaries were the museums.

Unilateral work from the perspective of museums

Even the Prussian Cultural Heritage Foundation (SPK) in Berlin, where Flechtheim had his gallery and maintained a lavish presence, is not among the participants. The official declaration of the Foundation, co-financed by the federal government, points in a refreshingly clear way to the second big problem of the museum project: There is still no consensus on a position nor a solution for dealing with those former Flechtheim-works in the public domain, which the dealer and his family were dispossessed of under Nazi pressure: "We have always positioned ourselves publicly only on completed restitution requests. We have always avoided public assessments or positions before the completion of inquiries and requests for return, and as a result had good experience in relation to the parties involved whether inquirer or claimant".

When, before the joint press conference, enquiries were made in Bonn and Karlsruhe, Frankfurt or Stuttgart, Hannover or Dortmund, Bremen and Dusseldorf on the specific implementation and details of the project, enquirers were referred to the press office of the Bavarian State Painting Collections. It is the central controller of the joint project but claims not to be entirely happy: "We would have liked more documentation than is now possible. Also open questions about the origin of the works could be addressed more clearly but in a joint editorial meeting the need for a uniform approach was agreed - also there was an alleged lack of space". The database of former Flechtheim works would be a valuable tool for further research. In fact, it lists partly detailed provenances.But by waiving the involvement of the family and their documents, it cannot be comprehensive or complete. Unfortunately it also lacks any explanation, for example, about the Flechtheim ownership, so that lay people will hardly understand what changes in ownership allow what conclusions to be drawn about rightful or illegitimate ownership. They said they wanted to build a scientific database based on facts and not on interpretations of lawyers. However, this is more than arrogant: Firstly, many family representatives work with very reputable historians in restitution cases. Secondly, the past has shown that - as in the case of the Cologne Kokoschka painting - even museums are quite willing to interpret facts unscientifically in their own interest. Why so far have not even a dozen of them since 1999 called on the special purpose Limbach Commission to deal with disputed cases? The web database is another way for the museums to present a unified coordinated picture of the Flechtheim losses which will pre-empt the possibllity of losing the works from the museums.

The heirs are running out of time

Nevertheless, it was launched only recently, and Michael Hulton, according to the museums' great Flechtheim project, would attend the press conference and maybe even say a few words. In fact, that's not true, says attorney Markus Stötzel. The desire to continue the stalled talks in Munich and Dusseldorf was ignored. The museums operated there instead a policy of blocking the heirs, justified by excuses with the flat, indifferent reference to "further research" and tried to rewrite the history to a more agreeable end.  "The exhibition organizers cannot seriously expect the participation of a representative of the Flechtheim estate at the opening of the project given their ignorance of the legitimate desire of the two claimants for a solution to the cases which have been pending for years."

Michael Hulton still wanted to come on Wednesday and also speak with journalists, but not at the press conference of the fifteen museums in Dusseldorf. There, in Dusseldorf, Marion Ackermann, Director of the Art Collection NRW, announced last November the need for time for more research on the issue of Flechtheim paintings in her museum but said that could not indefinitely expand given the age of the Flechtheim heirs: "Sometime we must come to a decision, even if we could not figure out all the details."
The art dealer Flechtheim (1878-1937)

National Socialism ended the career of Alfred Flechtheim, who was one of the main promoters of avant-garde art in Germany. As a gallery, he represented, among others Pablo Picasso, Max Beckmann, Paul Klee, Max Ernst and Marie Laurencin. In 1913, he opened his first gallery in Dusseldorf on Königsallee. He collected art and worked as a journalist and publisher; in1921 he founded the legendary magazine 'Der Querschnitt'.

Born in 1878 as the son of a Jewish merchant family in Munster, Flechtheim was already exposed in the Weimar Republic to anti-Semitic hostility. After the takeover of power by the Nazis, he lost his fortune, his private and gallery collections. They were scattered all over the world. Flechtheim died impoverished in 1937 in exile in London after emergency surgery. His wife Betty took her own life in Berlin in 1941 in fear of deportation.