Over the last decade, Austria has made significant progress in restoring art and property looted by the Nazis during World War II. Now the government’s commitment to that goal is facing a new test, with the filing of a claim on Tuesday for the return of one of the nation’s most celebrated artworks: the “Beethoven Frieze,” by Gustav Klimt. 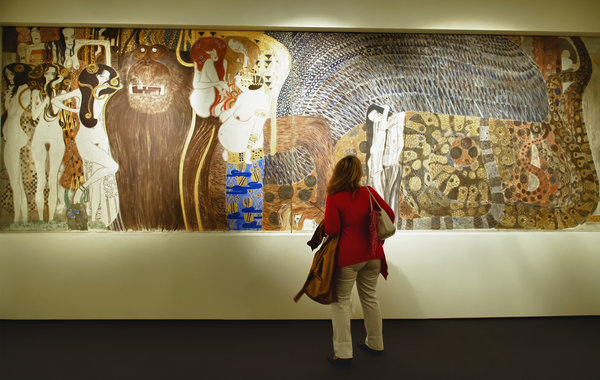 The “Beethoven Frieze” (1902), by Gustav Klimt, on view in Venice last year while on loan for an exhibition devoted to the artist.

This monumental 1902 work, which stands seven feet high, spans more than 112 feet and weighs four tons, is so well known that an image from the frieze was selected as the motif for a commemorative Austrian 100-euro coin. The work, part of a homage to the composer’s Ninth Symphony, is housed in the gold-domed 1902 Secession building in Vienna, where a climate-controlled room has been specially constructed for it.

The current dispute over the “Beethoven Frieze” does not hinge on wartime plundering, but rather on how stolen art was handled after the war ended, a common theme of restitution cases arising from Nazi looting.

The gold-painted frieze was owned by the Lederer family, wealthy Austrian Jews who were important patrons of Klimt’s. When the Nazis invaded Austria in 1938, the family escaped to Switzerland, but its extensive art collection was seized and its once formidable industrial empire bankrupted. Many of the family’s valuable works, including 18 Klimts, were destroyed in the final days of the war.

The mammoth frieze survived and was formally returned to Erich Lederer, the family heir, after the war. But there was a hitch. The Austrian government would grant him export licenses for his other artworks only if he sold the “Beethoven Frieze” to the state at a cut-rate price, Mr. Lederer’s heirs say.

In a 1972 letter to Bruno Kreisky, then the Austrian chancellor, Mr. Lederer complained about what he considered government extortion, writing that officials were “trying to force me to my knees” and thinking “why won’t he finally die, this LEDERER!”

Mr. Lederer finally agreed to sell the frieze to the government in 1973 for $750,000: half of its estimated worth at the time, according to an evaluation by Christie’s. Since 1986, it has been on view at the turn-of-the-century Secession gallery, where it was first shown at a 1902 exhibition named after Klimt’s breakthrough art movement.

Georg Graf, a law professor and restitution expert at the University of Salzburg, who is supporting the family’s claim, said, “While the Austrian Republic did formally return the artwork after the war, it ultimately forced Erich Lederer to sell it back in old age by upholding the export ban.”

In 2009, the Austrian government amended its restitution law to apply to property that was sold at a discount because of that ban.

It is under this law that the Lederer family filed its claim on Tuesday to the government’s Art Restitution Advisory Board. This panel will, in turn, make a recommendation about the “Beethoven Frieze” to the Austrian minister for education, the arts and culture, Claudia Schmied, who is to make the final decision. Dr. Schmied did not immediately respond to an e-mail and telephone call seeking comment.

After the war, several European countries retained custody of treasures that had been looted from private families who subsequently tried to regain possession of their works. The heirs of Baron Mor Lipot Herzog, for example, the owner of one of the largest private collections in Europe before World War II, are pressing the governments of Hungary and Poland to return some of the family’s lost art.

Over the past 15 years, the Austrian government has taken steps to compensate families victimized by the Nazis. In 1999, lawyers say, it returned six Egon Schieles to Erich Lederer’s heirs, as well as a painting by Gentile Bellini that it had compelled Mr. Lederer to donate in exchange for lifting the export ban on other works he owned.

Marc Weber, the Lederer family’s lawyer, said that while a few other claims had been filed under the 2009 law, the “Beethoven Frieze” is by far the most valuable and significant item to come before the commission. “The frieze is the best example to see if the law is working,” he said.