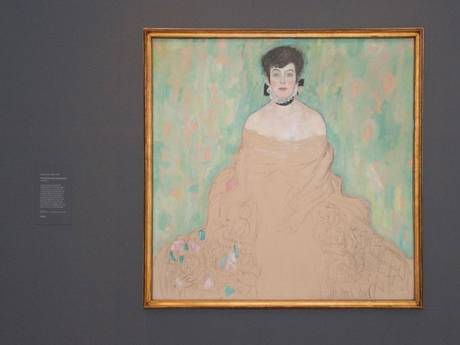 An unfinished portrait by Gustav Klimt used as the centrepiece of the National Gallery's major new exhibition is loot stolen by the Nazis, according to a leading expert. The painting of Amalie Zuckerkandl, which the Austrian was working on when he died in 1918, is the centrepiece of the museum's show Facing the Modern: The Portrait in Vienna in 1900, which runs until January. It is on loan from the Belvedere Gallery in﻿ Vienna, which received it as a gift from a private collector.

E Randol Schoenberg is a Los Angeles-based lawyer who specialises in the restitution of significant artwork and has won a number of high-profile cases relating to the recovery of stolen art, particularly during the Holocaust. He outlined his concerns about the Zuckerkandl painting last week.

"Gustav Klimt's beautiful unfinished portrait of Amalie Zuckerkandl, herself a Nazi victim, was owned by Amalie's friend, the Jewish sugar baron Ferdinand Bloch-Bauer. In 1938, Ferdinand was forced to flee Austria, and survived the war in Zurich. He died in 1945. As he explained in his will, his 'entire property in Vienna [had been] confiscated and sold off'. His heirs never found the portrait."

Mr Schoenberg said the painting was still at Bloch-Bauer's home nine months after he fled, and that a Nazi inventory in 1939 listed the work. Dr Erich Führer, a lawyer and high-ranking SS officer, was initially hired by Bloch-Bauer to protect his property, but ultimately became the liquidator. According to Mr Schoenberg, he kept 12 of Bloch-Bauer's paintings, including a Klimt, for himself. Mr Schoenberg said: "No one knows exactly what Dr Führer did with the portrait, but Amalie's son-in-law supposedly came into possession of it during the war and sold it to the art dealer Vita Künstler. Vita held on to the painting for many years, donating it to the Austrian gallery when she died in 2001."

In 2006, an arbitration panel granted ownership of the Zuckerkandl portrait to the state, but a dispute over the decision continues.

In the same year, Mr Schoenberg successfully represented 90-year-old Maria Altmann in her effort to win back five stolen Klimt paintings from the state of Austria that had been seized by the Nazis, including his famous gold portrait of Bloch-Bauer's wife and Maria's aunt, Adele. It sold for $135m (£83.54m) later that year, with Mr Schoenberg reportedly earning $120m after the paintings were sold, having acted on a "no win, no fee" basis.

Mr Schoenberg concluded on his blog: "The portrait of Amalie is a Nazi-looted painting, wrongly withheld by the arbitration panel. Under Austrian law, as it is currently being interpreted, the painting would be returned to Ferdinand's heirs.

"Perhaps before the National Gallery returns the painting to the Austrian gallery, it should request a new determination by the Austrian art restitution advisory board. That way, this misappropriated painting can finally be returned."

A spokeswoman for the National Gallery said it had "both legal and ethical obligations to ensure a work can be borrowed for an exhibition" as well as international agreements with which it has to comply. She said: "Klimt's Portrait of Amalie Zuckerkandl is among those paintings in Facing the Modern ﻿for which the Government offers immunity from seizure. Therefore, the National Gallery has been obliged to investigate the history of these paintings."