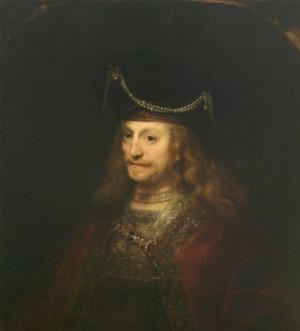 Ferdinand Bol’s Portrait of a Man, around 1642

A painting sold to stave off Nazi persecution and now restituted to the heirs of a Jewish art dealer is being auctioned to raise funds to continue the family’s fight for 188 other works of art.

Ferdinand Bol’s Portrait of a Man, around 1642, was restituted by the Netherlands to the heirs of the Dutch art dealers Nathan and Benjamin Katz in 2012. It will be auctioned at Christie’s New York on 29 January. The painting was acquired for Hitler’s planned museum in Linz, and was returned to the Dutch government after World War II. It is estimated at $1.8m to $2.2m.

The Katz family survived German occupation of the Netherlands “by using art transactions [with the Nazis] to hold off putting them into camps,” says the heirs’ lawyer Thomas Kline.

The Bol portrait was sold to Hitler’s art buyer Hans Posse in 1941 in exchange for the family’s “temporary protection from anti-Jewish measures,” said the Dutch Restitutions Committee in its recommendation urging the return of the Bol—an emigration ban was imminent and mass deportations of Jews were taking place across Central Europe. Posse acquired scores of works from the Katzes. The brothers also had dealings with Hermann Goering, who bought 14 works from them.

The art-for-lives drama continued in 1942, when Nathan Katz escaped to Switzerland. From there, said the Committee, he traded a Rembrandt portrait for 25 visas allowing Benjamin and other family members to emigrate to Spain. The Rembrandt was evidently so coveted that Nazi officials accompanied the family on the train to ensure their safe arrival, fearing that otherwise Nathan would not release the painting. (The Rembrandt was returned to the Katzes around 1946.)

With the Bol’s restitution, the Dutch government “now recognizes that Nathan and Benjamin Katz were persecuted and forced, at least in part, to do business with the Nazis,” says Nathan’s granddaughter Lauren Gladstone.

The Committee, however, rejected the heirs’ claims to 188 other works, saying it was not clear whether it was “highly probable” that the sales were forced, or that the brothers were owners of the works rather than intermediaries. “The standard for individuals is different from the art trade,” says the Committee’s director Evelien Campfens. “For Jewish individuals it is assumed that if they owned the work, [the sale] was involuntary during the Nazi era.”

The heirs are seeking to have the decision reconsidered and are also applying for three other works returned to the Netherlands by Germany in 2012. “The family has financed the effort up to now,” says their lawyer Kline. “Funds from the sale will be used to continue the recovery effort.”