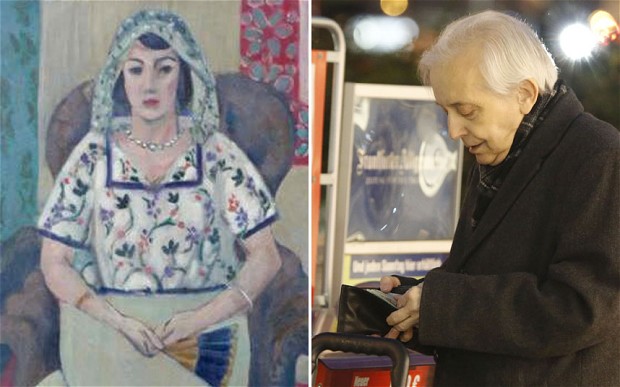 The catalyst for this new campaign was the revelation last month that Bavaria had kept secret for some 20 months the discovery of 1,400 artworks in the apartment of Cornelius Gurlitt, right, an elderly Munich recluse whose father was a Nazi-authorised art dealer. Photo: Paris Match/Best Image/Vantage News

Heirs of Jewish victims of the Nazis have new hope that lost family artworks will be returned following signals that Angela Merkel, the German chancellor, is considering an overhaul the country's much-criticised art restitution policy.

US and Israeli officials and prominent Jewish leaders have launched a new diplomatic push to pressure Germany and its museums to speed up and bring transparency to the often slow and opaque process.

Ronald Lauder, the cosmetics billionaire who heads the World Jewish Congress, said this month that he will lobby Berlin to form an international committee of independent art experts to trawl through German museums for possible Nazi cultural loot.

"More than 20 million artworks were stolen during the war and many of them are still hanging in German museums," said Mr Lauder.

"We have not seen the will of the government to comb through its own collections."

The onus is currently on Jewish heirs to track down artworks in museums, galleries and private collections that they believe were looted and prove that they were seized or sold cheaply under duress.

Mel Urbach, a New York lawyer and restitution expert who represents the British heirs of a prominent Jewish art dealer, said that he believes that Monika Grütters, the new German culture minister sworn in last week, would support a new approach.

"We understand that she is quiet favourably disposed to our position on this issue, as is Mrs Merkel," he said. "German institutions have tended to be rather adversarial on this, but we are hearing that that might change."

The catalyst for this new campaign was the revelation last month that Bavaria had kept secret for some 20 months the discovery of 1,400 artworks in the apartment of Cornelius Gurlitt, an elderly Munich recluse whose father was a Nazi-authorised art dealer.

Even though Germany signed up to the international 1998 Washington accords on the return of Nazi plunder, it has since emerged that Mr Gurlitt may be entitled to keep most of the paintings, in part because the country's statute of limitations has passed for individual claims.

But in another sign of shifting mod in Germany, the new Bavarian justice minister said he is drafting legislation to lift that statute of limitations in such cases.

Winfried Bausbeck also criticised the slow progress assessing the provenance of the artworks. "There is no doubt that everyone involved on the federal and state level should have tackled this challenge with more urgency and resources right from the start," he told Spiegel magazine.

Douglas Davidson, the State Department's envoy on Holocaust issues, has visited Berlin twice in the last month in an effort to encourage German authorities to implement the spirit and not just the letter of the 1998 protocols.

"The Germans have an admirable record on confronting their past under the Nazis with Holocaust education, monuments and museums," Stuart Eizenstat, an architect of the 1998 accords and special adviser to the US secretary of state, John Kerry, told the Telegraph.

"We don't want art restitution to be an exception. The momentum after the Washington Principles in 1998 has slowed down and there is a troubling lack of transparency and speed."

The paintings have emerged as a key flashpoint amid mounting international criticism of Germany's handling of claims by heirs of Jewish families whose art was looted by the Nazis.

What is not in dispute is that they were once the property of Alfred Flechtheim, a noted German-Jewish art collector and dealer who fled Adolf Hitler's thugs and died in near-penury in exile in London in 1937.

Michael Hulton, a British doctor who is Mr Flechtheim's great-nephew, and his lawyers argue that they have a compelling case that the paintings were seized in 1934 during Nazi rule.

Under the Washington accords, they should therefore be returned to the Flechtheim estate, of which Mr Hulton and his elderly British step-mother are the only heirs.

The Pinakothek contends that the paintings were sold by Mr Flechtheim in 1932 and therefore are not covered by a restitution claim. Remarkably, they have insisted the Mr Hulton, a San Francisco-based anaesthetist, provide paperwork to prove that his great-uncle's works were lost under the dictatorship that he had already fled.

This dispute would seem an obvious subject for mediation by the Limbach commission, the independent German panel established to adjudicate just stand-offs.

But unlike in neighbouring Austria, both sides have to agree to accept mediation. The result is that in the eight years since it was set up, just seven cases have been concluded, far fewer than the 300 restitution cases that have been handled since 1998 in Austria.

And the cultural fathers of the Pinakothek made abruptly clear to the Telegraph that they have no intention of agreeing to mediation.

The Bavarian state art collection "completely and utterly reject all allegations" by lawyers representing the Flechtheim heirs, said Prof Klaus Schrenk, the director-general. He insisted, without providing evidence, that the agency had investigated the provenance of the paintings and concluded they were sold in 1932.

"Accordingly, there is no causal connection with the persecution of Alfred Flechtheim by the Nazis," he said. "The allegations made by [Mr Hulton's lawyers] are completely unfounded."

That brusque response infuriated Mr Hulton's lawyer. "This is a self serving declaration and is nothing more than wishful thinking," said Mr Urbach. "The reality is that a sale did not take place. The paintings were stolen by the Nazis, but how are we supposed to prove that?"

In an interview, Mr Hulton, 67, described his frustrations at dealing with German bureaucracy in an effort to win belated justice for his family.

"We are up against entrenched interests who are just not willing to budge," he said."If they think they have such a strong case, I do not understand why they are not willing to go to arbitration.

"But the fact is that if we could go to the Limbach commission, I have absolutely no doubt the Beckmann paintings would be returned to us. And that's why they won't take up our offer.

"The Germans really have done so much to deal with the legacy of the Holocaust, but now they are just shooting themselves in the foot. Their refusal to accept mediation makes a mockery of the whole system.

"Alfred Flechtheim was cheated of his property by the Nazis and now my family is being cheated of our legacy."