You can never be too careful. Thanks to the watchful eye of a museum curator in Indiana, the information in the Jeu de Paume database concerning the thefts in 1941 of Raoul Meyer’s collection from a safe in Mont-de-Marsan required a serious overhaul. The painting entered the Jeu de Paume on February 2, 1941.  The most egregious mistake was to have indicated as restituted a painting by Claude Pissarro, “La Bergère,” a small work which, as it turns out, hangs currently in the Fred Jones Museum of Norman, Oklahoma. There is no evidence that the painting was ever returned to Raoul Meyer as of 1947. The subject of one of numerous exchanges engineered by the likes of Gustav Rochlitz, the painting most likely ended up on the private art market in Switzerland from which it wended its way to the United States.  In fact, thanks to Swiss Federal documents, additional light can be shed on the fate of Meyer 13, or "La bergère rentrant ses moutons," by Claude Pissarro. 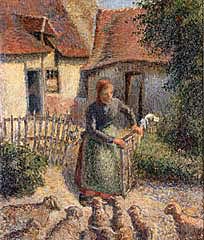 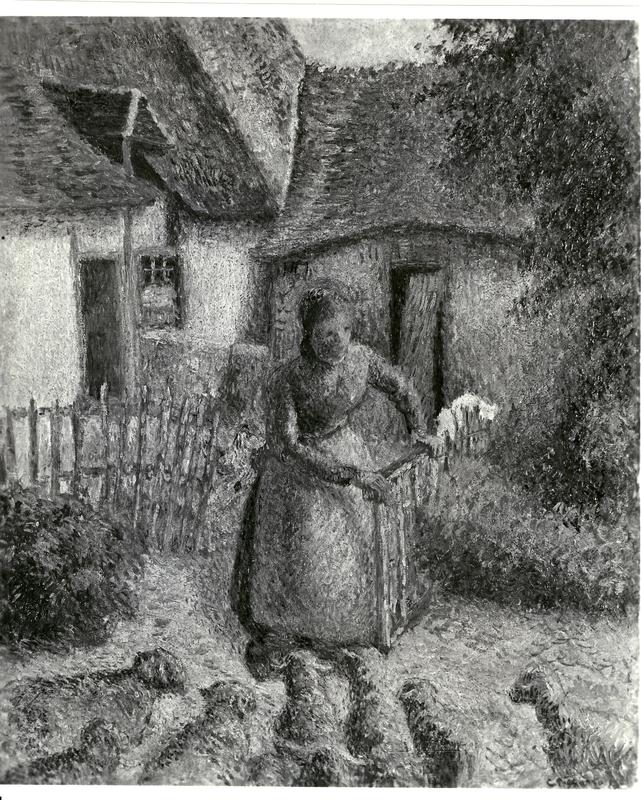 Indeed, in a confidential report filed on March 6, 1998, by Pablo Crivelli of the Independent Committee of Experts on Switzerland during the Second World War (Commission indépendante d’experts: Suisse-Deuxième Guerre Mondiale), Crivelli details the difficulties in reconciling the evidence of plunder aimed at the Pissarro painting stolen from Raoul Meyer and the sparse documentation in the  possession of the Swiss Compensation Office (Office Suisse de Compensation) at the time that the loss was declared to the Swiss government.

Unbeknownst to Raoul Meyer and his lawyers, the Swiss Compensation Office (SCO) receives a tip that a man named Léon de Sépibus, who already enjoyed an unsavory reputation among Swiss commercial circles, had imported two paintings into Switzerland in late 1945, one of which was the Pissarro.  The SCO wrote several letters to de Sépibus asking him for information about the paintings and official documentation regarding their origin.  According to SCO officials, de Sépibus panicked, replied that he had re-exported the paintings to the United States shortly after their arrival in Switzerland.  Nevertheless, SCO staffers had recorded the two paintings imported by de Sépibus as worthy of additional inquiry.

It was not until spring of 1947 that the French Embassy in Bern began circulating to dozens of Swiss entities the French government's official listing of works and objects of art looted during the period of German occupation of France, also known as the "Répertoire des Biens Spoliés." Hence, in theory, the SCO could not have known prior to spring of 1947 that the Pissarro in the hands of de Sépibus might have been the Meyer painting stolen in France in early 1941.

The entire case burst forth into the open when Raoul Meyer files two lawsuits in 1952, one against de Sépibus and the other against a Swiss art dealer, Cristoph Bernoulli, who is identified as the current owner of the Pissarro painting.   The case dragged on well into 1953, where the SCO denied knowing anything of the looted nature of the painting, while Bernoulli argued his good faith regarding the Meyer painting.  It transpires that no one had questioned de Sépibus about discrepancies in his story as well as contacting the French Embassy in Bern in 1946 about the possible looted origin of the Pissarro in the hands of de Sépibus.

One way or another, the Swiss experts were not given access to the court records pertaining to the separate Raoul Meyer proceedings against Bernoulli and de Sépibus.  Hence, the shroud of uncertainty continues to hover over this small painting currently on display at the Fred Jones Museum in Norman, OK.
The correction to the Pissarro Meyer have required a complete review of this small but important collection of modernist works held by a man who co-owned with Max Heilbronn, another victim of the ERR’s plundering units, the famed ‘Galeries Lafayette’ department store on the right bank of Paris.

The Meyer case becomes more complicated due to a single work—a painting by Amédéo Modigliani entitled ‘La Porteuse de pain’. It shows up on several lists referred to as the ‘collection of Raoul Meyer’ dated April 1945 which serve as reference for the French restitution authorities at the Commission de recuperation artistique (CRA). There is no correspondence, there are no signatures, hence it is unclear who compiled the list.

The Jeu de Paume database identifies a painting as ‘Frau mit Brot’ with the designator Meyer 9. The ERR inventory does not assign an artist to that painting. However, a handwritten note most likely placed by postwar German authorities ascribes the painting to Modigliani. Thus, one can surmise that this addition to the ERR inventory can be explained by the fact that the Raoul Meyer list was sent to the German restitution authorities.

Here’s the problem. The image linked in the Jeu de Paume database to the alleged Modigliani is not a painting by Modigliani, but it is by Chaim Soutine. It is a sister painting to his famous “Servante en bleu” which he painted in 1934. A quick check of the Soutine catalogue raisonné does not disclose the existence of the painting mis-attributed to Modigliani. The photo comes from the Koblenz archives in Germany and is tagged as Meyer 9. It would be easy to blame an archivist for not knowing the difference between a Soutine and a Modigliani, like apples and oranges. But to see the error reproduced on a quasi-official inventory of the Raoul Meyer collection is perplexing at best.

Thus, we are left wondering whether the alleged Modigliani which is in reality a Soutine is truly a painting that belongs to Raoul Meyer. If it is, let’s suppose for one nanosecond that he did own a Modigliani, did Modigliani paint a woman holding a loaf of bread? If anyone out there is a Modigliani expert, please express yourself. This is the time to do it!