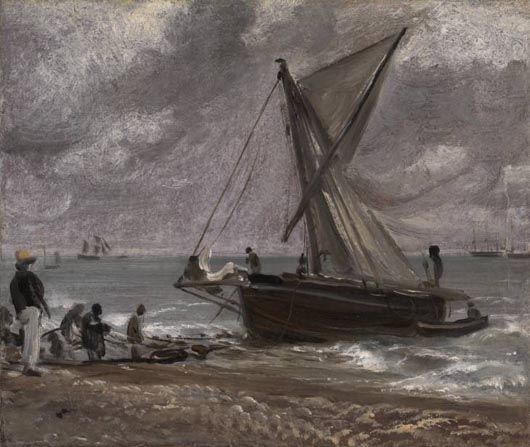 The Tate has been ordered to return a valuable Constable painting and criticised for failing to adequately research its background after it emerged the work was looted during the Second World War.

The Spoliation Advisory Panel, set up to scrutinise claims over works in public collections that were potentially looted during the Nazi era, released a report recommending the gallery return the painting Beaching a Boat, Brighton.

In the 22-page report, it said the Tate was under “a moral obligation to pursue the possibility that the painting had been the object of spoliation during the war”. The gallery now plans to return the work – donated to the collection more than a quarter of a century ago – following a trustee meeting later this spring.

The panel, chaired by Sir Donnel Deeny, said the gallery’s experts could have consulted several sources to establish the likelihood that the painting had been looted during the war. “It would not have been difficult to have made enquiries of the Hungarian government, who had included the painting on its official list of looted art from the late 1940s,” it added.

The collector was revealed by The Art Newspaper as Baron Ferenc Hatvany, who deposited the painting in a Budapest bank vault when the Nazis invaded Hungary in 1944, and he fled to the countryside.

Hatvany, a Jew who died in 1958, had put the painting into the vault under a different name and title. He had bought it in at a Paris auction in 1908.

When Soviet forces marched into Hungary in 1945 they looted the bank vaults and carried away numerous paintings, including two of those owned by Baron Hatvany. He returned to the bank a month later to find his properties and vaults nearly empty.

The panel believes the painting had already been looted by the Germans, which was how it ended up for sale in the West rather than in the Soviet Union. The Hungarian government then listed it on its register of looted artwork. Hatvany’s heirs discovered the work was in the Tate’s collection two years ago and submitted a claim in April last year.

The Tate released a statement saying that in light of the findings it would “recommend to its trustees, when they next meet in May, that the work be returned to the claimants”.

The claimants wished to remain anonymous and the report did not name the Baron himself, describing him as a “well-known Hungarian artist and connoisseur, whose family had amassed considerable wealth through banking and industrial activities”.

The gallery pointed out in its submissions to the panel that the provenance had been overlooked by two selling galleries, a Yale University Press catalogue and four institutions to which the painting was lent. The gallery added it was “grateful for the care with which the panel has examined the evidence and is pleased to follow the conclusions of the report”.

The painting was donated to the Tate by PM Rainsford, who had bought it in 1962. It was recorded as being sold by a Mr Meyer to the Leger Galleries in London in January that year. From there it was bought by the Broadway Art Gallery in Worcestershire where it passed to Ms Rainsford. The report said there was no evidence to suggest any of these owners were not bona fide purchasers of the painting.