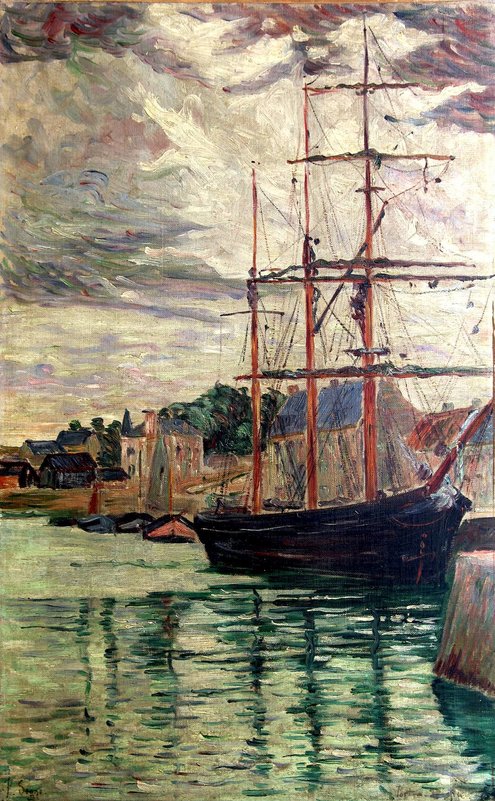 This 1883 seascape by Paul Signac was given to the Vienna Philharmonic by a German Nazi official.

It is a simple oil painting, showing a sailing ship moored in a harbor, an early work by the French artist Paul Signac, made in 1883. For decades it lay hidden away in a storage space of the august Vienna Philharmonic, a 172-year-old institution that is one of the cultural pillars of Europe.

Now that painting has come back to light, the latest example of the orchestra’s long struggle to rid itself of the taint of its activities during the Nazi era, when it purged Jewish members and served the regime as a vehicle for propaganda and entertainment. The work, “Port-en-Bessin,” was stolen by a German military official from a figure in the French Resistance at the outset of the war and bestowed on the orchestra in thanks for performances for German soldiers in France in 1940, Philharmonic officials said in interviews this week. And after 74 years, the orchestra has tracked down its owner’s heirs, sending out letters notifying them on Thursday.

“We finally found one of the best experts on the planet,” Clemens Hellsberg, president of the Philharmonic, said of Sophie Lillie, the art historian brought into the search last year. “We are thrilled that this property from Vienna will be transferred to France and to the right persons. It was always a knowledge and a responsibility. It was really a moral problem.”

The orchestra, which was just awarded the $1 million Birgit Nilsson Prize this week for its long history of musical excellence, has drawn praise for its efforts of recent decades to illuminate that dark period in its illustrious history. Even so, a fuller accounting of its wartime activities and Nazi sympathies that lasted decades only emerged last year after a public outcry pushed the Philharmonic to open its archives to outside historians. That was also when the orchestra hired Ms. Lillie to search for the Signac’s rightful owner.

“It’s always the same story,” said Marc Masurovsky, the founder of the Holocaust Art Restitution Project. “ ‘We didn’t know. We didn’t know where to look. What to do?’ How many times do intelligent people have to act like simpletons, especially in a country like Austria, where so much loot from France was laundered and which produced so many agents of cultural plunder?”