Cassirer Heirs’ Claims to Pissarro Work Revived by Appeals Court, the Year 2013 Shows that the Tide for Restitution May be Shifting Again

The U.S. Court of Appeals for the 9th Circuit restored last week claims by heirs of Lilly Cassirer against the Thyssen-Bornemisza Collection for the return of the Camille Pissarro painting Rue St. Honoré, après-midi, êffet de pluie. 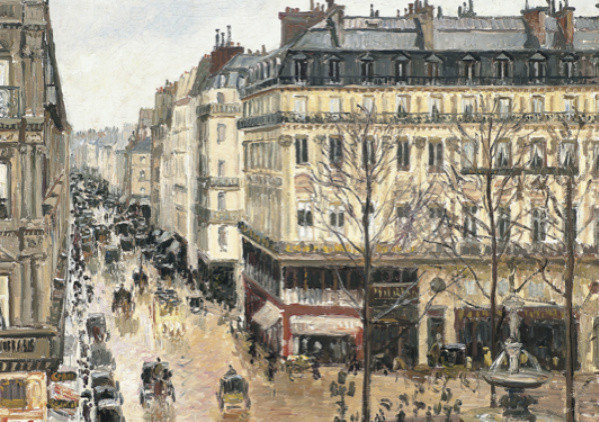 The Cassirers claim that the painting was expropriated from Lilly when she fled Nazi Germany in 1939 in exchange or a nominal price, while the museum argues that it has good title to the work.  As the prospect of claims related to the Gurlitt collection in Munich continue to swirl, and as frustration over the Gurlitt affair continues to mount, the Cassirer decision is an important one particularly in that it could signal a shift in momentum in WWII restitution claims, after several years of sweeping defeats for claimants.  As a significant year in restitution claims draws to a close, another case to be argued next week could portend how 2014 will look.

California’s Revisions to Its Statute of Limitations, Cassirer, and Von Saher

The Cassirer case’s procedural history is a complicated one, and has parallels to the Von Saher v. Norton Simon Museum case also on appeal (brought by Jacques Goudstikker heir Marei von Saher), which was argued the same day as Cassirer but which remains undecided.  The Cassirer plaintiffs are the great-grandchildren of Lilly Cassirer, whose citizenship and property rights were stripped pursuant to the notorious 1935 Nuremberg Laws.  Faced with a coercive offer to “buy” the painting, she relented and left Germany.  The painting was sold by that buyer to an anonymous purchaser in 1943.  After the war, Lilly obtained some compensation from the German courts.  The painting was purchased in 1976 by Baron Hans-Heinrich Thyssen-Bornemisza, who later sold it to the Collection bearing his name, which is in fact an agency of the Kingdom of Spain.  Claude Cassirer (Lilly’s grandson) discovered the whereabouts of the painting in 2000, and filed suit against the Collection and the Kingdom of Spain in U.S. District Court in 2005 by invoking the Foreign Sovereign Immunities Act.

The defendants moved to dismiss under the FSIA (which had just then  been interpreted by the Supreme Court in Altmann v. Republic of Austria to extend to certain wartime takings), but the District Court and the 9th Circuit denied the motions, holding that the FSIA did not require the defendant sovereign actually to have done the taking in violation of international law (since it was the Nazis, not the Spanish, who were accused of the forced sale).  The Supreme Court declined to hear an interlocutory appeal of that decision.

At the time the claim was filed, California Procedural Code of Civil Procedure § 338(c)(3) had recently been amended in 2002 to revise the standard three-year statute of limitations for claims for the taking of property.  Three years is a standard statute of limitations for torts like this.  Namely, California had enacted Code of Civil Procedure § 354.3 to provide that an owner of “Holocaust era artwork” who filed a claim would be considered timely so long as it was filed before December 31, 2010.  That revised statute was struck down by the 9thCircuit in 2010 as preempted by the federal law of wartime restitution in Von Saher v. Norton Simon Museum of Art at Pasadena, 578 F.3d 1016, 1026-30 (2009) (Von Saher I).  In other words, the 9th Circuit found that because federal policy so dominates the field of restitution of property and claims related to wartime, it displaces the states’ authority to make anylaws on that topic by virtue of the Supremacy Clause of the Constitution.

In response to Von Saher I, California amended § 338(c).  In lieu of the old, universally-applicable three year statute of limitations, California enacted a six year statute of limitations, triggered only by the “actual discovery” of the whereabouts of a work of fine art, applicable to all claims then pending or filed before 2017, so long as the artwork had been taken in the 100 years prior.

On remand (Cassirer II), the Cassirer defendants again moved to dismiss, shortly after the Norton Simon had successfully argued in District Court (also on remand to consider whether Von Saher’s claims were timely under the old three-year statute of limitations) that the newer, six-year statute was still an impermissible intrusion on foreign affairs.  After Von Saher’s claim was dismissed in early 2012 (Von Saher II), the Thyssen-Bornemisza Collection cited that decision as a basis to dismiss the Cassirer claims, and the District Court agreed.  Interestingly, the 9th Circuit has still not issued an opinion in Von Saher II, argued on the same day in August as Cassirer II.

The 9th Circuit panel of Harry Pregerson (who was quite critical of the defendants in the Von Saher oral argument), Dorothy Nelson, and Kim McLane Wardlaw, has now reversed the District Court and sent the Cassirers’ claim back for litigation.  Reviewing the standards of “field preemption,” or when “a state law has no serious claim to be addressing a traditional state responsibility and (2) intrudes on the federal government’s foreign affairs power,” the Appeals Court held that the revised statute did not create an independent remedy for wartime injuries of the sort that would intrude on the federal government’s authority in that area, nor was it “functionally equivalent” to the § 354.3 that was struck down in Von Saher I.

First, the court noted that the extension of limitations for artworks was unrelated to wartime claims on its face.  It applies equally to artworks taken under far more mundane circumstances.  Indeed, the law is silent on matters of foreign affairs.  Critically (see more below), the court rejected the idea that allowing the claim to proceed was necessarily an adjudication of the fairness of what Lilly had been paid by Germany, citing the important decision concerning the Hans Sachs painting collection.  In that case, the high German commercial court (Bundesgerichtshof) restituted a collection to the heirs of Hans Sachs from the Deutches Historisches Museum, notwithstanding the compensation paid to Sachs after the war.  Had the newer California statute provided a method to attack those German payments collaterally, it might well have intruded on the foreign affairs function, but this law does not, said the court.

Second, the court gave short shrift to the argument that the six-year limitations law was functionally equivalent to the one already struck down.  The latter addressed Holocaust claims specifically, while the former is silent, as noted above.

The 9th Circuit did leave open an important question: whether the enactment of revised § 338 violates the defendants’ due process rights.  That is, did the law strip the museums of a vested property right without due process?  The 14th Amendment gurantees that a state may not simply pass a law to deprive someone of a property interest without compensation, which reviving a statute of limitations could in theory have the effect of doing.  Too many factual issues exist, the court held, to determine conclusively on the pleadings whether the museums had such a vested right.

Cassirer II’s Impact on Claims and the Gurlitt Affair

As the world ponders what will become of claims to the Gurlitt find, 2013 could turn out to have been a momentous year.  Just last year, the tide seemed to have turned against restitution claimants for good.  The simple fact of the passage of time had made it difficult, if not impossible, for claimants to avoid three year statutes of limitations, even when allowed into federal court after Altmann.  The Museum of Fine Arts, Boston’s victory against Claudia Seger-Thomschitz, Seger-Thomschitz’s losses in the 5th Circuit, and the 2012 decisions inVon Saher and Cassirer themselves seem to portend that even with arguments to stretch the statute of limitations past the war itself, there was simply too much to overcome for heirs to whom some actual or constructive awareness of the paintings’ whereabouts could be found in a 60-year historical record.

Things changed quite a bit in 2013, and momentum seems to be gathering for theories beyond the straightforward narrative of wartime theft, now with added layers of post-war commercial interaction.  In April, the Herzog heirs’ claims were reinstated against the Hungarian state museums on the grounds that de Csepel and his co-plaintiffs had sufficiently alleged a bailment relationship, on which the statute of limitations would not begin to run until demand was made for the paintings’ return (which had happened only recently).  Now, the widely-cited foreign affairs preemption defense has been undermined by Cassirer II, at least for the moment.  And on December 23, 2013, the District Court for the Southern District of New York will hear argument on a motion to dismiss in Schoeps v. Freistaat Bayern et al., a case that seeks the return of Madame Soler by Pablo Picasso in the Pinakothek der Moderne in Munich.  Schoeps argues that Germany is amenable to suit not as the sovereign under which the Nazis operated, but as a commercial actor that purchasedMadame Soler in New York later on.  The question of whether the claim requires adjudication of the adequacy of post-war payments by Germany, and thus puts the claims in the field of preemption, is squarely at issue, and Cassirer II certainly lends strength to the plaintiffs.

2014 should bring still more developments in a topic that nearly 70 years after then end of the war, and nearly 20 years of renewed attention, still holds surprises at nearly every turn.