Museums in Bamberg and Karlsruhe Recognize a Sale Under Duress For What it Was, Seek to Do Right Thing

Restitution policy at the federal and state level in Germany in recent months seems to have taken a certain direction that has been cause for criticism.  Whether it is the recent decisions by the Limbach Commission that ignore longstanding law about sales under duress, the odd decision by the Federal Republic of Germany to resist a lawsuit over the Max Liebermann painting found in Cornelius Gurlitt’s apartment that the Gurlitt Task Force has already recommended be restituted, or the resistance to the claims by the Mendelssohn-Bartholdy heirs to Picasso’s Madame Soler, the trend has been towards obstruction and resistance rather than transparency and reconciliation.  Notwithstanding the recent announcement of the Center for Cultural Property losses (the Deutsches Zentrum für Kulturgutverluste about which the jury is still out), this is cause for concern.

This week, there is happier news at the local level.  Two museums have, of their own initiative, stepped up to recognize and address looted art.  The first is in Bamberg in Upper Franconia, an ancient Roman city, one-time center of the Holy Roman Empire, and today a UNESCO World Heritage site.  The so-called Schönborn Lion Cup (Schönborn’sche Löwenpokal) was a victory trophy at the Bamberg Free and Knightly Art of Shooting (Freien Kunst- und Ritterschießen) in 1712. 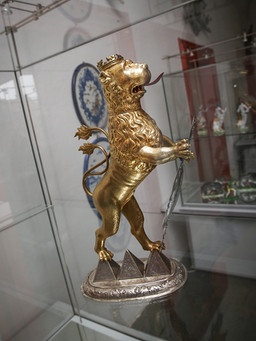 Lothar Franz von Schönborn—Prince-Elector of Mainz, and Elector-Bishop of Bamberg, in personal union, commissioned the cup to depict the heraldry of his family (a lion).  Many years later, two Jewish collectors, Heinrich and Emma Budge, acquired the cup.  After recent research, however, it was discovered that the cup had been sold at auction on May 4, 1937 for a price far below its value.  This combination of Jewish collectors, a sale in the late 1930s in Germany, and an obviously low price, can support only one conclusion: a sale under duress.  The museum, it seems, did not need to be told that, but instead it took action of its own initiative, and reached out to the heirs.  Commendably, they reached an agreement by which the museum legitimized its acquisition.  The cup will now remain in the city museum, legitimately.

Similarly, but still in progress, the Badische Landesmuseum in Karlsruhe announced last week that it had identified six paintings and a late Gothic sculpture that had been looted and that have been in the museum’s collection for more than 70 years.  Provenance researcher Katharina Siefert discovered that the paintings had belonged to a Jewish collection in Mannheim.  Siefert uncovered a listing of objects of “non-Aryan ownership” on a receipt from 1943.  Then-Director of the Karlsruhe Kunsthalle, Kurt Martin, as an expert for the Reich Ministry for Art- and Museum Objects (Reichserziehungsministerium für Kunst- und Museumsgut) confirmed the receipt of the objects from Jewish property.  Martin decided whether such objects were to go into the museum or onto the market.  Apparently, in this case, he chose the former.

Armed with this new information, the museum has placed the seven objects on the www.lostart.de database (including Woman in a Theatre Balcony, artist unknown, pictured), and is actively seeking heirs of the original owners.   This too, is commendable.  The challenge will be finding those heirs; it is not clear from the public reports whether the 1943 receipt offered any more information and thus, whether the collectors or any of their heirs survived persecution. 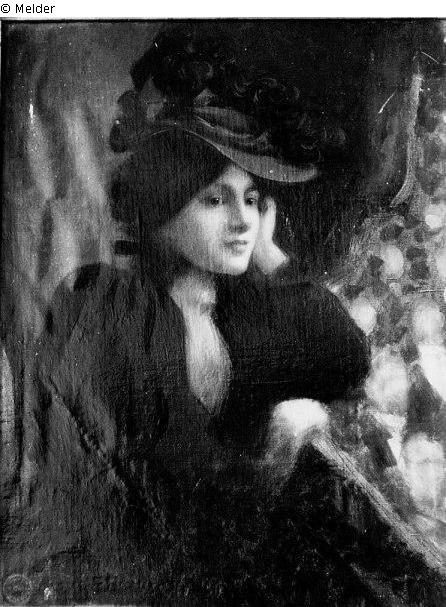 These are only two stories, but they represent the best sort of case study when it comes to looted art.  Namely, they symbolize a recognition of the obvious that is unfortunately far too seldom: no transaction in that time and place involving Jewish owners could be legitimate.  Sometimes the simplest answer is the right one.  If the new national center empowers more museums to be informed and take this path, it will be good news indeed.