Rep. Mike Reynolds called on the American Alliance of Museums to investigate the museum’s accreditation status in light of the recent resignation of the museum’s director.

An Oklahoma lawmaker is asking a national museum accreditation bureau to investigate the University of Oklahoma’s Fred Jones Jr. Museum of Art over a dispute involving a painting that was looted by Nazi troops during World War II. 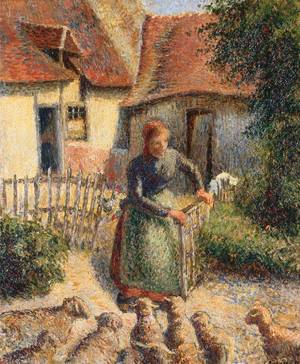 The painting “Shepherdess Bringing In Sheep,” an 1886 work by French impressionist artist Camille Pissarro, has been the focus of a pending lawsuit from a woman in Paris who is seeking to recover the painting from the University of Oklahoma. Speaking at a committee meeting Wednesday, State Rep. Mike Reynolds said there are eight or nine other paintings in the OU collection at the Fred Jones Jr. Museum of Art that have also been identified as possibly stolen or taken in Nazi looting.

In a letter to the organization’s president, Rep. Mike Reynolds called on the American Alliance of Museums to investigate the museum’s accreditation status in light of the recent resignation of the museum’s director.

The university is facing a lawsuit from Leone Meyer, a woman in Paris who is suing the university to recover the painting “Shepherdess Bringing In Sheep.” The 1886 work is by French impressionist artist Camille Pissarro. Meyer alleges the painting was stolen from her father, a Jewish businessman in Paris, during the Nazi occupation of France.

The painting hangs in the Fred Jones Jr. Museum of Art. OU officials have refused to return the work, citing a previous court ruling in Switzerland that denied the family’s claim to the painting based on a technicality. The university doesn’t dispute the fact that the painting was looted from the family during World War II.

In a letter to American Alliance of Museums President Ford Bell, Reynolds said the university violated the organization’s standards for accreditation when it failed to research the painting’s provenance.

Reynolds noted that the museum’s director, Emily Neff, abruptly resigned the day after the Oklahoma House Government Modernization and Accountability committee sent Neff a letter raising concerns about the museum’s handling of the case.

Neff resigned earlier this month after coming to the museum in January, after Meyer’s lawsuit was filed. Reynolds said he thinks her resignation was related to the case.

“I don’t know that it’s the case, but I don’t much believe in coincidences,” he said.

The Oklahoman submitted an open records request for documents related to Neff’s resignation. That request is pending.

Dewey Blanton, a spokesman for the organization, said Bell was unavailable for comment Friday afternoon.

The organization’s standards require museums to “take all reasonable steps” to research the provenance of any art work that may have been unlawfully confiscated by Nazi troops during World War II. If researchers find evidence that an art work was confiscated, museums are required to make the information public and notify anyone who could have a claim to the work.

The museum received the painting in 2000 as a part of a collection left to the museum by Clara Weitzenhoffer, wife of Oklahoma oil man Aaron Weitzenhoffer. At the time, university officials said the gift was one of the most important collections of French impressionist paintings given to an American public university.

Reynolds questioned the OU officials’ decision to defend itself against the suit at taxpayers’ expense, and said he hoped to see the university return the painting.

“It’s an embarrassment to the state of Oklahoma that this painting hasn’t been returned a long time ago,” Reynolds said.

University officials didn’t respond to requests for comment Friday afternoon. But OU President David Boren has said the university has a responsibility to make sure Meyer’s claim is valid.

“The university does not want to keep any items which it does not legitimately own,” Boren said. “However, the challenge to the university, as the current custodian of the painting, is to avoid setting a bad precedent that the university will automatically give away other people’s gifts to us to anyone who claims them.”