‘The Gurlitt collection should be sold to benefit Jewish organisations’

Alfred Weidinger, deputy director of the Belvedere in Vienna, is calling on the Kunstmuseum Bern to make the right choice 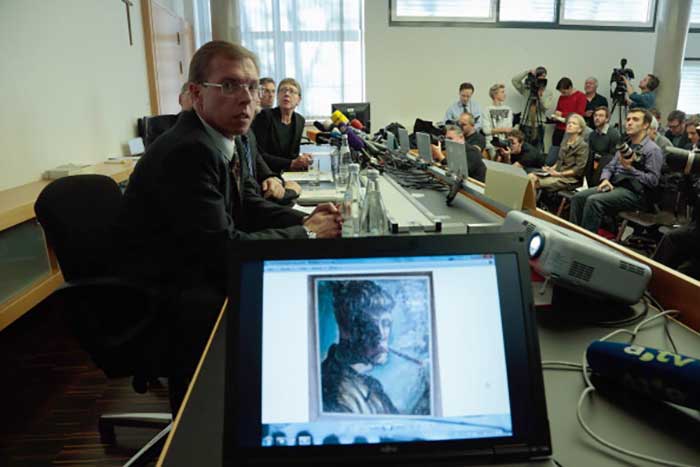 "The Gurlitt collection should not continue to exist, tainted as it is," Weidinger says. Photo: Johannes Simon/Getty Images

On 26 November, the Kunstmuseum Bern will reveal whether it has decided to accept the bequest of the collection of Cornelius Gurlitt, the son of the art dealer Hildebrand Gurlitt. In 2012 German police seized around 1,300 works from Gurlitt’s Munich flat; hundreds of them are thought to have been looted or confiscated from their former owners by the Nazis. On the eve of the Swiss museum’s announcement, we spoke to Alfred Weidinger, the deputy director of the Belvedere in Vienna, which in 2006 returned five major works by Klimt to the heirs of Ferdinand Bloch-Bauer.

Over the years, Weidinger’s research has touched on the activities of the Gurlitt family of art dealers; this, he says, is inevitable—anyone conducting a detailed investigation of art in the Third Reich “cannot avoid the name of Gurlitt”.

The Art Newspaper: When news of the art discovered in Cornelius Gurlitt’s apartment became known last year, you told the Austrian press that this was no surprise; that the existence of the collection was well known and that “every important art dealer in south Germany knew that it existed—and knew the size of it, too”. It was, you said, “ridiculous” to call it a sensation. You also said that any restitution researcher who “worked adequately” could follow the trail left by the Gurlitt family. And finally you said: “Many people haven’t done their homework properly in this case.” Who, for example?

Alfred Weidinger: Germany made the great mistake of storming Gurlitt’s apartment without attempting to reach an agreement with him first, because we all know that this is about private restitution. In a case like this, the only possibility is reaching a settlement by mutual consent. In Germany at the moment, it really doesn’t matter where works turn up, or how tainted the provenance of works hanging in museums is, because there is no art restitution law. This is the major institutional problem: the federal government has more or less assigned art and culture agendas to its constituent Länder and there is no unified stance.

The German federal government and the state of Bavaria did set up an international task force, though, to investigate the provenance of the Gurlitt works.

What a terrible name for it. A task force is an operational organisation created to solve a problem, and working towards a specified end date. But restitution research is an endless task. And those people who are now starting to criticise that commission for working too slowly are very wrong to do so: provenance research on this scale, with more than 1,000 works of art to investigate, requires many people and a great deal of time and money. To say that it should be finished by a specific date is unrealistic; it simply isn’t doable.

Germany is definitely not taking its responsibility seriously: even the task force is just a token gesture. They’re saying: we’ve set up the task force, so we can sit back and relax because we’ve done everything properly.

On the contrary, they have done everything wrong and although they’ve set up the task force, now the pressure is on—this is already becoming apparent also in press coverage. Suddenly everyone’s horrified: why haven’t they finished yet? And the answer is: because they can’t be finished! Because otherwise they would be inaccurate, they wouldn’t research thoroughly, they wouldn’t follow individual trails all the way through, and the results would be inconclusive.

Provenance research is an incredibly long-drawn-out process. Getting hold of the documents is very difficult, and closure is never really achieved because question marks will always remain. That’s the problem with this bequest.

Even though the work of the task force is far from being completed, the Kunstmuseum Bern has an important decision to take. It can refuse the bequest—or accept it and the works will go to the museum.

Accepting the works, hanging them and waiting for claims to come in, would show a brazen disregard: provenance research is something that needs to be undertaken actively. You can’t leave it to the descendants of the victims to make a claim—people who may well not have any idea what their parents or grandparents, who died in concentration camps, might have owned. In other words, active provenance research must be conducted from the museum’s side.

In Austria, art restitution laws have been in place at federal, state and community level since 1998, stating that museums must play an active role in undertaking provenance research. Swiss museums are not required by law to do the same.

They don’t have to do it but if they don’t, their reputation will suffer because the provenance of collections is already an issue today and will become even more problematic in the future. If you are planning to exhibit these works internationally you need to be very certain of their provenance; if Bern accepts these pictures and hangs them in its own museum that’s one thing, but lending them internationally could become awkward.

Resulting perhaps in a succession of lengthy and costly lawsuits?

Possibly, yes, because question marks about the works’ origins provide sufficient grounds for many, many lawyers to offer their services.

So would it be better to decline the bequest, especially as the World Jewish Congress has warned that there could be an avalanche of restitution claims?

I think it is important that someone from the Jewish community made a statement on this issue, that a signal has been sent from a group that represents many Holocaust victims. If a statement comes from Ronald Lauder [president of the World Jewish Congress], then it carries weight. What he’s saying is simple: be sensitive, be careful and please reflect on all the consequences of your decision.

But if Bern renounces the bequest then Cornelius Gurlitt’s heirs come into the picture and the whole issue will fall back into the private sphere again.

This risk must be avoided but even if Kunstmuseum Bern renounces the works, this is still not just Germany’s problem but Switzerland’s too, because Gurlitt’s desire to bequeath his collection to Bern has passed responsibility to the museum. If they had refused the bequest immediately, then they wouldn’t have this responsibility.

Is there a third way for Bern?

Yes, to accept the bequest, not just the best pieces but the entire collection, and, after it has been investigated and restitution claims have been dealt with, to auction it all and to pass on the entire proceeds to a Jewish institution caring for Holocaust victims. In my view that is the only option a museum has if it is operating responsibly.

That would amount to a renunciation of the bequest.

It is a renunciation, because these works are fundamentally tainted. They are linked with the name Gurlitt and that is a problem, a big problem, as you will never have a 100% guarantee that everything is really all right.

With its restitution laws, Austria now has 15 years’ experience in handling these “tainted” works. Many works have been and are still being restored to their rightful owners. If you were to describe what a good restitution law should look like now, what would you recommend to Germany or Switzerland?

That politicians and lawmakers should talk to their Austrian counterparts. Since 1998, Austria has learned a great deal about handling these issues. For all the mistakes and the delays, the victims have been taken into consideration and recovered at least something of what they once owned.

We’re setting an international example: after the many problems and difficulties we had—and a huge number of things went wrong, very wrong, in the past—at some stage someone in Austria had the courage to take responsibility and drafted a restitution law.

In Germany they are clearly trying to sit it out until all the Holocaust victims have died, until no more claims are made, until everything has been forgotten and consigned to the past. The state of Bavaria had a great opportunity for reparation and did not make use of it.

And in my view, it really is the case that Kunstmuseum Bern has already accepted a shared responsibility to deal with this problem; what happens to the bequest is also a moral decision that Switzerland must take. The Gurlitt collection should not continue to exist, tainted as it is.