According to Sam Dubbin, counsel to The Holocaust Survivors Foundation USA, survivors and their families are outraged over the possibility of the art winding up in Switzerland. 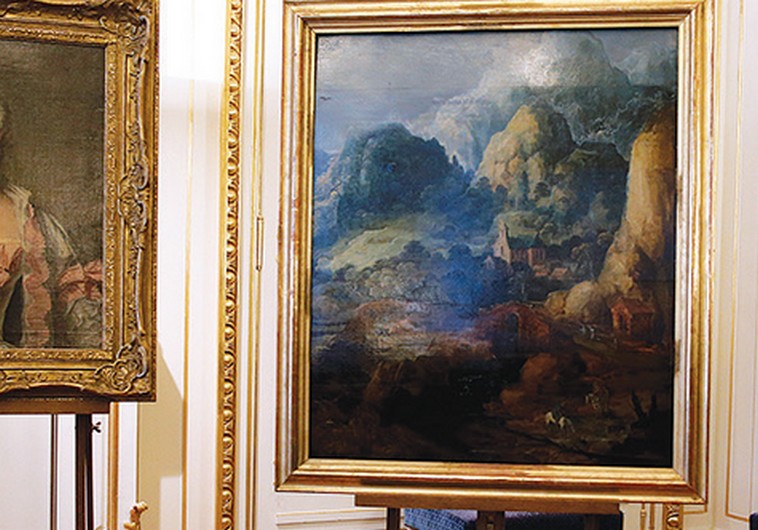 THREE PAINTINGS seized by the Nazis are displayed at an official ceremony in Paris March 11, 2014. (photo credit:REUTERS)

The struggle over the restitution of artworks looted during the Holocaust took on added urgency for many Jewish organizations in the past week, with the announcement that the ownership of the Gurlitt collection may soon be transferred to a Swiss museum.

The collection of paintings, sketches and sculptures was discovered by German tax authorities in Munich during a 2012 raid on the homes of recluse Cornelius Gurlitt, who inherited the collection from his father, who took orders from Hitler to buy and sell so-called “degenerate art” to fund Nazi activities during World War Two.

Germany has faced criticism from around the world for failing to publish immediately the full list of artworks, for keeping silent for nearly two years about the trove and for potentially having had no legal right to seize the pieces.

Immediately prior to his death in May, Gurlitt willed the collection to Switzerland’s Kunstmuseum Bern. The Museum of Fine Arts has indicated that if it accepted the art, it would act in accordance with the Washington Principles, a set of guidelines regarding the handling and return of looted cultural works, and a decision is expected within days.

According to The Wall Street Journal, Stuart Eizenstat, a special adviser to US Secretary of State John Kerry on Holocaust issues and a special negotiator with the Conference of Jewish Material Claims Against Germany, expressed support for the transfer, indicating that he believed that it would facilitate restitution.

Those working on issues of restitution on behalf of survivors and their descendants have expressed mixed reactions to the possibility of the work going to Switzerland. It’s a move that Berlin is said to strongly support, but many have indicated that they have strong reservations about the entire affair.

Christopher Marinello, who runs the London based organization Art Recovery International and has represented clients seeking restitution in the Gurlitt case, indicated that he for one was “very much in favor of their acceptance of the bequest.”

Both the Gurlitt family and the museum have committed to make restitution for stolen works in accordance with the Washington Principles, he explained, adding that the museum’s acceptance would create an “opportunity to spearhead a reexamination of the issue of Nazi looted art in Swiss Museums and private Swiss collections,” which he deemed “sorely needed.”

While Germany’s handling of the case has been “less than exemplary,” agreed Anne Webber, co-chair of the Commission for Looted Art in Europe, and Switzerland likewise has a poor record in such matters, “taking the Gurlitt collection could provide the trigger for undertakings that work both for the Gurlitt collection and throughout the country and ensuring restitutions take place.”

“They are very valuable and will shed light on the looting of Jewish victims,” they said.

According to Sam Dubbin, counsel to The Holocaust Survivors Foundation USA, survivors and their families are outraged over the possibility of the art winding up in Switzerland.

Such a move would absolve Germany of the necessity of determining the provenance of the items in the collection, shifting the burden onto survivors and their families “to find and recover their legacies.”

“It is the same disgraceful tactic all of these countries, including Germany and even the United States, along with the insurance companies have continuously used – hiding the ball and waiting for the survivors to die,” he said.

“It would be a moral outrage for the Kunstmuseum Bern to accept ownership of disputed works that Jewish owners were forced to sell or abandon, unless it launched a major provenance initiative, restoring works when possible to original owners,” she said.

Meanwhile, Julius Berman, the president of the Claims Conference has demanded that the details of the arrangement negotiated between the Kunstmuseum and the Gurlitt Task Force, a group set up to determine the provenance of the works in the collection, be made known to the public as soon as possible.

“The Kunstmuseum Bern has publicly stated that it will not keep any looted items – those that were confiscated from Jews or taken in forced sales below market rate. But to know which items were looted, there must be a transparent determination of provenance (history of ownership), publication of the findings and a free and fair restitution claims process. To date, these have not been done.”

According to Bobby Brown, who until recently headed Project HEART, an Israeli restitution initiative, the acceptance of any pieces lacking certification as to not having been looted would make the museum’s administration “accessories to theft after the crime.”

“Because the dead son of one of the major art fences for the Nazi regime’s looted art willed these pieces to the Kunstmuseum is no reason why this ‘cultural’ institution should eat from the fruit of the poison tree,” he said, warning of legal battles ahead.

While the World Jewish Congress declined to comment on the matter until the museum makes an official announcement, Ronald Lauder, the group’s president, did tell German news magazine Der Spiegel in earlier this month that the museum “would be crazy to accept this bequest.”

Such a move would “open a Pandora’s Box and trigger an avalanche of lawsuits,” he said, adding that “we’d be more than happy, because it would open Switzerland to our researchers and lawyers.”

When asked to respond to the concerns expressed by Jewish organizations, spokesmen for both the Kunstmuseum and Bavarian State Justice Ministry declined comment and invited the Post to attend a joint press conference dealing with the Gurlitt collection on Monday.

Reuters contributed to this report.