There was a curious non-development today in Austria concerning the dispute over Gustav Klimt’s famed “Beethoven Frieze” located in the Secession Building in Vienna.  At issue is whether a post-war sale by Jewish survivors to Austria of a famous painting that the law of the time did not allow to be exported can be considered a sale under duress and justify restitution.

The building (the Wiener Secessionsgebäude) stands at the end of the Naschmarkt, and is an iconic example of Jugendstil architecture. 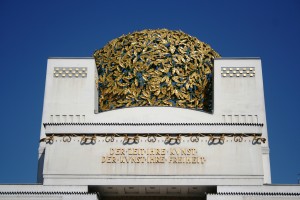 The frieze was painted onto the walls of the building in 1902 for the 14th Secession Exhibition as part of a Gesamtkunstwerk homage to Beethoven’s Ninth Symphony (a statue of the composer was also included by another artist), and left there afterwards.  It was owned by the Lederer family, Viennese Jews who fled to Switzerland after the Anschluss in 1938, leaving the bulk of their collection behind.

The current dispute is not entirely focused on the Nazi-era oppression, however, but also what happened after it.  Thankfully, Erich Lederer survived, but as was often the case, had little interest in returning to the city that had turned him out.  Austria’s immediate post-war restitution law provided for the return of artwork that had been stolen or taken under duress by the Nazis, but with a catch: certain artwork could not physically leave Austria.  So, for a survivor living in Zurich, London or New York, this was of limited use.  What it created, of course, was the opportunity for buyers to “take it off their hands” (something the late Dr. Rudolf Leopold of the eponymous Leopold Collection—possessor of the Portrait of Wally when it was seized in 1998—was accused of in that case.  He consistently denied it).  In the Lederer case, the frieze was actually formally restituted, but without an export license.  According to the family, Austria would only grant an export license for the family’s other art if they agreed to sell the frieze to Austria at a bargain rate.  Eventually, a sale was consummated in 1973 for $750,000, which the family asserts was less than half its value.

As we have discussed previously, Austria’s Advisory Committee (Der Beirat gemäß § 3 des Bundesgesetzes über die Rückgabe von Kunstgegenständen aus den Österreichischen Bundesmuseen und Sammlungen, BGBl. I Nr. 181/1998 i.d.F. BGBl. I Nr. 117/2009, (Kunstrückgabegesetz)) has performed reasonably well on balance since its formation in 1998.  There are certainly exceptions where people have spoken out, but critically for the Lederer case, the Austrian Commission has shown sensitivity to sales under duress that Germany’s Limbach Commission, most notably, has not.  Earlier this year, a collection of botanical drawings was restituted even though the case for duress was circumstantial; a Jewish disposition of property in Nazi Vienna that went through the hands of Baldur von Schirach speaks for itself even without any further details.

The announcement of the postponement is therefore interesting.  The website says simply, in German and English versions:

In the following case:
Collection Erich Lederer, Beethoven-Fries
the advisory board adjourned [its] consultations.

Interestingly a press wire also went out today that quoted the Austrian Cultural Ministry as saying that the matter would be taken up “in the next sitting” of the Commission.

I do not know how the case had been proceeding or whether a decision was expected shortly, but it did strike me as odd that an announcement was made that, in effect, there is no announcement.  The Commission’s website historically just lists decisions, not updates.

Will the Commission extend its earlier logic of sales under duress to the 1973 sale?  If it does, it could legitimize a whole new category of claims.   Sales under duress and “flight goods” like this are an emerging area of contention.  A well-received conference last summer in Winterthur spotlighted the issue, but even last week Swiss museums who were surveyed about whether the Gurlitt case would prompt further examination in other Swiss museums more or less said “no.”  So the Lederer case remains an important bellwether.