Work in Helmut Newton photographs could be looted masterpiece 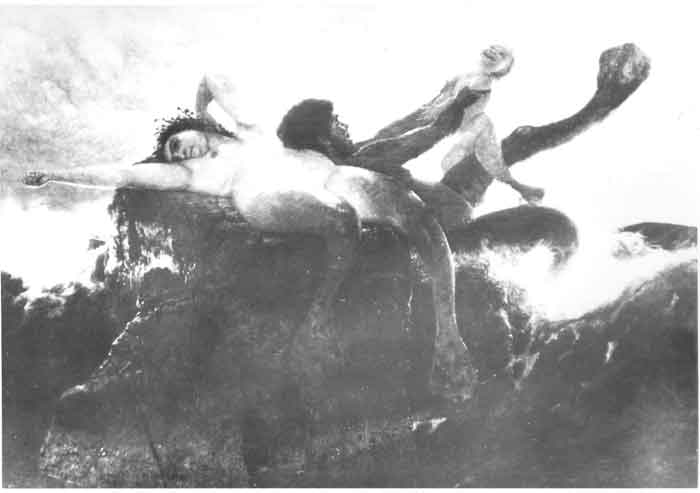 Is a painting in the background of two photographs by Helmut Newton a missing masterpiece by Arnold Böcklin? Tritonenfamilie (Triton family), 1880-81, which the work in the photographs resembles, was looted from the collection of the Kaiser Friedrich Museum (now the Kulturhistorisches Museum) in Magdeburg, central Germany, at the end of the Second World War. The work is among the most important of the 400 paintings that the institution lost towards the end of the war.

A photograph taken by Newton in 1977—Jenny Kapitan, Pension Dorian, Berlin—depicts his favourite model in a Berlin boarding house. She is naked, with a bandaged leg and a neck brace, and leans on a stick; a version of Tritonenfamilie hangs above a bed. The painting probably belonged to the hotel, and was used by Newton as a prop.

The second photograph, of the Playboy model Yvonne Honsa, was taken in Newton’s apartment in Monte Carlo in 1999, where what appears to be the same painting is in the background. Andrea Linnebach, a Böcklin specialist from the University of Kassel in Germany, noticed Tritonenfamilie in the two photographs a few years after Newton’s death in 2004.

The Magdeburg museum became aware of Linnebach’s discovery in 2008. Successive directors, with the backing of the Prussian Cultural Heritage Foundation, have been making unpublicised efforts to get information from the photographer’s widow, June Newton, who is now aged 91.

Tritonenfamilie was bought by the museum in 1907. The institution’s paintings were moved to salt mines in Stassfurt in 1943, to protect them from British bombing raids. A fire broke out in the huge mining complex within hours of the arrival of US troops in April 1945, and three months later, the area was taken over by Soviet troops. It is possible that Tritonenfamilie was moved from the salt mine to a bank vault in Magdeburg before the end of the war. This bank was also looted: a few pictures that had been deposited there were later recovered from the Soviet Union.

Tobias von Elsner, a historian at the museum, says that the work could have been looted by US or Soviet troops, German civilians or Dutch or Polish forced labourers from a secret aircraft factory deep in the mine. It is also possible that the painting was destroyed in the fire. However, Von Elsner believes that the piece “probably survives”.

But is the painting that features in Newton’s photographs the original work or a copy? Böcklin does not seem to have made full-size replicas of his paintings, and there is no record of another version of the work measuring 99cm by 140cm. It could be a copy by another artist, but this would have been difficult to produce after the war, because there are no colour photographs of the original work.

Matthias Harder, the curator of the Berlin-based Helmut Newton Foundation, says: “We don’t know anything exactly about this painting [the one used in Newton’s photographs], but we know that it cannot be the original Böcklin.” The foundation would not elaborate further.

If the Newton-owned Tritonenfamilie is the original, it increases the chances that other missing paintings from the museum survive. These might even include one of the greatest artistic losses of the war: Van Gogh’s The Painter on the Tarascon Road, 1888.