Two pieces of 18th century furniture have been returned from Germany to Wilanów Palace on the outskirts of Warsaw, from where they had been looted during the German occupation of Poland. 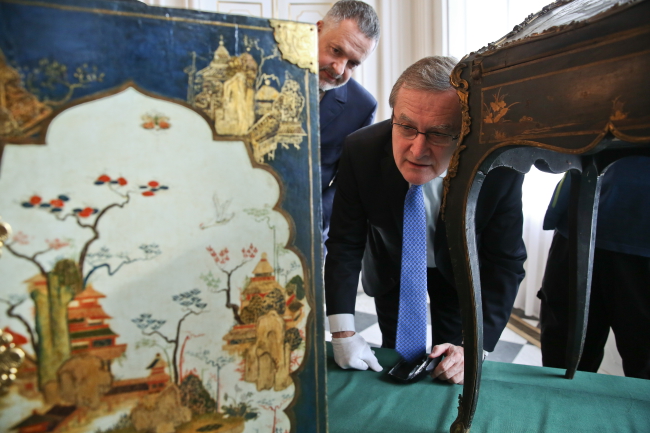 They were handed over to Deputy Prime Minister and Minister of Culture and National Heritage Piotr Gliński by the Chairman of the Bundesrat, the upper house of the German Parliament, and Prime Minister of the Free State of Saxony Stanislaw Tillich at a ceremony, Wednesday, at the palace, the former residence of Polish King Jan III Sobieski.

Tillich described the event as a good contribution to the friendly cooperation between the two countries and Gliński stressed its symbolic significance.

“Thanks to the decision of the government of Saxony, the work of museologists and cooperation with the Polish side, it has been possible to achieve a common success,” Gliński said.

“It is an example of good cooperation of civilized institutions in civilised countries which approach these matters with tact and the necessary care,” he continued.

The two pieces of furniture are a Rococo desk, the work of French craftsmen dating from around 1745, and a richly-ornamented cabinet in Chinese-style (Chinoiserie) from the beginning of the 18th century, containing fifteen drawers. Both items are fine examples of the Far Eastern influences on European art of the time.

The furniture was traced thanks to the 'Daphne' inventory project carried out in the State Art Collection in Dresden. Once it was established that the items could have belonged to the collection of the Wilanów Palace, talks began with the Polish authorities on the conditions of their return. In November 2015 the government of the Free State of Saxony approved the decision to return the desk and the cabinet to Poland.

Close to 63, 000 works of art which went missing from Polish museums during World War Two have been identified so far. They include works by such masters as Rubens, Rembrandt and Durer, as well as canvases by such Polish painters as Aleksander Gierymski (47 works), Jan Matejko (36 works) and Jacek Malczewski (59 works).