World Jewish Congress President Ronald S. Lauder and actress Dame Helen Mirren were among the witnesses called at a hearing of the US Senate's Judiciary Committee on Tuesday which dealt with Nazi-looted art works. 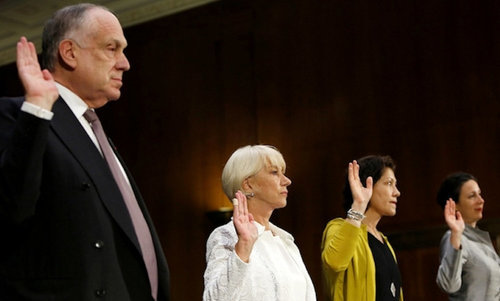 Four senators recently presented a bipartisan bill, the Holocaust Expropriated Art Recovery (HEAR) Act, which aims to help Shoah survivors and their families recover art stolen by the Nazis prior to, or during, World War II.

The legislation was introduced to the Senate last April by Texan Senators John Cornyn (R)and Ted Cruz (R), as well as New York Senator Chuck Schumer (D) and Connecticut Senator Richard Blumenthal (D). The HEAR Act would would primarily loosen the statute of limitations to allow claims made within six years of when victims or their families find looted art and prove their right to it. The bill was drafted to respond to previous cases in which, its proponents say, claims were decided based on legal technicalities, not the merits.

“It is our moral duty to help those survivors and their families achieve what justice can be found,” said Schumer.

Ronald S. Lauder (who was present on behalf of the World Jewish Restitution Organization), actress Helen Mirren (who portrayed Maria Altmann in the movie 'Woman in Gold'), International Director of Restitution at Christie’s Monica Dugot, as well as the president of the Commission for Art Recovery, Agnes Peresztegi, testified before the committee.

“What makes this particular crime even more despicable is that this art theft, probably the greatest in history, was continued by governments, museums and many knowing collectors in the decades following the war,” Lauder said, adding: “This was the dirty secret of the post-war art world, and people who should have known better, were part of it.

"There are museums here in the United States that have been waiting out the clock to pass the statute of limitations.This also forces claimants to spend enormous amounts of money on legal fees – another strategy to make them give up,” Lauder explained. “This is not justice. Stalling claims is an abuse of the system.”

Helen Mirren said her experience of shooting the 'Woman in Gold' movie had opened her eyes to “mankind’s capacity for indifference,” and fueled a personal resolve to do her part to “try to open the eyes of others and help make people aware of the sad fact that – more than 70 years later – victims of the Holocaust and their families are still contemplating whether to seek restitution for what was stolen from them and lost under the most horrible of circumstances.

"As humans, we are incapable of changing the past, but fortunately we have the ability to make change today,” the actress added.

The Conference on Jewish Material Claims Against Germany and the World Jewish Restitution Organization revealed in a 2014 report that most countries had fallen far short of their promises to help victims and their families recover their artwork. In 1998, 44 countries signed the Washington Conference Principles on Nazi-Confiscated Art, an agreement calling for an expeditious, “just and fair solution” for victims of Nazi persecution. But the treaty lacked the force of law, necessitating a bill like the one now before the Senate Judiciary Committee.

Lauder told the senators that the art legislation took great strides toward righting a wrong that has defied an easy solution. “I wish this legislation had happened 10 or 20 years ago, but the fact is that it’s happened, it’s going to have a major effect on the future,” he said. “And many works of art - I use the expression ‘the final prisoners of World War II’ - will finally find their rightful owners.”

Watch the video recording of the hearing