Paintings recovered by Monuments Men and entrusted to Bavaria were instead sold, in some cases to prominent Nazis 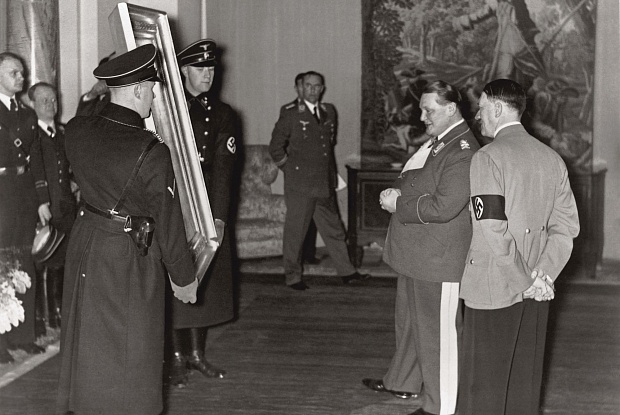 Thousands of artworks looted by the Nazis from Jewish families and recovered by the Monuments Men after the Second World War were later sold instead of being returned to their original owners, new research shows.

Entrusted with returning about 10,600 artworks to the original owners after the Monuments Men left Germany, Bavaria’s State Paintings Collections instead gave away or sold property looted from Jews to Germans—including to some prominent Nazis, the London-based Commission for Looted Art in Europe (CLAE) has revealed. Claims by the heirs of the original Jewish owners and requests for information are still frequently stonewalled, says Anne Webber of CLAE.

CLAE uncovered this history while investigating a painting of a Dutch square by Jan van der Heyden, currently in the possession of the cathedral in Xanten, a small town in North Rhine-Westphalia. It once belonged to the Jewish Kraus family, who fled Vienna in 1938. Their possessions were seized and sold to benefit the Nazi regime.

Dutch Square was purchased by Heinrich Hoffmann, Hitler’s personal photographer, whose daughter Henriette married Baldur von Schirach, the Reich Youth Leader. After the war, Hoffmann’s collection was seized by the Allies, along with those of other prominent Nazis, and entered the custody of the Monuments Men. The Monuments Men passed responsibility for restituting the thousands of artworks still in their care to the Bavarian state when they left Germany.

But instead of restituting them to the original Jewish owners, the Bavarian State Paintings Collections returned them to the Nazis who had immorally acquired them, or sold them to other buyers. Henriette von Schirach bought back Dutch Square, along with dozens more artworks, furniture and carpets. Other members of the family successfully reclaimed artworks from Hoffmann’s collection. Emmy Göring, the wife of Reichsmarschall Hermann Göring, also filed claims, though the Bavarian State Paintings Collections denies researchers access to the archives that would reveal whether she was successful, Webber says.

"It is particularly striking that the Hoffmann family was getting virtually everything back that it claimed with minimal proof of ownership and this went on for almost two decades,” Webber says. “The burden of proof was much higher for claims from Jewish families—from the victims of these Nazi leaders."

Von Schirach sold Dutch Square a few months after recovering it. It was purchased by the Xanten cathedral community, which has so far rejected a claim by the grandson of the Kraus couple, despite watertight proof of his family’s ownership.

“The family feels that every possible German institution has been denying them justice,” Webber says.