Nazi-looted artwork is discovered in museums in Sarasota, West Palm 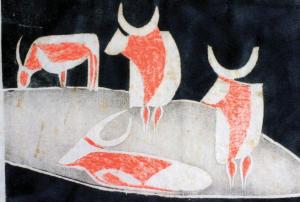 Ewald Matare’s woodcut titled “Pasture,” once featured in the Degenerate Art Exhibition, is currently owned by the Ringling.

Adolf Hitler understood the power of art. He was, after all, an artist long before he became the leader of the Nazi party. So it should come as no surprise that art played a role in his notorious regime.

Most people know — thanks in part to the movie “The Monuments Men” (2014; starring, co-written and directed by George Clooney) — that the Nazis confiscated artwork for their personal enjoyment. But the looting extended beyond paintings and sculptures admired by Hitler and his cohorts. In the years leading up to World War II, the Nazis ransacked museums, churches and private residences across Germany to purge the country of “degenerate” art. Over time, both Nazi-approved and Nazi-censured stolen artwork made its way into private and museum collections around the world. 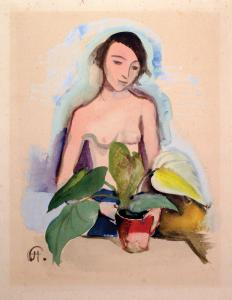 “Nude Girl with Flower Pot” by Karl Hofer is an example of “degenerate” art now owned by the Ringling.

Fast-forward to 1999, when the American Alliance of Museums issued guidelines encouraging museums to revisit the “provenance” (ownership history) of works in their collections that changed hands in Europe between 1933 and 1945 (labeled “Nazi-era art”). The objective was to identify and return artwork unlawfully appropriated by the Nazis.

Both the Ringling Museum of Art in Sarasota and the Norton Museum of Art in West Palm Beach have done the necessary work to comply with the AAM’s guidelines. Both institutions now know the history of the artwork looted by the Nazis that reside in their collections. The works and their provenance reveal flipsides of the Nazi art coin.

The great and the degenerate 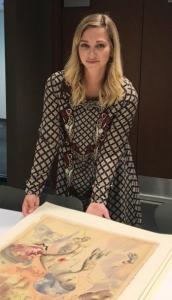 Throughout his reign, Hitler used art as a propaganda tool. In 1937 Munich, the Reich Culture Chamber, with Minister of Propaganda Joseph Goebbels at the helm, organized two contrasting art exhibitions: the Great German Art Exhibition and the Degenerate Art Exhibition.

The Great German Art Exhibition included 900 pieces of artwork compatible with Hitler’s vision of an ideal world. Nudes depicted classically beautiful bodies (all of which, needless to say, were lily white). Representational work was endorsed, whether a mother feeding her child or a German vista. Befitting of such a significant propaganda effort, the exhibit was held in a grandiose venue, the newly constructed House of German Art.

Across town, the Degenerate Art Exhibition contained 650 works by Jews, communists and other artists whose “modern” style was reviled by Hitler. He publicly declaimed the art in the exhibition, promising that “‘works of art’ which cannot be comprehended and are validated only through bombastic instructions for use … will no longer be foisted upon the German people.” 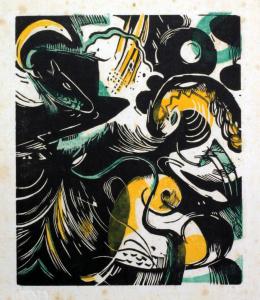 In contrast to the Great German Art Exhibition, the Degenerate Art Exhibition was housed in a decrepit building. Visitors climbed a rickety set of stairs to view displayed in cramped rooms where paintings hung with no sense of order. Graffiti-like writing on the walls provided commentary such as “nature as seen by sick minds” and “revelation of the Jewish racial soul.”

The Degenerate Art Exhibition traveled for three years as a cautionary tale about what people would be subjected to without the Nazis at the helm. More than 3 million people visited the exhibit — more than three times the number who viewed the Great German Art Exhibition. 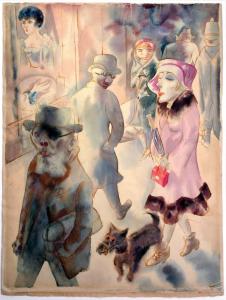 George Grosz’ “Evening Street No. 5” was part of the Beattie “degenerate” art gift to the Ringling.

Once the show was disbanded, the Nazis had no use for the art in the exhibit (or the more than 15,000 other pieces of “degenerate” art they had stolen, for that matter). Thousands of paintings by artists such as Picasso, Chagall and Dali were burned. Some artwork, however, was sold to foreigners in exchange for much-needed American dollars.

Fortunately, one of those foreigners was a press correspondent.

Edward W. Beattie Jr. was a European correspondent for United Press during World War II. While stationed in Czechoslovakia, the opportunity arose to purchase art from the Degenerate Art Exhibition. He bought 12 works on paper that could be rolled up and readily transported to the United States. 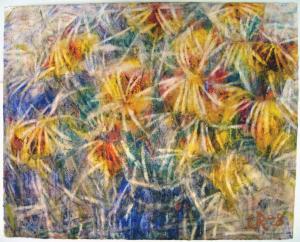 Mr. Beattie’s collection is illustrative of the art condemned by the Nazis. It’s easier to understand Hitler’s objection to George Grosz’s “Evening Street No. 5,” in which an Aryan woman is surrounded by unsavory characters. The passersby — even the dog — have bulging eyes that make them look crazed and dangerous. The eyepatch-adorned gentleman is an unwelcome reference to previous battles that didn’t turn out so well.

But Nazi concerns about other works salvaged by Mr. Beattie are more difficult to discern. Was it the abstraction of Christian Rohlfs’ “Flowers” that made it unpalatable? Did the unfinished quality of Karl Hofer’s “Nude Girl with Flower Pot” render it subversive? 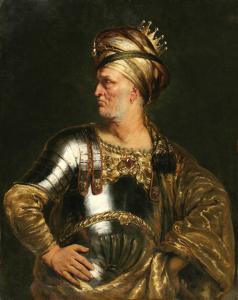 “King Pyrrhus,” owned by the Norton Museum of Art, was saved by the Monuments Men.

In 1954, Mr. Beattie donated his collection to the Ringling with some fanfare. He had, after all, saved the works from destruction by the Nazis. An exhibit was mounted after which the artwork made its way to the Ringling’s vault.

Almost half a century later, the AAM issued its recommendations concerning Nazi-era art. The Ringling embraced the project’s goals immediately, but the task was daunting. Physical files containing the provenance history of the museum’s tens of thousands of works would have to be computerized and examined.

Enter Lauren von Bechmann, who had previously investigated the ownership history of a painting by degenerate artist Edvard Munch.

By the time Ms. von Bechmann joined the museum last year, its records had been digitized and any troubling gaps in ownership flagged. And she was eager to take on another provenance project — and made it her mission to identify the rightful owners of the works gifted by Mr. Beattie.

Her job was made easier by the Nazis’ excellent record-keeping. Their inventory of the Degenerate Art Exhibition boldly included the institutions and families from whom the works had been stolen. But this list, like the provenance records themselves, floated around for decades in paper form inaccessible to museums for their research. It wasn’t until 2014 that a computerized version of the inventory was published.

Even with the inventory list in hand, some detective work was required by Ms. von Bechmann. Some works were marked in blue crayon with numbers that neatly corresponded to data on the list. Others had only a stamp whose meaning was unclear. Some lacked even the artist’s signature.

Earlier this year, Ms. von Bechmann completed her project after identifying a number of small German museums as the artwork’s proper owners. The institutions have been contacted with the good news. It is anticipated the works will be returned to them in due course, hopefully after a final public showing.

Ms. von Bechmann is thrilled to have been a part of this process.

“Your work has a lot of meaning when contributing something to society like the return of cultural property,“ she said.

From Goering to the Norton

The history and style of the Norton Museum’s “King Pyrrhus” stand in sharp contrast to the Ringling’s “degenerate” art.

“King Pyrrhus” was painted by Rembrandt student Ferdinand Bol. The classical image of the proud military commander is a prime example of art given the Nazi stamp of approval. The painting’s previous ownership by King Carol I of Romania and various French and Belgian aristocrats enhanced its allure. At the time of World War II, the painting was the property of Jewish bankers Marcel and Daniel Wolf.

When the Nazis made their way to Holland, the Wolfs fled Amsterdam, leaving “King Pyrrhus” and other treasures in their gallery. Gen. Friedrich Christiansen, supreme commander of the Nazi forces in the Netherlands, added operation of the gallery to his duties.

Gen. Christiansen negotiated the sale of “King Pyrrhus” to his friend Reichsmarschall Goering, laundering the transaction through a second gallery in an attempt to legitimize it. The purchase price was a mere pittance of the value of the painting. The masterpiece joined Goering’s ever-growing collection of appropriated art and was displayed at Carinhall, his castle residence outside of Berlin.

As World War II drew to a close, Goering moved the best of his illegally obtained art collection to a bunker in Berchtesgaden for safekeeping. Just as in the movie, the Monuments Men discovered the cache. “King Pyrrhus” was repatriated to authorities in The Hague and subsequently returned to Daniel Wolf.

Mr. Wolf sold the painting in a 1960 Christie’s auction to George and Valerie Delacorte. In 2007, Mrs. Delacorte donated “King Pyrrhus” to the Norton Museum.

“The saga of this painting — from its creation to its looting by Hermann Goering himself to its return to its rightful owners to its donation as a gift to the Norton — truly makes history come alive,” said Norton Director of Communications Scott Benarde. “It is one of the looted Nazi art stories with a satisfying ending at a time when so many other stories from that era have yet to end well.”

Although each piece of looted art that is identified and returned is a victory worth celebrating, the daunting quest continues. The Ringling and the Norton have identified the items of Nazi-era art in their collections, additional provenance research on the works remains to be done — and museums across the country will continue to scour their records in a similar fashion for years to come.

Only then will the myriad pieces of Nazi-seized art find their way to their true owners, wherever in the world they are.