A ‘Moral Imperative’ to Recover a Lost Art Legacy 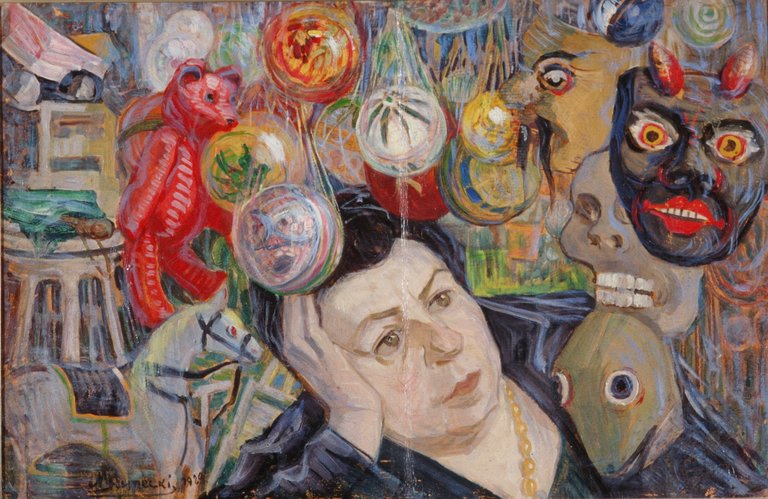 The last time anyone is known to have heard from the Polish-Jewish artist Moshe Rynecki was in 1943, when his wife, Perla, received a postcard that he had sent from Majdanek, a concentration camp near Lublin, Poland. The Nazis had transported him there from the smoldering ruins of the Jewish ghetto in Warsaw. The rest of his family had stayed in Warsaw, posing as Christians. His scrawled message reassured his wife that he was well and “painting in the camp,” his son, George Rynecki, recalled in a memoir written decades after the war.

By the time Mr. Rynecki was sent to Majdanek, he had entrusted about 800 of his artworks to friends. A few dozen works in family hands inspired his great-granddaughter, Elizabeth Rynecki, to write a book, “Chasing Portraits: A Great-Granddaughter’s Quest for Her Lost Art Legacy,” to be published in September. Ms. Rynecki, who helps run a family real estate business near San Francisco, has also created an online database of Mr. Rynecki’s paintings and is finishing a documentary based on her decades of research.

The quest “was a moral imperative I had to fulfill,” she writes in the book. She added in a phone interview that the need to research became ever more urgent, since potential eyewitnesses were dying off. “I felt like if I didn’t do it now, the story would be gone,” she said.

Mr. Rynecki, whose father was a tailor specializing in uniforms, insisted on studying art. His parents warned him he was violating religious rules against creating graven images. To earn a living, he was set up in the art supplies business. Perla Rynecki ran the store while he sketched.

“My specialty is only painting Jewish folk scenes,” he wrote to a colleague in 1930. He often depicted rituals at synagogues and religious classroom sessions. He portrayed factory workers, woodcarvers, blacksmiths, shoemakers, musicians and peddlers. He painted images of atrocities as well, including Cossacks raping Jewish women in pogroms.

In the 1920s and ’30s, a handful of his works were published in newspapers and magazines, and he had exhibitions at galleries and exposition halls in Warsaw and Brussels. He traveled through the countryside to find subject matter; one artists’ colony, on a riverbank near Lublin, allowed Jews and Christians to paint side by side. “They escaped prejudice and were able to focus entirely on their art,” Ms. Rynecki writes in the book.

In September 1939, the Nazis invaded Poland. Around that time Mr. Rynecki removed his canvases from their wooden stretchers and rolled them into a half-dozen bundles to store at friends’ homes. After the war, Perla Rynecki retrieved one bundle from a Warsaw cellar. More of Mr. Rynecki’s artworks are said to have been found on Warsaw streets, stored in a barn and salvaged from a train that had been bombed.

The family owns about 100 of his artworks, a few of which have been donated to institutions: a tableau of a wedding party was given to the Magnes Collection of Jewish Art and Life at the University of California, Berkeley, and a watercolor portrait of Jewish refugees in the Warsaw ghetto was sent to Yad Vashem in Jerusalem. Ms. Rynecki has found items in private collections in the United States, Canada, Poland, Israel and France and, in Warsaw, at the National Museum and the Emanuel Ringelblum Jewish Historical Institute.

Many works had been creased and torn. One collector told Ms. Rynecki that his scene of a Cossack pogrom by Mr. Rynecki had to be laboriously smoothed out. “It seems like someone once crumpled up the entire piece into a small ball of paper,” the owner told Ms. Rynecki.

Photos, prints and descriptions exist of many more paintings that have yet to be tracked down. In 1993, Sotheby’s sold Mr. Rynecki’s scene of a crowded cafe and his portrait of an accordion player. (The paintings, offered as a pair, brought $1,700.) It’s unclear where they are now. A batch of photos of Mr. Rynecki’s work is filed at the University of Toronto, in the papers of Otto Schneid, a Polish art historian who knew Mr. Rynecki and researched his career. In the 1930s, Mr. Schneid completed a dictionary of 20th-century Jewish artists, but it was never published; the Nazis destroyed his printing plates.

Copies of Mr. Rynecki’s work are now being produced at Chinese workshops. The versions are available with and without his signature. Ms. Rynecki and her father, Alex, have acquired two. “We thought they were hilarious,” she said, adding that she plans to write “Made in China” on the backs.

Still, loose ends remain. Perla wrote to her son, George, in Polish after the war, and those letters have not been translated. George often told the family that he wanted the artworks kept together, on display and not in storage or on the market, and family members have not decided how to fulfill his wishes.

When people ask Ms. Rynecki when she will finish her work on the inherited paintings and the missing ones, she said she replies, “I’ll never be done, ever.”