Montreal’s Max Stern Foundation gets its Bacchus back 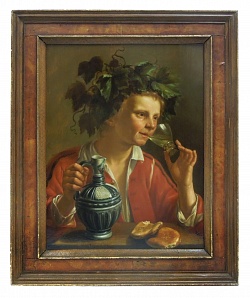 Jan Franse Verzijl (1599-1647), Young Man as Bacchus
Today, the FBI returned the painting, Young Man as Bacchus by the Caravaggist painter Jan Franse Verzijl to representatives of the Montreal-based Max and Iris Stern Foundation, in a ceremony held at New York's Museum of Jewish Heritage. Stern was a German-Jewish art dealer who was forced to close his gallery in Düsseldorf and sell his inventory by the Nazi regime.

The FBI found the picture at the Spring Masters Fair in May 2015, when it was offered for $60,000 by the Galería Soraya Cartategui of Madrid. The Spanish gallery was selling the work in partnership with Galleria Luigi Caretto of Turin, which included Stern’s ownership in a provenance on its website. (The picture was originally attributed to another Dutch Golden Age painter, Salomon de Bray, when it was in Stern’s inventory and when Sotheby’s sold it in 1987.) When they were informed of the claim, the Italian gallery voluntarily waived its ownership of the painting so it could be returned to the estate.

Stern, a prominent dealer who took over his father’s gallery in Düsseldorf, was ousted from the Reich Chamber of Fine Arts in 1935 and forced to sell the art in his gallery and private collection. Around half of the 400 works were sold in 1937 at Lempertz in Cologne. Others, including Young Man as Bacchus, were sold separately, and their status as looted works has been challenged.

“The significance of this painting is, in the long term, strategic, rather than just recovering another painting,” says Willi Korte, who investigated the Bacchus case for the Stern Foundation. When the FBI seized the work, it considered it stolen property that entered the US. “We now have a solid foundation upon which we can place the other paintings as stolen works of art.”

Stern’s estate now benefits the foundation, which has actively worked to track down the missing art, as well as Concordia and McGill Universities in Montreal and the Hebrew University in Jerusalem.