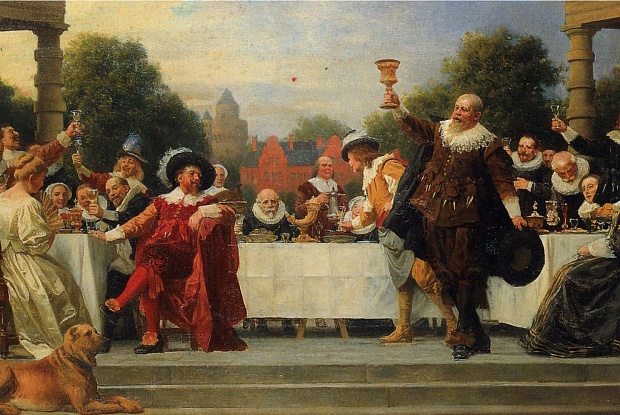 Germany’s government, museums and research institutes are teaming up with the heirs of a Jewish media mogul to track down thousands of paintings, books, sculptures and antiques stolen by the Nazis during the Second World War.

“This is a great example of Germany building bridges rather than walls,” said Roger Strauch, the step-great-grandson of Rudolf Mosse, at a press conference in Berlin on 7 March. The collaboration allows the Mosse Art Restitution Project “to take advantage of a tremendously talented provenance research community in Germany”.

The publisher, philanthropist and art collector Rudolf Mosse was one of the richest men in Berlin at the end of the 19th century. His heirs created the Mosse Art Restitution Project in 2012 to recover his missing art collection. They are now expanding that work with the Mosse Art Research Initiative, which has a budget of €500,000 funded by the heirs and the state-run Lost Art Foundation.

Other participants include the Berlin State Museums, the Foundation of the Jewish Museum Berlin, the Berlin State Archives, the Prussian Cultural Heritage Foundation and Berlin’s Free University, which will conduct the research under the leadership of the art historian Meike Hoffmann.

Mosse’s three-storey neo-Baroque palace on Berlin’s Leipziger Platz—known in artistic circles at the time as the “Mosseum”—contained works by artists such as Max Liebermann, Carl Spitzweg and Adolph Menzel.

His company produced 130 publications and journals, including the flagship Berliner Tageblatt, a liberal non-partisan newspaper that was a staunch advocate of democracy even before the Weimar Republic. After his death in 1920, Mosse bequeathed his estate to his daughter, Felicia Lachmann-Mosse. His powerful publishing house was managed by his son-in-law Hans Lachmann-Mosse.

Under the Nazis, the Berliner Tageblatt quickly became a symbol of the hated “Jewish press”. Felicia and Hans Lachmann-Mosse fled to Switzerland in 1933 and later emigrated to the US. Their possessions, including the inherited art collection, were seized and handed to the Nazi dealer Karl Haberstock as a trustee. Much of it was sold at auction in 1934.

The Mosse Art Restitution Project has listed over 1,000 objects that were looted. “We believe there are thousands more that we have not been able to identify,” Strauch said. “This is probably one of the largest art restitution projects ever.”

The heirs have so far recovered fewer than three dozen objects, Strauch added. The Prussian Cultural Heritage Foundation reached settlements on nine works over the past two years, including a monumental lion by the artist August Gaul. In June 2016, the Kunsthalle Karlsruhe agreed to repay the family for a painting by Karl Blechen that had hung in the museum since 1969. And in October 2016, the Jewish Museum in Berlin returned an oil sketch by Anton von Werner. It was a preparatory work for a large painting commissioned by Mosse in 1899 for his dinning room that shows the collector in Renaissance garb hosting a family banquet.