Should statutes of limitations apply to possibly looted art?

The two works are haunting and brooding, showing women in various degrees of distress. In one, a kind of anti-portrait, a woman in a black dress sits ramrod straight in a chair, her arms held at stiff right angles, her eyes large and eerily colorless.

In the other, a woman lies prone on the ground, heels and hose intact, a long black skirt bunched up over her knees, one bare arm tucked around her body and shielding her face.

The two paintings by the celebrated early 20th-century Austrian painter Egon Schiele — “Woman in Black Pinafore” and “Woman Hiding Her Face” — are now at the center of a possible precedent-setting legal case before a New York appeals court involving the provenance of Holocaust-era art.

The case — in which the heirs of Viennese cabaret performer Fritz Grünbaum claim the works were looted by the Nazis — is the first test of the Holocaust Expropriated Art Recovery (HEAR) Act, passed last year in Congress. It is designed to nullify all state statutes of limitations that until now have thwarted heirs’ attempts to recover their family’s artwork and other valuables stolen by the Nazis; in some cases those meant the claims expired even before the end of World War II.

But an earlier court ruling involving another Schiele painting from Grünbaum’s is complicating the heirs’ efforts. The art dealer selling the two paintings in question cited a 2010 federal court ruling finding that there was no evidence the paintings were looted, and that the heirs waited too long to file a claim. The dealer, Richard Nagy, noted that the two paintings were among 53 works by Schiele that were sold to a Swiss art dealer by Grunbaum’s sister-in-law in 1956. 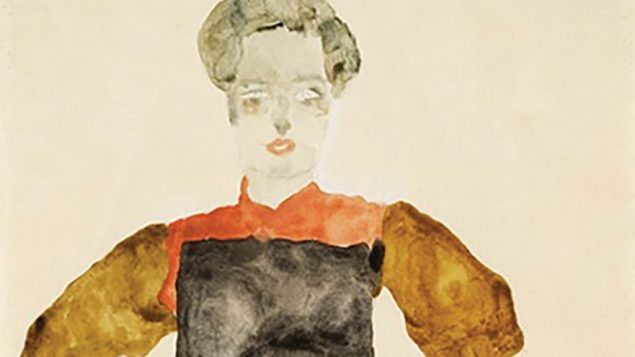 The Nazis arrested Grünbaum in 1938 and murdered him in the Dachau concentration camp three years later. Before the Nazis murdered his wife, Elisabeth, in 1942, she inventoried the family’s 449 works of art and signed Nazi documents purporting to voluntarily transfer them to the Third Reich.

In the 2010 court case, evidence was presented claiming the Nazis did not confiscate all 449 works of art but rather allowed the sister-in-law, Mathilde Lukacs, to keep 53 pieces. The judge therefore found that the 1956 sale was valid and dismissed the heirs’ claims to one of the paintings being sold. The court said also that the heirs should have been aware of their potential rights to the art, but that except for an aborted attempt by a family member in 1952 to recover Grünbaum’s music royalties, no further efforts were made.

Nagy’s lawyer, Thaddeus Stauber, argued also that the heirs in this case are seeking to evade the outcome of the 2010 decision in which many of the same issues and findings of fact were decided against them.

The Manhattan Appellate Court is asked to decide whether the 2010 decision applies to each of the 53 pieces in the collection or is limited to the one piece litigated in the prior case.

Grünbaum’s heirs who filed the current suit in 2015, Timothy Reif and David Fraenkel as co-executors of the estates of Leon Fischer and Milos Vavra (Fischer is descended from Elizabeth’s brother, and Vavra from Fritz’s sister) are relying on the HEAR Act to convince the court to hear their case. It requires “good faith efforts to facilitate the return of … works of art to the rightful owners in cases where assets were confiscated from the claimant during the period of Nazi rule….”

The HEAR Act establishes a six-year statute of limitations that starts only when a victim has actual knowledge of the identity and location of the artwork and his “possessory” interest in it. Thus, no claim may be dismissed within that six-year period.

Reif, a cousin of Grunbaum, refuted the 2010 court ruling that said the family had failed to pursue their claims to the art except for an aborted attempt to claim Grunbaum’s music royalties. He said the family did succeed in securing the royalties in 1965 and that over the years it has attempted to find Grunbaum’s art collection. In fact, he said that in 1997 the family claimed that a Schiele painting being exhibited at the Museum of Modern Art was part of the collection. But Reif said the family had insufficient proof at the time and was unable to secure it.

“He was a hero in the most fundamental sense,” Reif said of Greenbaum, noting that the entertainer wrote and performed material throughout the 1930s that opposed the Third Reich.

And because of his notoriety, Reif said, Greenbaum was recognized and stopped at the border when he attempted to leave Austria with his Czech passport following the Anschlus, the annexation of Austria into Nazi Germany in 1938. Reif said that his father, however, who also had a Czech passport, was able flee to Switzerland.

Raymond Dowd, the lawyer for the heirs’ estates, told The Jewish Week that he believes the 1956 sale of Grunbaum’s art to Swiss art dealer Eberhard Kornfeld “is a cockamamie story” supported by “fake” documents. Even the signature of Grünbaum’s sister-in-law was forged, he said, noting that her signature was misspelled on one of the documents.

In addition, Dowd said he has evidence that shows someone else — not Grünbaum’s sister-in-law — sold Kornfeld “Woman in Black Pinafore.”

“This is radically new evidence,” he said.

A friend-of-the court brief submitted on behalf of the heirs by the American Jewish Committee pointed out that in 1946 Austria officially repudiated all transactions involving the property of Nazi victims. And in 1955, Austria pledged to repudiate all spurious “transactions” of the Nazi era, including art “deals” that were really seizures, and to restitute all unreturned Nazi-looted property.

In its brief, the AJC wrote: “It is no accident that the HEAR Act resists the vestiges of the Shoah by laying upon all courts in the United States, state and federal, an obligation to restate and renew the noblest purposes of our republic — procedural fairness and equal protection of the laws — in the adjudication of claims to restitution of objects of art, things of beauty stolen by the Nazis as part and parcel of a deeper desire and a thicker conspiracy to rob Jews of their very lives.”

During congressional hearings on the bill that became the HEAR Act, Agnes Peresztegi, president of the Commission for Art Recovery, testified: “Cases related to Holocaust looted art should only be adjudicated on the merits.”

The commission’s founder, Ronald Lauder, agreed, testifying that the resolution of these claims must be “based on the merits of each case and not on procedural technicalities or the capacity of one party to outspend, or outwait, the other.”

The AJC also contended that the court in the 2010 case “turned New York policy on its head when it ruled that the burden remained on the Grünbaum heirs to prove duress, and imposed an onerous burden on them to have searched for property in the aftermath of the Shoah.” It noted that in this case, the heirs filed suit on Nov. 17, 2015 — the very next business day after they had actual knowledge of the whereabouts of the disputed artworks.

In addition, the AJC observed that the case of Maria Altmann’s quest for her family’s painting, Gustav Klimpt’s “Adele Bloch-Bauer I” (which was made into the hit movie “Woman in Gold” starring Helen Mirren), was one of the few that resulted in the restitution of stolen property to the heirs of victims of Nazi persecution.

The AJC argued also that the court in the 2010 case “decided only the case before it” and did not bar the heirs from pressing claims to the other Schiele paintings.

“It is completely unreasonable,” it said “to allege that the claims as to ‘Woman in Black Pinafore’ or ‘Woman Hiding Her Face’ could have and should have been asserted previously.”