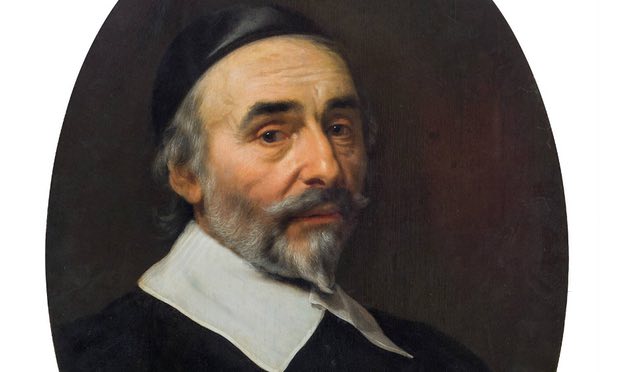 Detail from the Portrait of a Man by Van der Helst, which is to be auctioned in Vienna on 26 April.

A 17th-century Dutch old master painting stolen by the Nazis is to be auctioned in Vienna next week, provoking outrage from the heirs of the owners from whom it was looted who have accused the auction house of moral bankruptcy.

Auctioneers at Im Kinsky have not shied away from describing the painting, Bartholomeus van der Helst’s Portrait of a Man, as disputed stolen art in the sales catalogue. They state that its current owner bought it in good faith from a German art dealer in 2004 and under Austrian law she has the right to sell it.

Portrait of a Man was one of hundreds of works looted in 1943 from the Schloss family, whose huge collection of Flemish and Dutch old masters was amassed by Adolphe Schloss, a Jewish-German industrialist who lived in France.

The portrait was among thousands of works singled out for Adolf Hitler’s planned Führermuseum in Linz. It was stolen again in 1945 from an Allied collecting point in Munich by thieves who took advantage of the chaos at the end of the war.

Antoine Comte, a lawyer for the Schloss heirs, said all the family wanted was the return of the painting. “We want the painting back, with the admission that it was looted art,” he said.

“We will not accept, as has been suggested, that we buy it back ourselves or share the proceeds of the sale with the owner. Neither do we accept the owner could not have known it was looted. For years it has shown up on every database of stolen assets as well as on the Interpol register.

“As long as we don’t get the painting back that was unlawfully taken from the family, this amounts to an appalling continuation of nazism and the crimes of nazism,” he added. “The Austrians fall back on their own legal system to say they are in the right, but they don’t give a damn about the moral aspect of this.”

Intervention by the French government a year ago prompted Im Kinsky to withdraw the work from a previous auction. But Comte said all legal channels in Austria to stop the sale again had now been exhausted.

“The only satisfaction we have is knowing that it’s unlikely to be able to leave Austria,” Comte said. “It will not get very far.”

Ernst Ploil, one of the chief executives of Im Kinsky and a leading Austrian art collector, admitted he was putting the artwork up for sale despite resistance by the heirs and was able to do so because the law was on his side. He insisted, however, that the main reason for going ahead with the auction was to highlight what he referred to as huge and damaging discrepancies in laws regarding the acquisition of stolen art by private parties.

“Right now what we have is a legal mess, a clash of national laws across Europe leaves private art collectors exposed and I wanted to demonstrate that,” he said.

In France, artworks that are revealed to be stolen cannot be legally sold on the art market, but in Austria and Germany anyone who buys stolen artworks in good faith is allowed to maintain ownership or good title to them.

Portrait of a Man, lot number 476 in Im Kinsky’s old master auction on 26 April, with an estimated price of between €15,000 and €30,000 (£12,500 to £25,000) is a 65cm by 49cm oil-on-panel work that is thought to be a portrait of Damnas Jansz. Pesser, a Dutch merchant. It was first withdrawn from auction a year ago at the French government’s request in order that the owner and the Schloss heirs could reach what the culture ministry referred to as a “fair and just solution” through a process of mediation.

Ploil said he agreed to the withdrawal to establish legal clarity and to negotiate with the Schloss heirs. According to him, the owner offered to give the heirs half the proceeds of the sale, but the family insisted they would accept nothing less than the return of the painting. “It is a position I cannot understand,” Ploil said.

So far, 162 works from the 333 that were stolen from the Schloss family – from what has been described by the French foreign ministry as “the last great Flemish and Dutch art collection to be assembled in the 19th century in France” – have been restored to the heirs from museums and private collections around the world. Seven of the outstanding 171 works, including Portrait of a Man, remain the subject of legal claims.

The fact that in Austria art dealers are not obliged to check the provenance of artworks, and German art dealers have only had to do so since a law change last year, means that tens of thousands of looted artworks remain available on the free market.

“It is preposterous that works which it is known were stolen by the Nazis are still on the free market, when the absolute priority should be to return them to their owners,” said Stephan Klingen of the Central Institute for Art History in Munich, which is leading research into the theft of the Führermuseum paintings in 1945. He called the Im Kinsky auction “scandalous”.

Olga Kronsteiner, a leading art market journalist in Vienna who has followed the Schloss case closely, said: “The flaws here lie both with lawmakers and art dealers, rarely with the buyers. Until they are resolved there will continue to be many similarly unresolved cases.”

The controversy comes at a time when research into the provenance of artworks and artefacts is active as never before amid a large number of unresolved, often high-profile cases. Most prominent was the discovery four years ago of a huge collection of artworks stolen by the Nazis that was found in the possession of the reclusive Munich collector Cornelius Gurlitt, who had inherited them from his art dealer father.

Last month the German government launched an unprecedented partnership with the descendants of the Berlin publisher Rudolf Mosse to recover his vast collection of looted artefacts.

The most prominent art restitution case in Austria involved Gustav Klimt’s 1907 golden portrait of his muse, called Adele Bloch-Bauer I, which was seized from the family just before the start of the second world war. For years, Bloch-Bauer’s niece Maria Altmann fought the Austrian government’s refusal to return it to her family. Once it was returned she sold it for £73m, donating much of the proceeds to charity.