April
The Art Newspaper 19 May 2017
By Catherine Hickley 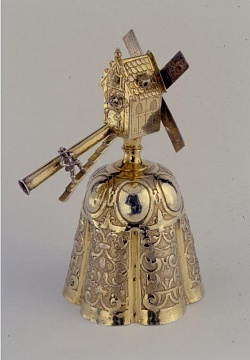 Dr Oetker, a family-owned German manufacturer of food products, says it has reached an agreement to compensate the heirs of Emma Budge for a 17th-century silver cup in the shape of a windmill that was sold by the Nazis in 1937 and wound up in the company’s art collection.

Dr. Oetker acquired the silver cup for the company collection from a Swiss dealer in March 2009, after it was on display at the Tefaf fair in Maastricht. In 2011, the lawyer for Budge’s heirs published an image of the silver cup on a database of Nazi-looted art. A provenance researcher employed by Dr. Oetker found the listing and the company contacted Lothar Fremy, the heirs’ lawyer.

Emma and Henry Budge were wealthy Jewish art collectors who lived in Hamburg in a villa on the Alster Lake. After Emma Budge died a widow, their collection was shipped to Berlin, where it was sold at the auction house Paul Graupe in 1937. The proceeds were paid into an account blocked by the Nazis and her heirs never received the money.

Fremy said Dr. Oetker “deserves great recognition” and that the heirs were “extremely grateful for the responsible way the collection dealt with this case.” The heirs said they preferred financial compensation over restitution of the silver cup.

The food manufacturer announced last year that it had hired a provenance researcher to investigate its art collection, which encompasses silver and gold antiques, porcelain and several hundred paintings. The research began in early 2015 and is expected to take at least until the end of 2017.

The silver cup is the fourth item in less than a year that Dr. Oetker has restituted or reached a settlement on with the heirs. In January, it announced the return of a portrait by Anthony van Dyck acquired by Hermann Göring to the heir of Jacques Goudstikker, a Jewish art dealer forced to flee the Netherlands when the Nazis invaded.