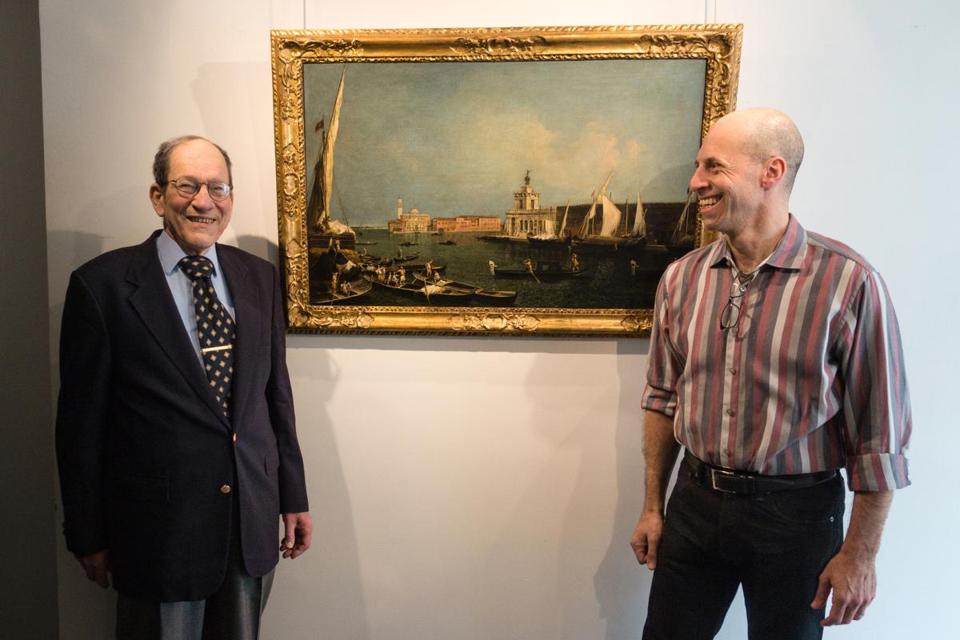 Stephen (left) and Andrew Tauber recently traveled to Paris to view the Marieschi painting for the first time in advance of the Sotheby’s sale.

A Massachusetts-based case involving a painting stolen by the Nazis has been resolved after a decades-long effort, underscoring the steep odds many Holocaust survivors and their heirs face as they try to reclaim their stolen property.

For nearly 80 years, the Graf family, Viennese Jews who fled Austria to escape the Nazis, has sought the return of “La Punta della Dogana e san Giorgio Maggiore,” a sweeping panorama of Venice by the 18th-century artist Michele Marieschi.

Stolen by the Germans in 1940, the painting remained concealed in an Englishman’s private collection for decades as Heinrich Graf, and later his Massachusetts daughters, pursued the work. They wrote countless letters to authorities, seeking legal redress and asking third-party intermediaries for help.

Now the family has reached an agreement — if not satisfaction — with a trust that controlled the artwork. The painting is scheduled to be auctioned in London this July by Sotheby’s, which expects it to fetch up to $900,000. The trust has agreed to split the proceeds with the family.

“We did the best we could under the circumstances, and here we are,” said Graf’s son-in-law Stephen Tauber of Lexington. “They wanted to sell it on the open market, and for that they needed clear title. With this agreement, it can be sold with clear title.”

Tauber, who recently traveled to the Sotheby’s Paris offices with his son to view the painting for the first time, said the agreement was far from perfect.

“In a certain sense it rankles,” said Tauber, 85. “An object, known to be stolen, was not returned to the heirs of the original owners.”

Despite nonbinding guidelines endorsed by scores of countries to ease the recovery of Nazi-looted art, many such claims are thwarted by institutional stonewalling, spotty records, and bureaucratic delay.

“It’s easier when an object is in a museum or state-owned collection,” said Christopher Marinello, chief executive of Art Recovery International. “They have to abide by certain guidelines.”

But matters are different in the private sector, where a hushed culture of closely guarded sales, blind trusts, and dealer discretion often shield collectors from public scrutiny. Even good-faith buyers have scant incentive to go public when they discover a looted work in their own collection. And in the unlikely event that Holocaust survivors or their heirs do learn the whereabouts of stolen property, it can be daunting to press restitution claims across international borders.

“All of these conventions don’t apply to private individuals or dealers,” said Marinello, who negotiated the Marieschi settlement. “Countries like France, Monaco, Italy, Germany — they protect their good-faith purchasers, and it becomes a lot more difficult for a family of Holocaust victims to get any kind of relief.”

Such was the case with the Grafs, who placed their belongings in storage after they fled Vienna in 1938 following the German annexation of Austria. The family later settled in the United States, where Heinrich Graf began a dogged letter-writing campaign to government agencies and private organizations to recover the Marieschi.

But it was too late: The Nazis had looted the Grafs’ storage facility, later selling the family’s art “in an auction limited to the Nazi bigwigs,” Tauber said.

In 1946, Graf reported the painting stolen to the Allied armies’ Monuments, Fine Arts, and Archives program, better known as the Monuments Men. After his death in 1976, his twin daughters, Eva Glaser and Erika Tauber, took up the cause.

“I always hoped they would get it back before they passed away,” said Eva Glaser, 84, whose mother, Anna Maria, died in 1986.

Working with the Art Loss Register, the sisters placed an image of the painting in The Art Newspaper in 1998 with the notice: “Buyer Beware: Holocaust Losses.”

“It was now stated publicly that it was a stolen painting, which meant it was unsalable on the open market,” said Stephen Tauber.

The item caught the attention of Charles Beddington, a former Christie’s employee who believed he’d seen the work a decade earlier at a client’s home in France.

Beddington, a recognized Marieschi authority, contacted the Art Loss Register, but Christie’s barred him from revealing the collector’s identity, citing a confidentiality agreement.

“My hands were rather tied,” Beddington said recently from London. Instead, Christie’s contacted the collector privately about the claim. And when Beddington called him on the family’s behalf, Tauber related, “He hung up . . . It became then the task to shake loose where he had seen the painting.”

The episode proved embarrassing for the auction house, which the family accused of blocking its quest to retrieve its stolen property. At the time, Christie’s said it could break its confidentiality agreement and identify the collector if under British court order, as “such information as Christie’s has is solely located in the United Kingdom.”

After a Viennese Jewish organization took up the cause in the British courts, the family finally learned the mysterious collector’s identity: Bryan Jenks, a wealthy Englishman who retired to Monaco. 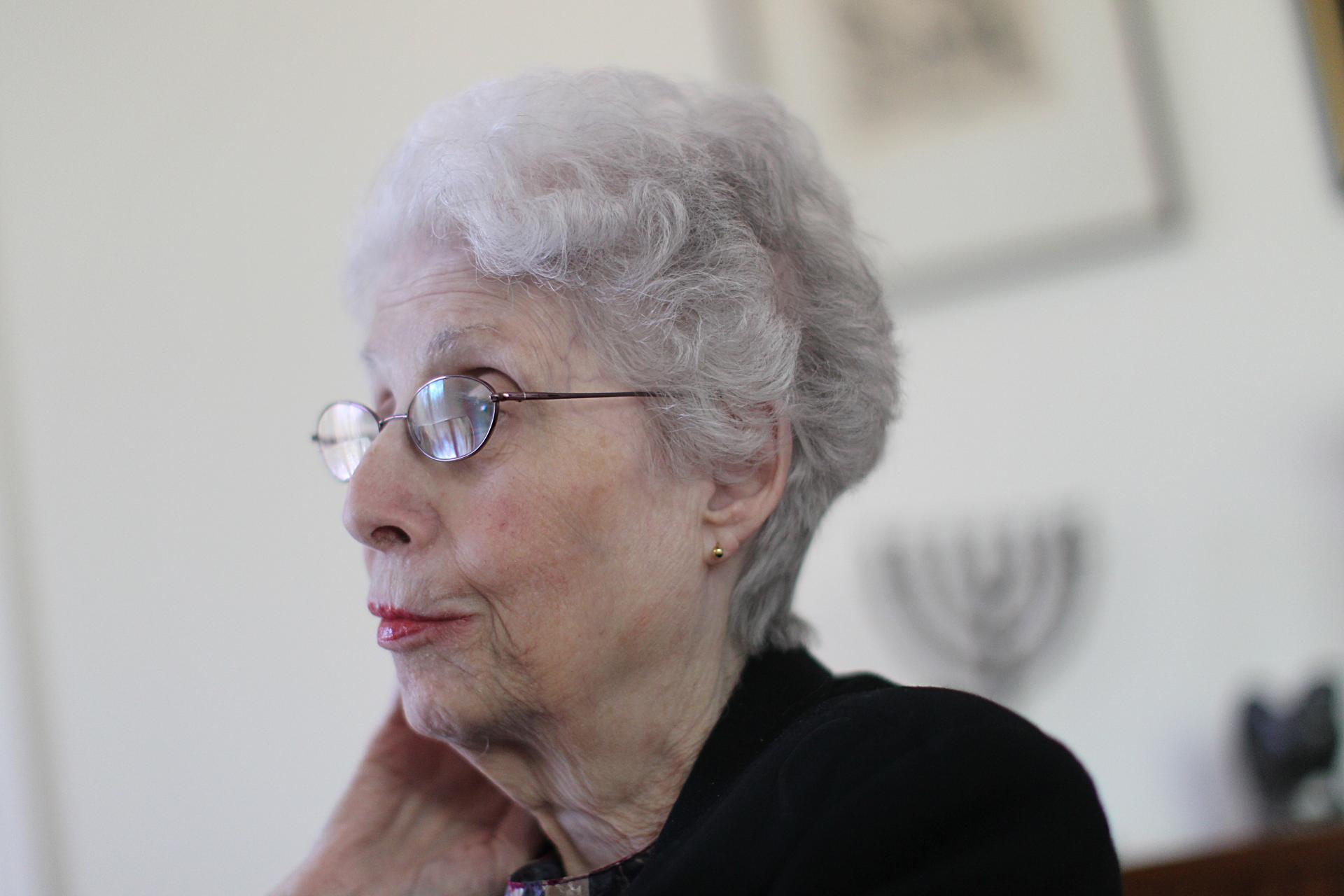 “I always hoped they would get it back before they passed away,” said Eva Glaser, 84.

But by then, Tauber said, the family was exhausted by the search and intimidated by the prospect of pleading its case in the Monaco courts.

“We thought it would be very difficult to prevail,” said Tauber.

Sotheby’s ownership records indicate the painting’s whereabouts remained unknown between 1940 and 1952, when a dealer bought it. According to Sotheby’s, “the current possessor” was unaware of the painting’s history when he bought it in 1953 and has had “unbroken enjoyment of the work for more than 60 years.”

After Jenks’s death, the painting passed into the control of a trust, which contacted Marinello via a third party.

“[They] said the current possessor would like to sell the painting, but there’s this obvious issue of Nazi looting,” said Marinello. “They easily could have sold it privately, and one would never have known . . . But they felt that the time was right to take this on and deal with it.”

After a 15-year stalemate, the family was willing to negotiate.

For Stephen Tauber, whose wife, Erika, died in 2012, keeping up the fight came down to questions of time and resources.

“How much time do we have, and how do we want to spend what we have left?” he asked. “Even though the result isn’t satisfactory, it’s acceptable. I think the distinction is significant.”