Nazis Stole His Renoir. His Granddaughter Finally Got It Back. 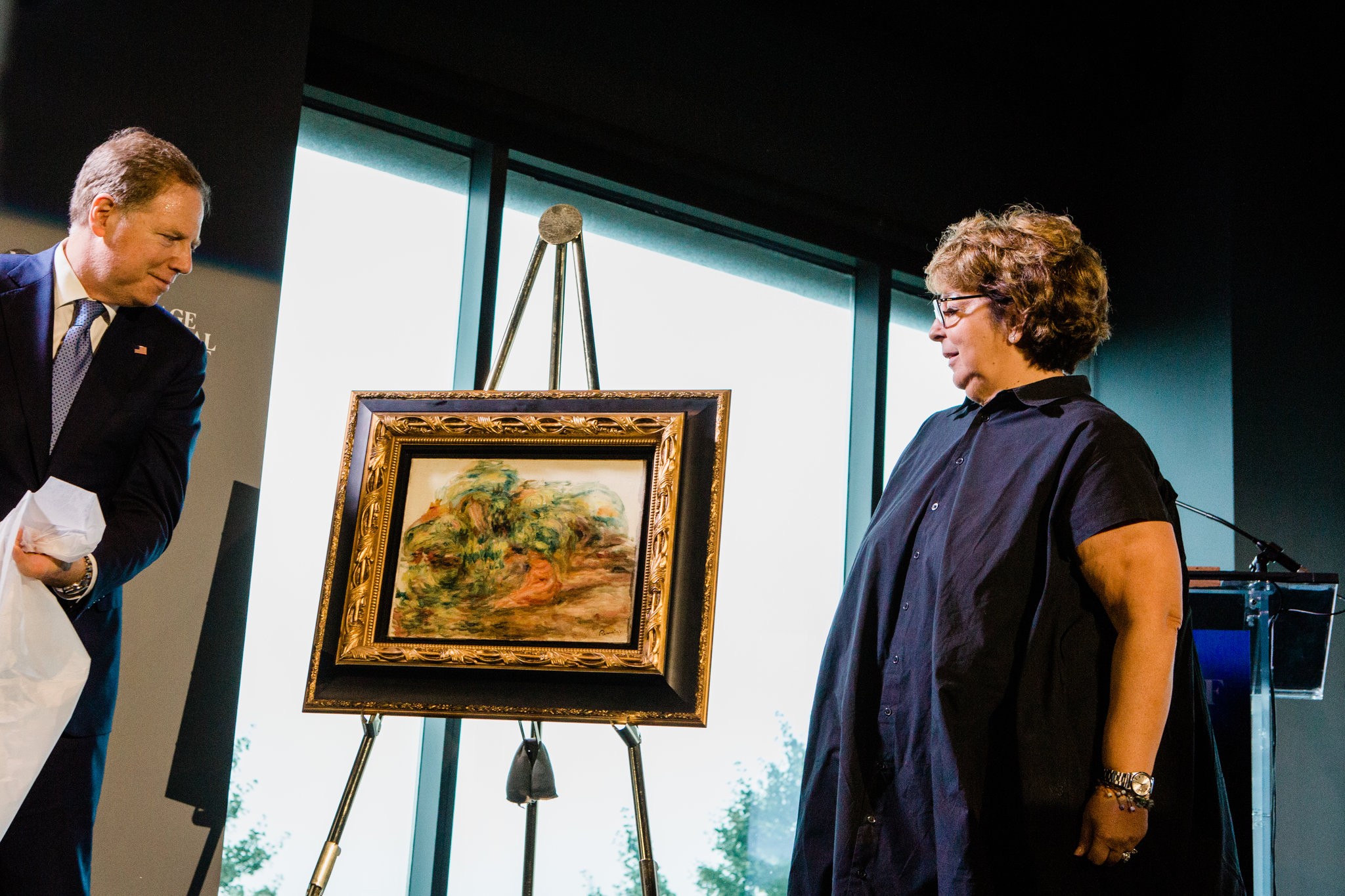 Geoffrey S. Berman, the United States attorney in Manhattan, and Sylvie Sulitzer unveiling the Renoir on Wednesday at the Museum of Jewish Heritage in Manhattan.

Each time, the truth about the 12-by-15-inch Impressionist painting went unmentioned: The Nazis had stolen it from a bank vault in Paris.

The canvas, painted by Pierre-Auguste Renoir in the last year of his life, had belonged to Alfred Weinberger, a Parisian collector and dealer who was Jewish. It was one of several Renoirs that Mr. Weinberger had owned.

Mr. Weinberger’s granddaughter and only heir, Sylvie Sulitzer, had never seen it — until Wednesday, when the painting, “Two Women in a Garden,” became the centerpiece of an emotional ceremony at the Museum of Jewish Heritage in Lower Manhattan.

“My family left Paris to escape the Gestapo,” Ms. Sulitzer said. “I’m very thankful to be able to show my beloved family, wherever they are, that after all they’ve been through, there is justice.”

Ms. Sulitzer, who is 59 and lives about 15 miles from Marseille in the south of France, got her first look surrounded by law enforcement officials who had worked to see that the painting was turned over to her. Among the officials were William F. Sweeney Jr., the head of the F.B.I.’s New York office, and Geoffrey S. Berman, the United States attorney in Manhattan, who said before the ceremony that the outcome “brings some measure of justice to the Weinberger family and to Madame Sulitzer.”

“It’s been three-quarters of a century since it was looted,” Mr. Berman said, “but it’s very important to us to bring whatever sense of justice we can.”

The Nazis plundered France during World War II; by some accounts, they seized more than one-third of all privately owned art in the country. Much of the pilfered art, including “Two Women in the Garden,” was taken to the Jeu de Paume museum in Paris, which the Germans had turned into a depository. 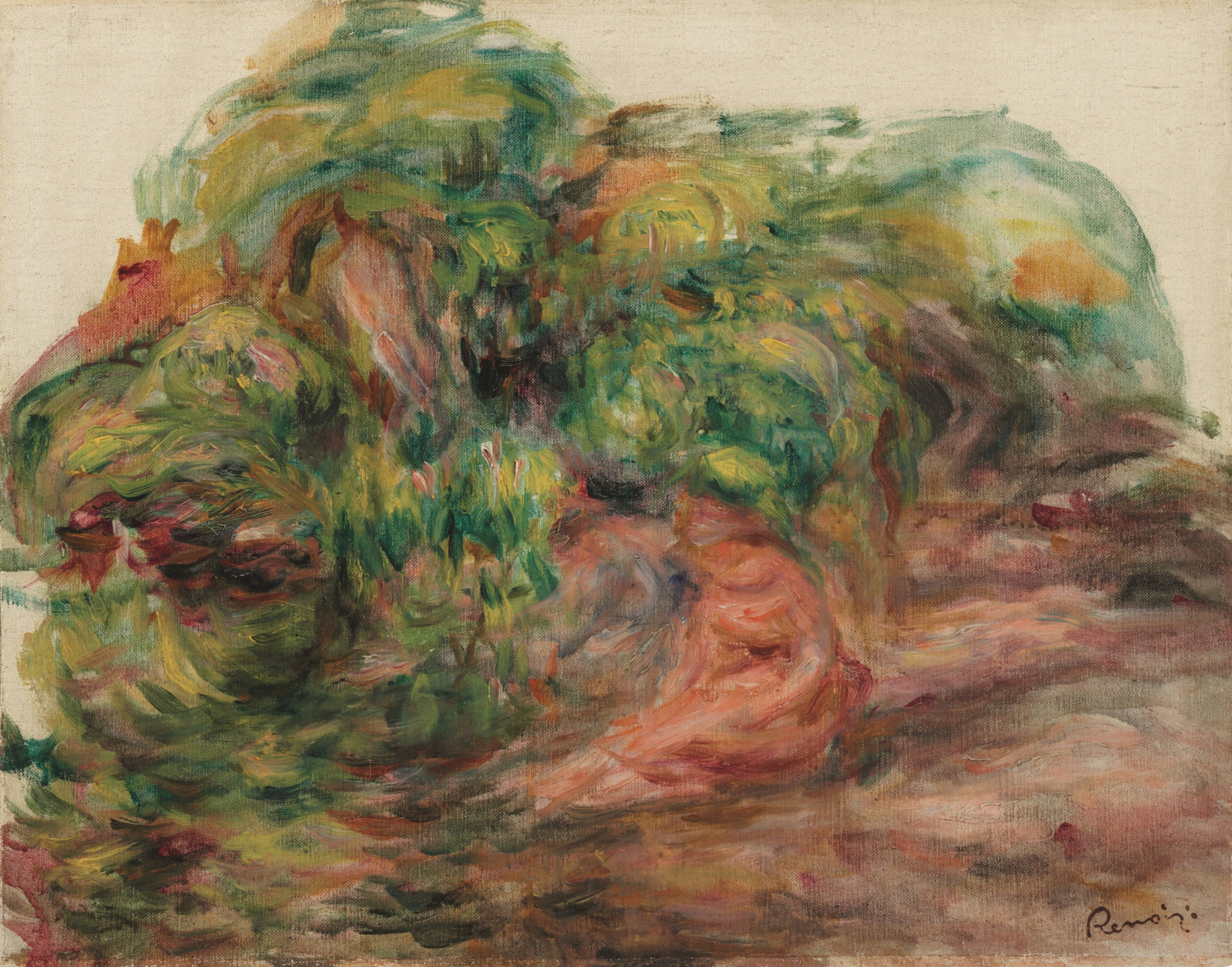 “Two Women in a Garden,” painted in 1919 by Pierre-Auguste Renoir, was confiscated by the Nazis in Paris in 1941.

Ms. Sulitzer, who lived with her grandparents when she was a child, said she knew nothing about the painting until she was contacted several years ago by a German lawyer who specializes in reclaiming valuables that were seized by the Nazis. Ms. Sulitzer said her grandfather had not talked about the Renoir or the Nazi occupation.

“As far as I can remember,” she said, “nobody ever spoke about the war.”

On Wednesday, she and Mr. Berman lifted a white covering to reveal the painting. She looked at it for a long moment.

But she also said she might have to sell it.

Ms. Sulitzer said she had received compensation from the French government several years ago. Under the rules of the French restitution program, when an item is returned to an owner who has been compensated for its loss, the owner must reimburse the government. She would not say how much money was involved, except to say, “It’s a huge amount of money for me.”

Ms. Sulitzer said the painting’s return was “sort of a reward” for her grandfather’s efforts to track it down “and all the sadness” he went through. “I think he would be very, very happy,” she said, adding that she wished he could have attended the ceremony “instead of me.”

Like many works of art plundered by the Nazis, the painting has a painful and circuitous history. “From the standpoint of the travels of this painting, it moved around the world in a way that few other pieces that you’d have been on the lookout for restitution did,” Michael Glickman, the president of the museum, said before the ceremony. “Certainly over the last five years, this has been an effort to reclaim the painting and reconnect it with Mrs. Sulitzer.”

But the effort began long before 2013, when Ms. Sulitzer learned that the painting had been listed for sale at Christie’s in New York. The officials said on Wednesday that her grandfather had tried repeatedly over the years to get the painting back, filing a claim for “Two Women” with French restitution authorities in 1947 and with their German counterparts in 1958.

Mr. Weinberger died in 1977, a month before he would have turned 90, without seeing the painting again. He and his wife, Marie, had fled to the French Alps as the Nazis tightened their hold on Paris during the war. Ms. Sulitzer said the Nazis pressed him, as an art expert, to authenticate the art they had plundered. “Of course, it was impossible for him to accept” such an assignment, she said, and he became a maquisard, as rural anti-Nazi resistance fighters were known.

But first he stored 13 prized canvases in a bank vault in Paris, including “Two Women,” the other Renoirs and one by the French Romantic painter Eugene Delacroix, who is the subject of a retrospective at the Metropolitan Museum of Art that is scheduled to open next week. The Nazis, who seized hundreds of thousands of pieces of art during World War II, confiscated Mr. Weinberger’s paintings in December 1941. The Nazi unit that raided the vault kept meticulous records of the works it took, even photographing them, the authorities at the ceremony said.

Mr. Weinberger reclaimed six of his paintings after the war, but the Renoirs were not among them. Many Nazi-pilfered artworks were shipped to Germany, but the exact whereabouts of “Two Women in a Garden” during the war is uncertain. It was eventually sent to a gallery in London and then surfaced in 1975 in a Sotheby’s sale in Johannesburg. 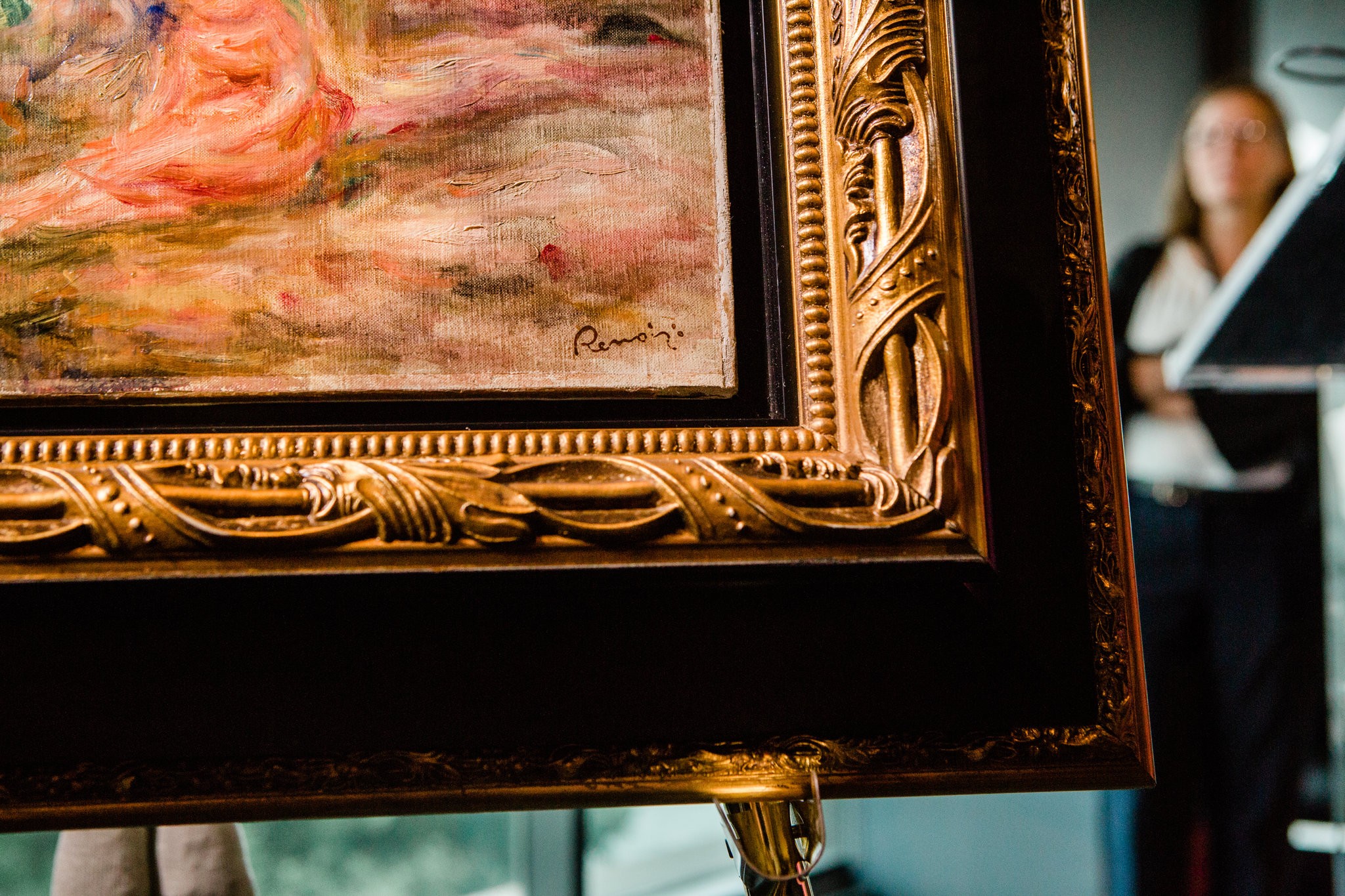 The painting was returned to Ms. Sulitzer, whose grandfather had placed it in a bank vault in Paris.

Sotheby’s auctioned it again in London two years later. Auction-house executives familiar with the case said it was offered for sale at Christie’s in December 1996, when no one bought it, and in June 1997. It went on the block again at an auction house in Zurich in 1999.

Its next appearance was at Sotheby’s in New York in 2005, with a presale estimate of $150,000 to $200,000. It sold for $180,000. Officials said the buyer was Park West Gallery, which runs art galleries on more than 100 cruise ships and organizes auctions onboard, entertaining customers who are not playing the slots or taking in a show.

“Everything about that transaction felt, smelled and sounded normal,” said Paul Schweip, a lawyer for Park West, which put it on the block again in 2009, with the same estimated value. But it did not sell until 2012, when Park West sold it — not on a cruise ship, Mr. Schweip said, but at Park West’s home base in Southfield, Mich. The price was $390,000.

The buyer, who was not identified, took the painting to Christie’s in 2013, and it was listed for sale. The provenance then, as in the earlier Sotheby’s sales, was traced to a gallery in London with no mention of Mr. Weinberger or the Nazi confiscation.

“Christie’s advertised the sale,” Mr. Berman said. Ms. Sulitzer heard about the sale, and her lawyer called Christie’s, which withdrew it and called the Federal Bureau of Investigation, which began its own inquiry.

Christie’s and Sotheby’s said they do everything they can to see that artworks taken during World War II are not offered for sale. Lucian Simmons, a vice chairman of Sotheby’s who oversees its restitution department, said its researchers would have checked the Art Loss Register, a private company that tracks stolen artworks; a German government website; and postwar lists compiled by the allies. He said they would have paid close attention to a list from the French government, “because it’s the kind of artwork a typical French collector would have had.”

“Obviously, it didn’t come up in any of those checks, which is why it proceeded and was put in a sale,” he said.

He also noted that one important database for identifying looted artworks did not go online until 2010, the year after Sotheby’s put it on the block but failed to sell it.

Monica Dugot, Mr. Simmons’s counterpart at Christie’s, said that Christie’s had conducted similar checks but that Mr. Weinberger’s name had not appeared in any of the records that were available at the time. “Without the Weinberger name as a trigger,” she said, “it was hard to make a match.”

Mr. Schweip, the lawyer for Park West, said it had refunded the $390,000 to the client who bought the painting soon after questions were raised about the painting’s provenance.