Painting stolen by Nazis in WWII to be returned to Florence

An 18th century Dutch painting of a vase of flowers will be returned to the Uffizi gallery in Italy after it was stolen by retreating Wehrmacht soldiers. The German family who acquired it tried to sell it back. 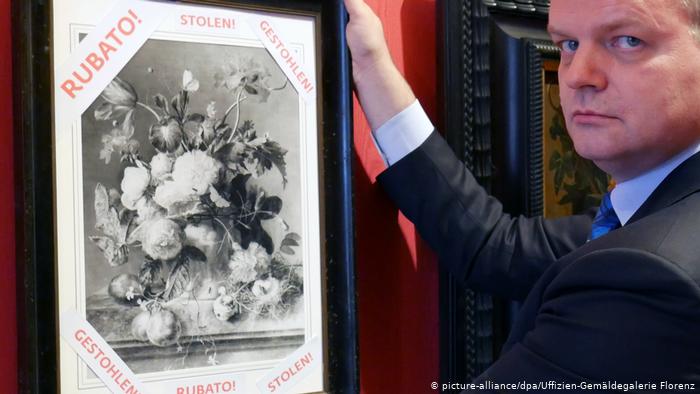 The German government has helped facilitate the return of an 18th century Dutch painting that was stolen from the Uffizi gallery in Florence by German soldiers in 1943.

"Vaso di Fiori" (Vase of Flowers) by Jan van Huysum will be returned to the Palazzo Pitti, the palace where the Uffizi gallery is housed, in a special ceremony to be attended by German Foreign Minister Heiko Maas and his Italian counterpart Enzo Moavero.

In a brief statement released on Saturday, the German Foreign Ministry said that "tight and trusting" cooperation between the two ministries had ensured that the painting could be returned to its original spot. The painting was first bought by Grand Duke Leopold II of Tuscany and hung in the palace in 1824.

he gallery's German director, Eike Schmidt, has been publicly lobbying for the 47cm x 35cm (18 x 14 inch) painting to be returned to the gallery since January, when he hung a framed poster of the image on the gallery's wall with the word "stolen" in three languages taped across it.

The German Wehrmacht occupied northern Italy along with fascist forces after Italy capitulated to Allies in September, 1943. The Nazi soldiers took the "Vaso di Fiori" during their retreat and brought it back to Germany, where it has been in the possession of an unnamed family ever since.

Schmidt told The Guardian newspaper in January that the family had made an "outrageous offer" to sell the painting back, which had prompted Italian prosecutors to open an investigation.

"Because of this affair, the wounds of the Second World War and Nazi terror are not yet healed," Schmidt said at the time. "Germany has a moral duty to return the works to our museum and I hope this will be done as soon as possible, along with every other work of art looted by the Nazi army."