Where is the portrait of Dr Gachet? The mysterious disappearance of Van Gogh's most expensive painting

Frankfurt's Städel Museum put a detective journalist on the case 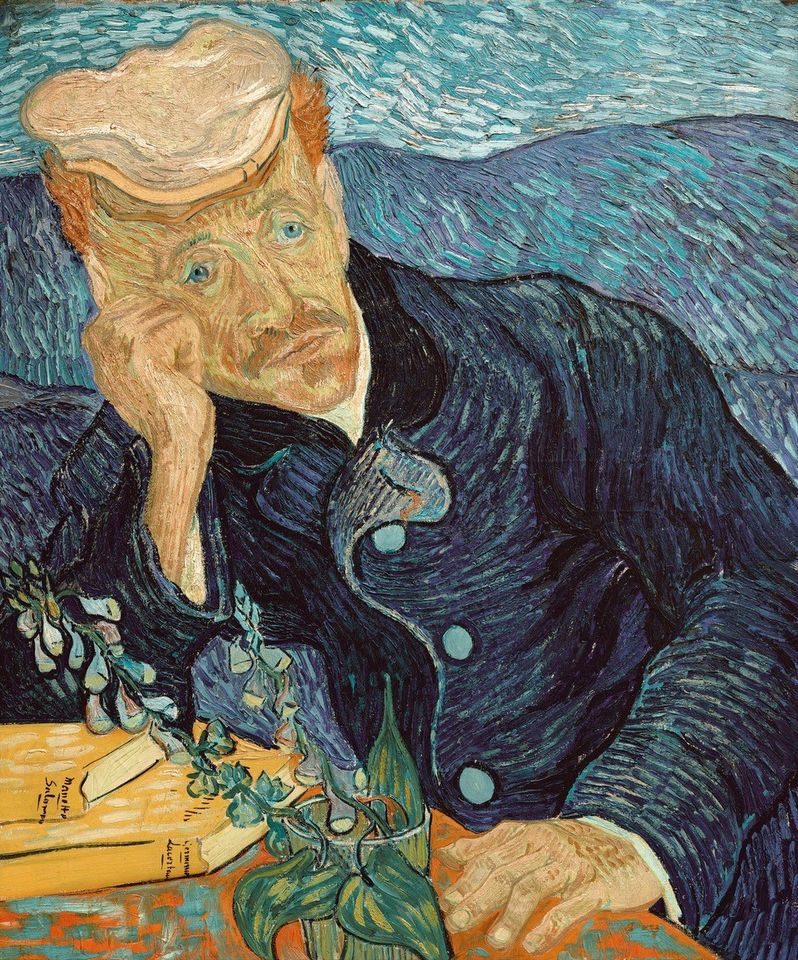 Vincent van Gogh’s Portrait of Dr Gachet disappeared after it was sold at Christie’s in 1990, when it fetched $82.5m, then the highest price for any painting at auction. The buyer was a Japanese businessman, who later said he would have the picture burnt with his body, but this didn’t happen when he died—and the Van Gogh quietly returned to Europe. 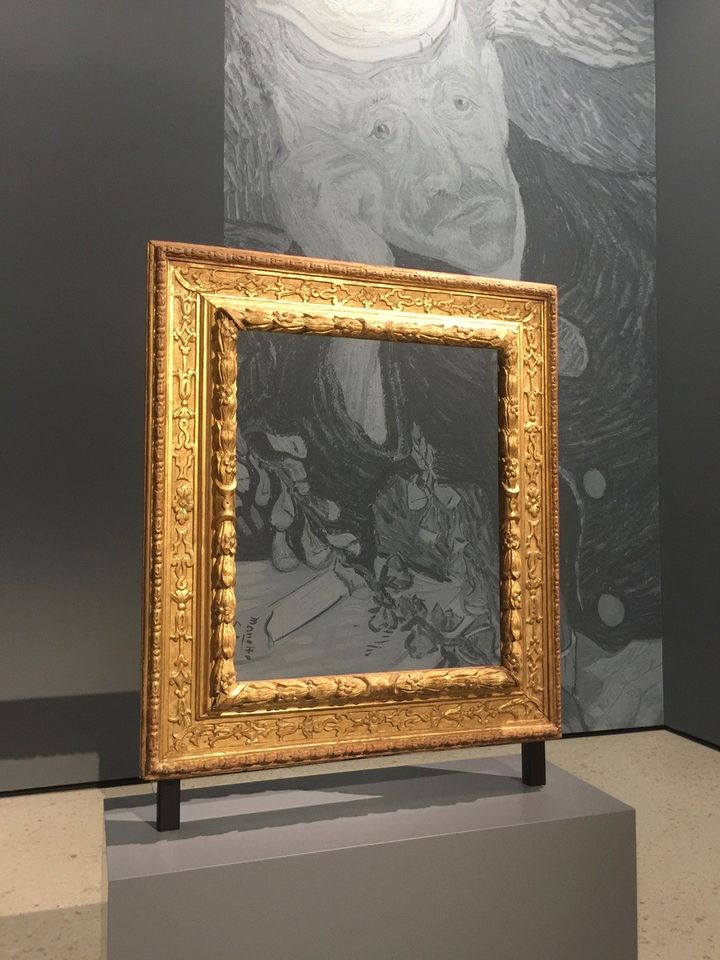 The empty frame of Vincent van Gogh’s Portrait of Dr Gachet, used by the Städel Museum, Frankfurt, in 1911-37 and displayed in the current exhibition Photo: Martin Bailey

The curators of the current Van Gogh exhibition at the Städel Museum in Frankfurt went to enormous efforts to track down the missing Portrait of Dr Gachet, since it had been in their gallery until it was seized by the Nazis. The show focuses on Germany’s love for the artist and the painting would have been its centrepiece, because the picture was one of the first to be acquired by a German museum. The curators failed to borrow the picture and so ended up displaying its empty frame, a poignant reminder that the picture had been sold off by Hitler’s regime as “degenerate”. So what is the story—and where is the portrait now?

A few weeks before his death in 1890, Van Gogh painted two portraits of Paul Gachet, the doctor who kept a friendly eye on the artist while he was working in the village of Auvers-sur-Oise, north of Paris. Dr Gachet also cared for Van Gogh during his final hours after he had shot himself in the nearby wheatfields. The first version of the portrait is the one that was in Frankfurt and has gone missing. The other was given to Dr Gachet and is now at the Musée d’Orsay in Paris. 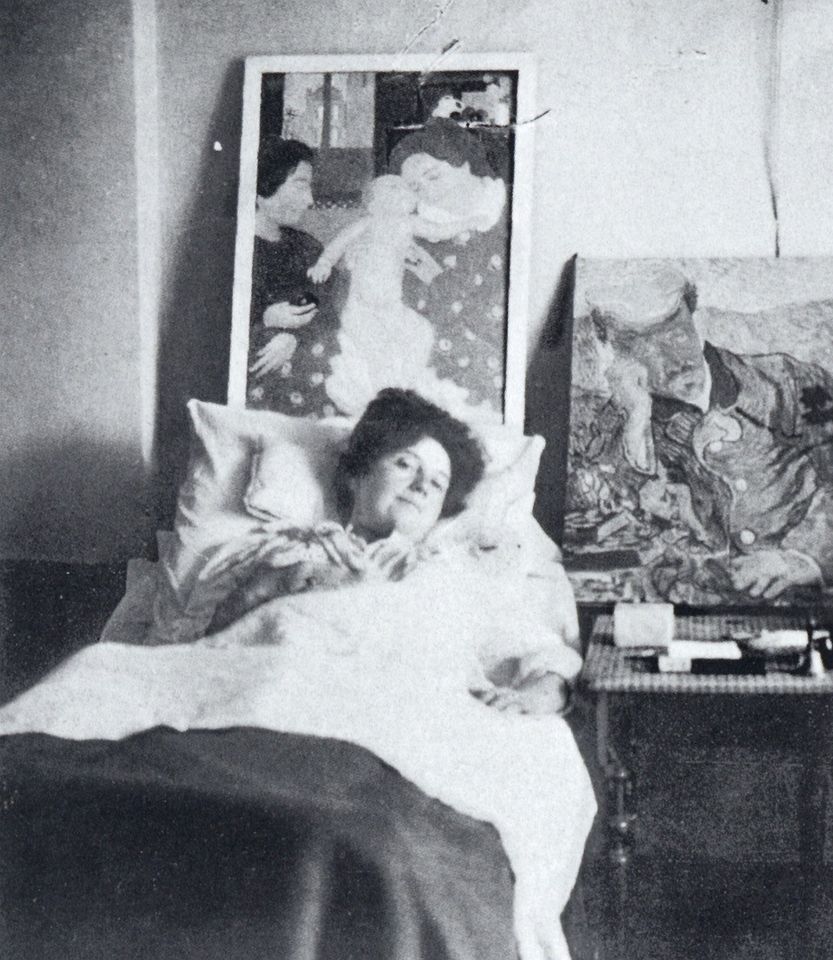 Alice Faber with her Portrait of Dr Gachet, by an anonymous photographer, Copenhagen, 1897

The first version, the one now missing, has an extraordinary history. It appears in the earliest known photograph of a Van Gogh collector with their work, taken in 1897. In a bizarre setting, the unframed portrait of the doctor lies propped up beside the bed of its owner, the pregnant Copenhagen-based artist Alice Ruben Faber (along with a Maurice Denis painting of the Madonna and Child). 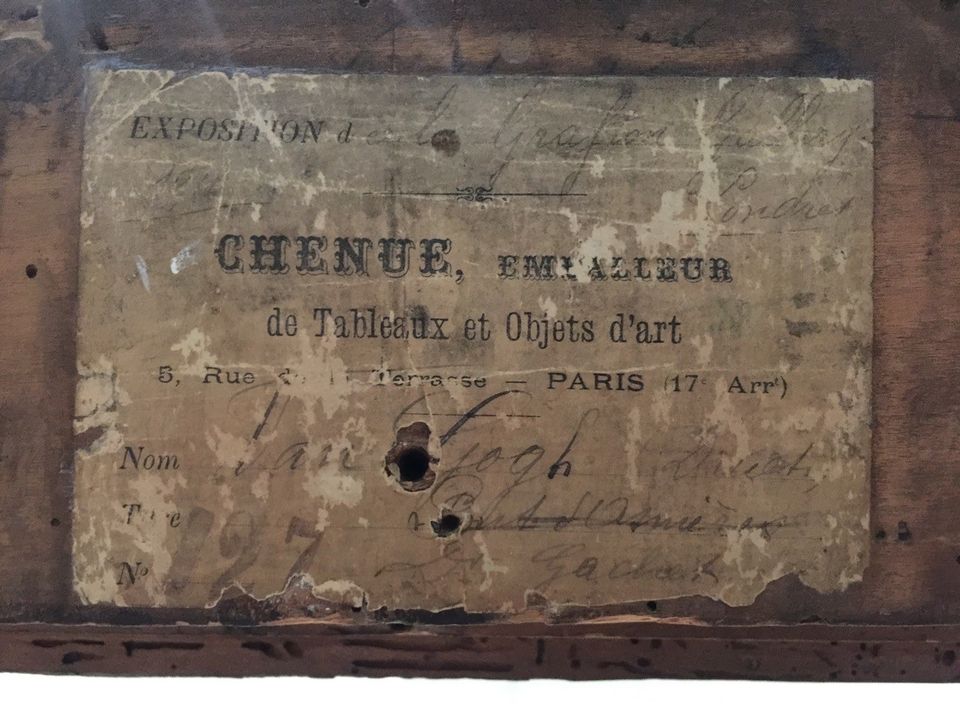 In 1910 the Portrait of Dr Gachet was lent to the now famed Post-Impressionist Exhibition in London. Last month, while inspecting the frame, I spotted a battered label on the reverse, with a faded handwritten text in the upper-right corner: “la Grafton Gallery/Londres”. When the painting was dispatched on loan from Paris, the London curator Roger Fry had not yet decided on a title for his show and therefore only the venue is written on the label. At the last minute, Fry opted for “The Post-Impressionists”—inventing the lasting name for this key artistic movement.

The discovery of the label shows that the Portrait of Dr Gachet was already by 1910 in a gilded frame, 20 years after the death of the artist who could not sell his work. This ornate presentation would have annoyed Van Gogh, who liked his paintings to be shown in plain wooden frames.

In 1911 the painting was donated to the Städel Museum. Between the wars it served as a great inspiration for modern German artists, particularly the Expressionists. But after the Nazis came to power they declared the work to be “degenerate”, confiscating it in December 1937, primarily to make money rather than for their distorted ideological reasons.

What has only just emerged is that the painting was shipped to London in 1939 and was due to be shown in a major Van Gogh exhibition which never happened because of the outbreak of war. The Cassirer gallery in London was planning the show, and had arranged to borrow the Portrait of Dr Gachet. Walter Feilchenfeldt, the Zurich-based Van Gogh scholar whose father ran the Cassirer gallery in Amsterdam and London, has just found these details in the family records.

Kramarsky was keen for the Portrait of Dr Gachet to go to London, writing on 11 August 1939 that he was “very much afraid that there would be war”. The painting was sent to London the following day, but the declaration of war on 3 September scuppered the Cassirer show.

The Portrait of Dr Gachet was then shipped from London to New York. Kramarsky died in 1961 and his widow auctioned the painting at Christie’s in 1990. Nearly 30 years later, the $82.5m that it sold for still remains the record price for a Van Gogh work at auction.

The buyer was the Japanese businessman Ryoei Saito, who once said that he wanted the Portrait of Dr Gachet to be burnt with his body, but fortunately this did not happen on his death in 1996. It was just his morbid sense of humour. Two years later the painting was sold privately to the Austrian investment manager Wolfgang Flöttl and after he faced financial problems a few years ago, it passed to the present owner.

But who is now the mystery collector? For its current exhibition, Making Van Gogh: a German Love Story, the Städel commissioned the German journalist Johannes Nichelmann to investigate and prepare a podcast on his findings. Nichelmann spoke with the dealer David Nash, who handled the private sale to Flöttl. The subsequent sale after Flöttl was made by Sotheby’s. Nash told Nichelmann: “My understanding is that they [Sotheby’s] sold it to an Italian collector who already owns four or five other major Van Gogh paintings and who is living in Switzerland.” Nash added that “this Italian collector is dead” and “the family is working out what to do with it”.

Stefan Koldehoff, a Cologne-based Van Gogh specialist and journalist, says in an article in the October issue of the German magazine Kunst, that the collector was believed to reside in Lugano and that Sotheby’s discreetly refers to him internally as “The Lugano Man”.

So why is the painting not being lent by its Italian/Swiss owner to the Städel exhibition? Our inquiries suggest there are several problems. The family is “very discreet”, according to the Städel’s curator, Alexander Eiling. There may also be family issues revolving around the late collector’s estate.

The main reason may be a possible Nazi-era claim. When the Portrait of Dr Gachet was sold at Christie’s in 1990 the Koenigs name did not appear in the published provenance in the catalogue, although it now appears that it passed through his hands. However, the Koenigs heir believes that the picture was then acquired by Kramarsky in questionable circumstances. Christine Koenigs, Franz’s granddaughter who is based in Amsterdam, told The Art Newspaper that “I can confirm making a claim on the picture”, although she declined to give further details.

Outsiders find it difficult to make a judgement on the strength of a possible Koenigs claim. In the catalogue for the current Städel exhibition, Iris Schmeisser, the museum’s provenance researcher, comments on the aftermath of the sale of the Portrait of Dr Gachet and two other paintings to Koenigs in May 1938: “Shortly thereafter—the details of the transaction can no longer be reconstructed—they came into the possession of Siegfried Kramarsky”.

We should clarify that the Städel Museum is making no legal claim on the Van Gogh, as the painting left the museum according to German law at the time. Although the sale of “degenerate” art from German museums now seems morally reprehensible, this deaccessioning is accepted by the German government and the country’s museums as legal. But while a possible Koenigs claimshangs over the Portrait of Dr Gachet, it is likely to remain secreted away in Switzerland.

On Wednesday Van Gogh’s Drenthe painting Peasant burning Weeds sold at Sotheby’s, New York, for $3.14m, more than five times the low estimate ($600,000-$800,000). Yesterday it was announced that the picture has been jointly acquired by the Van Gogh Museum in Amsterdam and the Drents Museum in Assen.