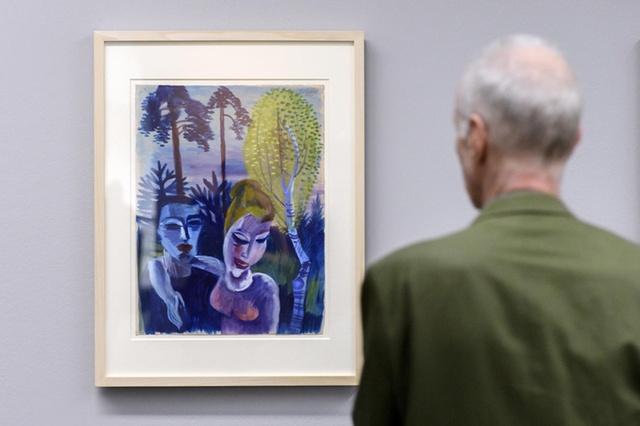 A visitor to the Bern Museum of Fine Arts looks at "Paar in Landschaft, 1921" by German painter Conrad Felixmueller, in April 2018. The painting was part of the exhibition "Gurlitt: Status Report Nazi Art Theft and Its Consequences".

Eight years after the confiscation of the spectacular art collection of Cornelius Gurlitt, the systematic research into the origin of the 1,500 or so works of art has largely been completed. The provenance of 1,000 works of art remains unclear.

“There is a very large grey area,” said art historian Gilbert Lupfer, director of the German Lost Art Foundation in Magdeburg, which since 2016 has been carrying out research into the art collection amassed by Cornelius Gurlitt (1932-2014).

The collection was unearthed by chance in 2012, 15 months after German custom officers carried out a routine search of passengers on a train from Switzerland and found 77-year-old Gurlitt with €9,000 (CHF9,550) in cash – just below the €10,000 reporting limit.

Cornelius Gurlitt's collection of artworks was discovered by chance in his Munich apartment in 2012. Pieces had been piled from floor to ceiling, ...

The German authorities, suspecting he was a tax dodger, entered his flat and were stunned to find it packed with masterpieces by artists such as Picasso, Renoir and Matisse whose value has been estimated at several hundred million francs.

The reclusive Gurlitt had inherited the collection from his father, Hildebrand Gurlitt (1895-1956), one of Hitler’s official art dealers – an “unscrupulous dealer” who just “wanted to do business”, according to Lupfer.

“Whatever research was possible, we have exhausted it,” Lupfer said, pointing to the years spent by international experts researching the Gurlitt collection.

Only 14 works by artists such as Max Liebermann, Henri Matisse, Thomas Couture or Adolph von Menzel have so far been clearly identified as looted art and returned to their rightful owners.

After Cornelius Gurlitt’s death on May 6, 2014, the Bern Museum of Fine Arts was appointed sole heir – to its great surprise – and took charge of the estate. In an agreement with Germany, it was stipulated that provenance research would be carried out in Germany.

Bern undertook to make a substantial contribution to this research. In 2017 the Bern Museum of Fine Arts became the first museum in Switzerland to open a department for provenance research.

September 22, 2010: German custom officers carry out a routine search of passengers on a train from Switzerland and find 77-year-old Cornelius Gurlitt with €9,000 (CHF10,800) in cash (just below the €10,000 reporting limit). Suspicions are raised of tax evasion.

February 28, 2012: The authorities enter Gurlitt’s flat in Munich and discover up to 1,400 works of art, many thought to have been lost in the war. The discovery is kept secret, while an expert gets to work on the art’s provenance.

November 3, 2013: German magazine Focus reports the story, which gets headlines around the world.

January 28, 2014: A task force reveals that following an initial examination, 458 works are suspected of being looted.

February 10, 2014: More than 60 valuable paintings, including works by Picasso, Renoir and Monet, are found in Gurlitt’s house in Salzburg. It later turns out the Austrian property contained 238 works in total.

May 6, 2014: Gurlitt dies aged 81 in his Munich flat, not having seen his paintings since they were confiscated two years previously.

May 7, 2014: Gurlitt’s will names the Bern Museum of Fine Arts sole heir of the collection.

November 2017: Bern Museum of Fine Arts displays some of the collection for the first time.