April
Ketterer Kunst 18 May 2020
Munich, May 18, 2020 (KK) - What they have in common are significant provenances and fascinating background stories. Additionally, the two works by Lovis Corinth and Max Liebermann are prime examples of proper handling of looted art. Now both works will be offered in the 500th Anniversary Auction at Ketterer Kunst in Munich on July 17 - 18, 2020.

Lovis Corinth's "Tiroler Bauernstube" has a provenance that includes two important Jewish collectors: the Berlin architect Leo Nachtlicht and the textile manufacturer Robert Graetz. The latter acquired the oil painting in 1932, a year before the Nazis seized power, from his friend Leo Nachtlicht who was in dire straits as a consequence of the global economic crisis. However, by 1941 the renowned Collection Rober Graetz had been scattered due to Nazi persecution, looting and a forced sale shortly before the collector's deportation. In cooperation with the joint research project "Rekonstruktion der Sammlung Robert Graetz und Forschung zum Verbleib der vermissten Werke" (Reconstruction of the Collection Robert Graetz and Research into the Fate of Missing Works) a fair and just agreement between the private owners and the heirs to the estate of Robert Graetz was found. The work will enter the bidding race with an estimate of € 40,000-60,000. 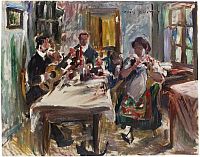 For provenance researchers Max Liebermann's drawing "Brink (Dorfanger) in Laren" is a real lucky chance. Works by the important Jewish artist, especially his famous drawings, were part of most renowned Jewish collections. However, as Liebermann did not title a lot of these works and due to the fact that he made variations of similar motifs, it is nearly impossible to clearly identify looted art without photographic documentation.

In this context the existence of an old picture shot at the Berlin apartment of the famous businessman Max Cassirer was ever more helpful. It shows Liebermann's chalk drawing in a prominent spot right next to the fireplace. In the Golden Twenties Cassirer was a highly recognized member of the capital's high society and it is very likely that a number of well known people stood in front of this work.

The Nazis, however, forced the Jewish collector to flee into exile and confiscated the complete valuable furnishings of his apartment. In 1942 the art dealer Hans W. Lange acquired the sheet from the hands of the Chief Finance President - a second photo shot at the Allied Central Collecting Point in Munich completes the provenance.

Now the chalk drawing is offered in consent with the heirs to the estate of Max Cassirer and in context of an amicable agreement for the benefit of all parties involved with an estimate price of € 8,000-10,000. Since Max Cassirer was an advocate of progressive education throughout his life, parts of the auction proceeds will go to a school project.

The family company Ketterer Kunst (www.kettererkunst.com and www.ketterer-internet-auctions.com) with headquarters in Munich and branches in Hamburg, Duesseldorf, Berlin as well as with a global network of representatives in , among others, the USA and Brazil, was founded in 1954. It is one of the leading European houses for auctions of Fine Art from the 19th to the 21st Century and Rare Books. According to the latest figures issued by artnet Price Database for 2019, Ketterer Kunst holds place 11 in the ranking for Art after 1900, for Art of the 20th Century it is the strongest-selling family business world-wide.