A digital walking tour through the Amsterdam Joden Houttuinen

[English translation - for original Dutch article, click on the link below]

In the Netherlands, more than 7,000 Jewish properties were stolen during the Second World War, of which more than 1,700 were in Amsterdam. Pointer went in search of the stories behind these transactions and made a digital walking tour through the Amsterdam Joden Houttuinen. 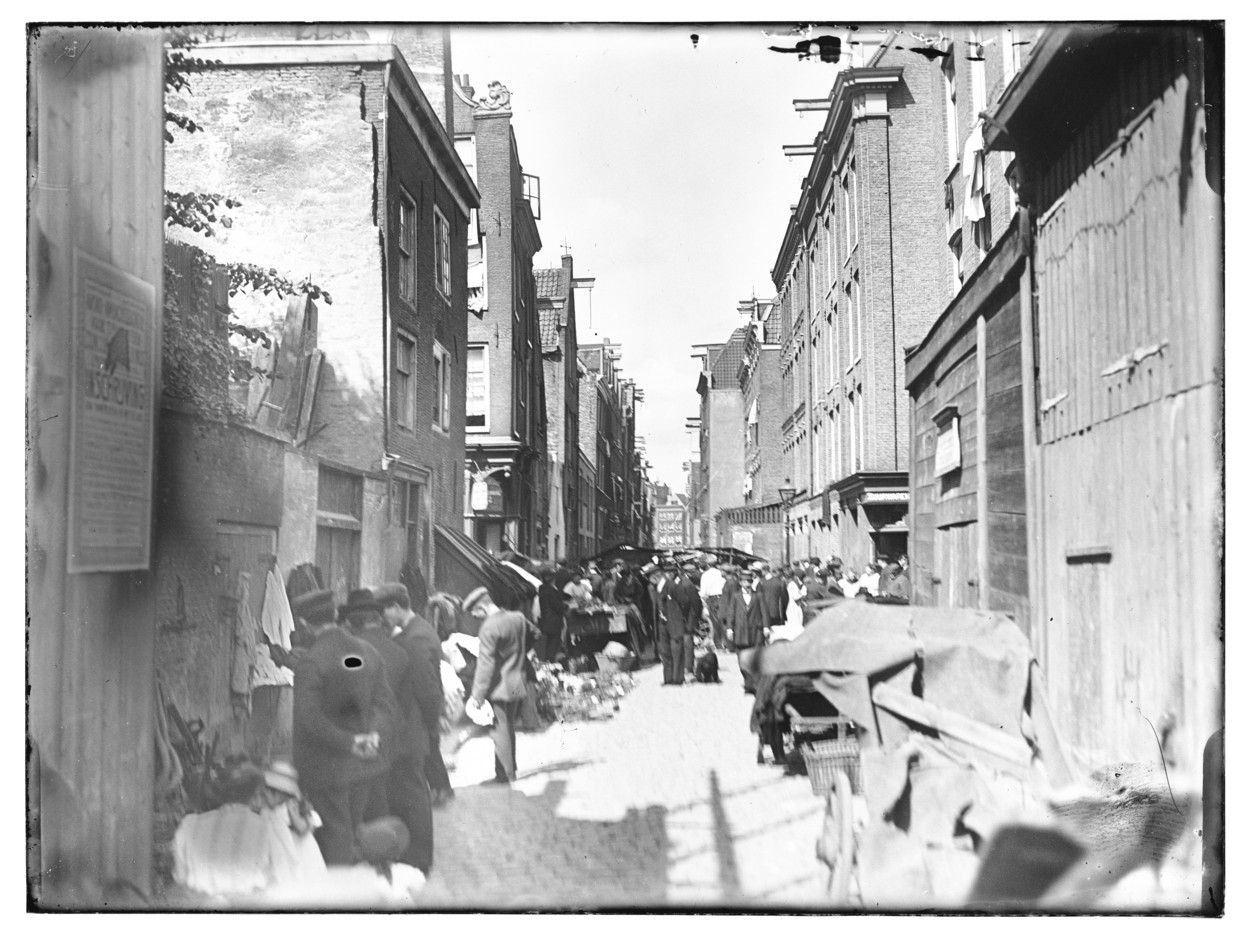 The Joden Houttuinen ran parallel to what is now the Jodenbreestraat. It was poor and the houses were dilapidated.

The stolen Jewish real estate in the so-called Verkaufbücher concerns cold figures and rows of names of Jewish owners and the buyers: shady entrepreneurs and real estate traders. Data journalists from the journalistic platform Pointer van de Kro-Ncrv have processed these data into poignant personal stories and highlighted various cities, including Amsterdam, The Hague, Den Helder and Breda.

Data journalist Thomas de Beus investigated the stories of the now no longer existing Joden Houttuinen. "This street represents well the pre-war Jewish atmosphere, with the famous Olympia boxing school and the only surviving Gosler House. There are many photos of it in the City Archives. Israel Querido has written about the street. Whole families who lived there were gassed. It is a short street where many expropriations took place. If you look at all the information, you cannot fail to be moved," says de Beus.

The Jewish property stolen during the war was registered by the German occupying forces in eighteen 'Verkaufbücher'. These books contain the addresses of the looted properties, the names of the expropriated Jewish homeowners and the buyers. They also contain the names of the notaries who made a great deal of money from these transactions and they contain the sale price.

The Amsterdam civil-law notary A.A.F. Rambonnet, for example, was involved in 265 transactions totalling more than five million guilders (now about 26 million euros). "The owners of the properties had been deported, the houses were empty and people were making a killing. Our task was to put this vast amount of looted property figures into a form that would allow people to look into the subject".

The National Archives digitized these handwritten books last year in collaboration with the Land Registry. The Verkaufsbücher contains eighteen books, only the first part is missing. The books contain a total of 7,109 transactions throughout the Netherlands, of which 1,780 were in Amsterdam. The transactions have a total value of almost one hundred million guilders (now some 581 million euros). Some of the money paid for the deportations to the Westerbork and Vught camps.

"The books only give an overview of the houses that were also sold after their expropriation. It is a very precise but also limited view of what happened then," says De Beus.

The Pointer platform has processed this data into a dot map. On the map, each dot can be clicked after which the address, the names of the owner and buyer, the date of sale and the sale price are listed.

During the occupation a lot of Jewish real estate was expropriated and resold. In Amsterdam alone there are more than 1,700 properties as far as we know. 1 dot stands for 1 property. In the black circles are the streets where most of the buildings were expropriated.

In the Joden Houttuinen, a disappeared street in the Amsterdam Jewish quarter that ran parallel to the Jodenbreestraat, nine buildings or clusters of buildings were expropriated.

Animated images by Pointer show what the street looked like around 1937. Number 1 is the Goslerhuisje, now café de Sluyswacht, where the A. Gosler family had an iron and metal business. It is the only remaining building in the street. At number 80 was the acid inlay of Barend Zwaaf and at number 33-37 was the Olympia boxing school, where the famous boxer Ben Bril trained. At number 66 III high lived Isaac Asser, the father of Eli Asser. He was arrested at home and murdered in 1943 in Auschwitz, as was his wife Johanna and daughter Rebecca. Eli himself survived in hiding.

On the basis of a digital walk, Pointer takes the visitor into the Joden Houttuinen where poverty-stricken Jews lived amidst acid inlays, trade in rags. a kosher dairy, a synagogue, and a steam printer. On the basis of photographs from the City Archives, newspaper reports and articles including from Het Parool and quotes from the writer Israel Querido who wrote a book about this neighborhood in 1931, a picture is sketched of the Joden Houttuinen.

Earlier in 1901, in the report Krotten en Sloppen, municipal official Louis Hermans wrote that 78 of the 138 houses in the Joden Houttuinen stank and the population density was more than seven times higher than elsewhere. There were also many infectious diseases, such as measles, scarlet fever, diphtheria, and typhoid fever.

One of the nine expropriated properties was number 69, where Joseph Breemer ran his fuel business. The building in which the coal company was located was owned by his brother David Breemer. He was murdered in Auschwitz in 1943. At the end of 1943, the building was sold by the notary Van Riel to the municipality of Amsterdam for 9,000 guilders.

The Olympia boxing school at number 33-37 and adjacent buildings belonged to the Jewish owner W.V. Laar from Utrecht. At the end of 1940 many mainly Jewish boys formed a fighting squad to defend themselves against the WA, the Weerbaarheidsafdeling of the NSB. In the street was the famous printing house Joachimsthal at number 92-102. This building was also expropriated and sold. The family that ran the printing house was largely murdered in the camps.

[To see the animated maps, click on the link below to the original article in Dutch]

Little is left of the Joden Houttuinen. The dilapidated buildings in the street were demolished in the 1960s. The Maupoleum was built on the site and was later demolished in 1994 to make way for the Amsterdam School of the Arts.

Exactly how many buildings were involved?