The Museum Director Who Defied the Nazis 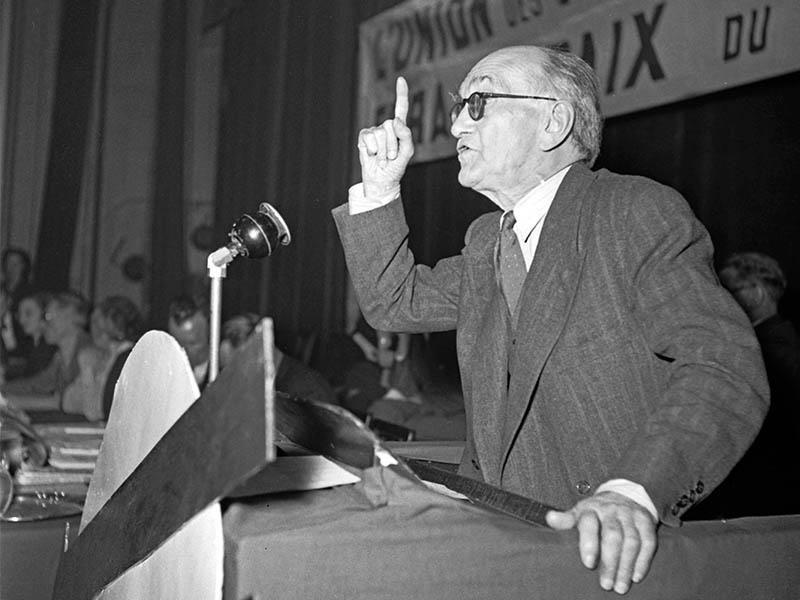 Paul Rivet addresses a congress of the French Socialist Party on July 2, 1948.

When Nazi tanks rolled into Paris in the early morning of June 14, 1940, most Parisians had already left the city in a mass exodus to the south. All the museums were closed except the Musée de l’Homme, or Museum of Mankind, which tacked a freshly placed French translation of Rudyard Kipling’s poem “If” to its doors: If you can keep your head when all about you are losing theirs...you’ll be a Man, my son! It was a defiant gesture, a dangerous message and even a sly call to arms: Unbenown to the invading army, the man behind the sign, the museum’s director, would become a moving force in the nation’s secret counteroffensive network.

With his bald pate, round eyeglasses and winged collar, Paul Rivet, an anthropologist then in his 60s, may seem an unlikely hero. Yet a recent wave of scholarship has revealed the true extent of his bravery and ingenuity in helping undermine not only the Nazis but also their French collaborators. This work, significantly, grew out of his long academic career, in which he boldly criticized racist ideas promoted by many anthropologists (and adopted by the Nazis). But by the summer of 1940, his fight was no longer an intellectual exercise. Rivet and his band of museum protégés—young scholars who didn’t hesitate to take up arms and risk their lives—went on to organize one of the earliest groups in the French underground­. It was this group, in fact, that helped to give the movement a name: the Resistance.

The story of the Musée de l’Homme group would end tragically, in betrayal, but historians agree that it showed the French people, many of whom were at first resigned to the occupation, that it was possible to oppose the Nazis—in spirit but also in action, by stealing their military plans, helping their prisoners escape and generally frustrating them. The Musée de l’Homme group “fed and watered the Resistance to come,” Julien Blanc, a historian, wrote in the first detailed study of that group, published in French in 2010.

A physician by training, Rivet became interested in anthropology in 1901, when he joined a five-year scientific expedition to Ecuador to measure the curvature of the Earth. While acting as the group’s official doctor, Rivet became intrigued by the linguistic and cultural diversity of the Amerindian peoples he encountered and began to study them.

Anthropology at that time divided humanity into “races,” largely on the basis of measuring skeletons—particularly skulls. Like most of his peers, Rivet accepted that races existed and that they were biologically distinguishable from each other, but he strongly rejected the concept of a racial hierarchy, in which some races were regarded as superior to others. He believed that people of different races were also products of long adaptations to their unique physical, social and cultural environments. After he returned to Paris from Ecuador, Rivet and like-minded colleagues reoriented French anthropology along those lines, to consider races as different but equal.

During the First World War, Rivet served as a medical officer at the First Battle of the Marne in 1914 and later in Serbia, and received medals for bravery, including the Croix de Guerre, for his unit’s role in setting up medical services behind the front lines. A decade later, he took over the old Museum of Ethnography on the Chaillot Hill, with its panoramic view of the Seine and the Eiffel Tower on the opposite bank, and set about modernizing it. As German anthropology embraced a notion of an Aryan super race, and anti-Semitic elements in French academic circles followed suit, Rivet co-founded an antiracist journal, Races et Racisme, in 1937.

The building that housed the old Museum of Ethnography was razed, a new building went up on the same site, and Rivet moved his renamed and modernized Musée de l’Homme into it. Here, a visitor still encountered the skulls and skeletons of different races for comparison, but now she also strolled through galleries organized by region, in which each region’s indigenous population was presented with its tools, art and symbols. Overall, the emphasis was on the similarities between peoples, rather than the differences.

As Hitler’s menace loomed over Europe, Rivet inaugurated the new Musée de l’Homme before an audience of France’s artistic, intellectual and political elite. By way of explaining the museum’s name, Rivet would later say: “Humanity is one indivisible whole throughout space and time.”

His message was as political as it was scientific. Unlike many of his contemporaries—indeed, unlike many scientists today—Rivet had always considered politics and science to be inseparable, having seen how “scientific” notions of supremacy could lead to violent injustice. He had been an outspoken critic of the anti-Semitism that led to the conviction of French artillery officer Alfred Dreyfus for treason in 1894, and was a prominent member of France’s antifascist movement in the 1930s. Visiting Berlin in 1933, he was shocked to find how deeply Nazi ideology had penetrated German society. In a letter to a close colleague, the German-American anthropologist Franz Boas, who had performed curatorial work for the Smithsonian Institution, he wrote that “a real regime of terror is reigning in Germany and this regime seems to cause no reaction at all” among many Germans.

Rivet started recruiting exiled German Jews and Eastern Europeans to give them a haven in which to work. According to his biographer, Christine Laurière, he also wanted to increase the representation of Eastern European cultures at the museum, viewing them as a bulwark against fascism. Among his recruits were 26-year-old Boris Vildé, a Russian-born linguist and ethnologist who specialized in the Finno-Ugric peoples of northeastern Europe, and 30-year-old Anatole Lewitsky, a tall, aristocratic-born Russian who had studied shamanism in Siberia, and whom Rivet discovered driving a Parisian taxi. They haunted the museum’s basement, which housed the scientific research departments, addressing Rivet as cher Docteur.

When war broke out, Vildé and Lewitsky—by now naturalized French citizens—were called up for military service. Injured and captured by the Germans, Vildé was interned in a prison camp in the Jura Mountains, between France and Switzerland, from which he managed to escape. Rivet later recalled his reappearance at the museum, on July 5, 1940: “We were sharing a frugal meal, right here, when our friend appeared, leaning on a cane, thin, exhausted. Without a word he sat down among us; he had returned to the bosom of his spiritual family.” Lewitsky also returned that summer, having escaped German captivity.

Vildé, Lewitsky and Yvonne Oddon, the museum librarian and Lewitsky’s lover, now launched a campaign of organized disobedience against the invaders—and against the collaborationist French government. With Vildé leading the cell, they recruited friends and colleagues across Paris, and within a few months “the little group had transformed itself into a veritable spider’s web covering the whole of France,” writes Tatiana Benfoughal, Vildé’s biographer. Rivet, too well-known to take an active role, facilitated everything they did: He put them in touch with Parisian intellectuals who he believed would be sympathetic to their cause, he translated speeches by Churchill and Roosevelt for them, and above all he provided them with a base and logistical support in the form of the museum, which he vowed at the outbreak of war to keep open. Vildé, under cover of his work for the museum, traveled through the occupied and free zones of France, recruiting dissidents, gathering military intelligence and organizing escape routes for Allied prisoners of war held in Nazi-run camps—by boat from the fishing ports of Brittany, for example. At one point he claimed he could draw on a 12,000-strong force and an impressive stockpile of arms. It was undoubtedly an exaggeration, but he understood the power of words as well as Joseph Goebbels, Hitler’s propaganda minister.

With Rivet’s blessing, the group used a mimeograph machine in the basement to produce a clandestine newspaper, Résistance. Oddon proposed the name, recalling that in the 18th century, Huguenot women imprisoned for their Protestantism carved RESISTER into the stones of their prison. An editorial from the first issue, dated December 15, 1940, proclaimed: “Resistance! That’s the cry that goes up from your hearts, in your distress at the disaster that has befallen our nation.” Copies were distributed around the city. It was dangerous work—if caught by the Gestapo, the résistants risked being tortured and executed—so they inhabited a secretive, nocturnal world of code names and passwords.

When one of them wanted to speak to Oddon about resistance matters, they would appear in the library and announce: “I have come for my English lesson.” Rivet carried on the fight in public, giving hugely popular, standing-room-only lectures on the folly of scientific racism. In July 1940 he wrote the first of three open letters to France’s collaborationist leader, Marshal Philippe Pétain, in which he warned, “Marshal, the country is not with you.”

In November 1940, he learned from the radio that the Vichy government had stripped him of his museum post; three months later, tipped off that the Gestapo was coming for him, he fled to Colombia. Just hours later, the Gestapo searched the museum in vain for plans of the German U-boat base at Saint-Nazaire on the Brittany coast—plans that Vildé’s people had stolen. The plans reached the British, and their forces bombed the base in 1942. In Bogotá, Rivet headed up the local committee of Gen. Charles de Gaulle’s government in exile, providing intelligence, contacts and logistical support to comrades in the Resistance back home.

The Gestapo arrested Vildé on March 26, 1941, after he was betrayed by two other Russian émigrés working at the museum, whom Rivet had recruited, and by a French double agent. Either the Gestapo or the Abwehr—a German intelligence organization—rounded up his fellow résistants around the same time. After they’d spent almost a year in prison, a German military tribunal found them guilty. Despite petitions from influential French figures including the poet Paul Valéry and the exiled Rivet, a firing squad executed Vildé, Lewitsky and five others at Fort Mont-Valérien, a fortress outside Paris, in February 1942. The tribunal commuted Oddon’s sentence, and she spent time in various prisons before being deported to the Ravensbrück concentration camp in Germany in late 1944.

Laurière, Rivet’s biographer, has unearthed just one letter that Rivet wrote to a friend at the time. It acknowledged the fate of Vildé and Lewitsky: “Those two corpses haunt me like an obsession.”

Another young ethnologist, Germaine Tillion, took over Vildé’s role as the head of the museum’s resistance cell. She too was betrayed and deported to Ravensbrück. Both Tillion and Oddon survived the camp, and Tillion would publish a groundbreaking ethnographic study based on her captivity, Ravensbrück.

Rivet returned from exile in October 1944 following the liberation of Paris; de Gaulle awarded him the Resistance medal in recognition of “the remarkable acts of faith and of courage that, in France, in the empire and abroad, have contributed to the resistance of the French people against the enemy and against its accomplices.” Oddon, Tillion, Vildé and Lewitsky were awarded the same medal—the last two posthumously. Rivet resumed his old post at the museum.

Today, the lobby at the Musée de l’Homme hosts a small permanent exhibition dedicated to Rivet, Vildé, Tillion and their band. If you climb the stairs and turn right, you look out through a large window onto the Eiffel Tower, from which a swastika once flew. Turn left, and you arrive at the research library named for Yvonne Oddon, where the résistants came for their English lessons.