The Nazis took a precious kettle from a Jewish couple. Some 86 years later, their grandson in Maryland got it back. 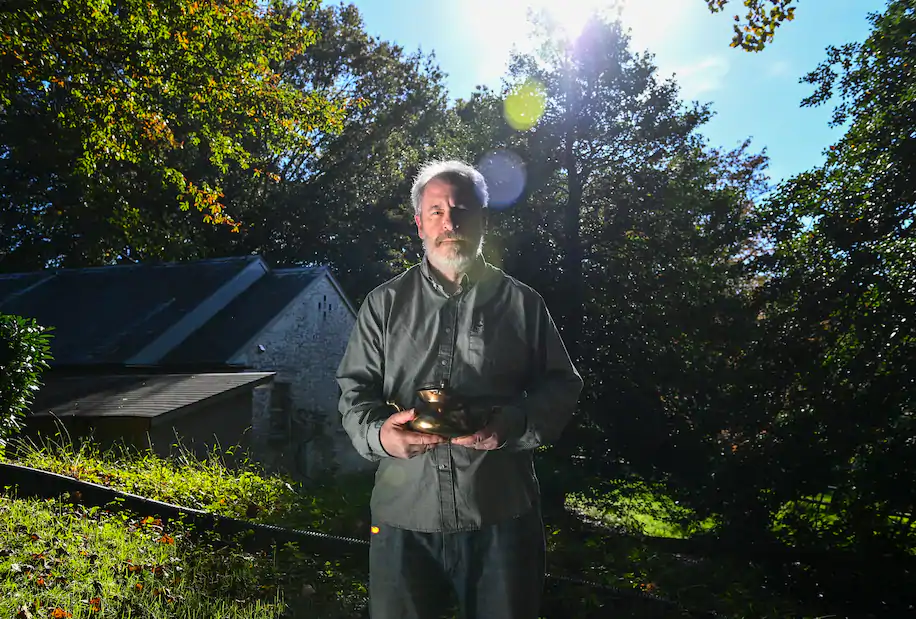 Martin Goldsmith with the 16th-century kettle at his Kensington, Md., home. The kettle, sent to him from a German museum, belonged to his grandparents before they died at the hands of the Nazis in World War II

On a recent afternoon, a seemingly unremarkable brown parcel appeared on the front porch of Martin Goldsmith’s home in Kensington, Md.

Goldsmith, 68, swiftly pried open the package. With careful hands, he uncovered a 16th-century kettle that belonged to Goldsmith’s grandparents before they died in the Holocaust.

He examined the double spouted cauldron — composed of brass, bronze and iron — with awe. It had quite a path before it landed on his doorstep.

Goldsmith is well-versed in his family’s tragic history, having written two books on the subject. But unlike the anecdotes he has strung together over the years, the kettle represents something different to him: a rare, tactile treasure linking him to his paternal grandparents — whom he never met.

Holding the kettle for the first time, Goldsmith was moved to tears.

In early April, Goldsmith was unexpectedly contacted by an art historian from a museum in Oldenburg — the city in northwest Germany where his grandparents once lived and where his father was born.

The message came from Marcus Kenzler — a researcher and cultural scientist who traces the origins of Nazi-looted property at the State Museum for Art and Cultural History, with the aim of returning the objects to the descendants of the original owners.

“Like every human being, every object has its own individual biography,” said Kenzler, 48. He studies decades-old records to determine an object’s exact origins, searching for traces left by previous owners in an effort to reconstruct the precise path a relic once took.

According to the museum’s inventory book, the kettle in question was sold by the Goldschmidt family in November 1934. Notably, “Intensive research has shown that the sale of the kettle did not take place voluntarily, but had a Nazi-persecution-related background,” Kenzler added.

The Nazi involvement in the acquisition was made clear by the glaringly low sales price of the kettle: 20 Reichsmark, or approximately $11. In 1942, another museum acquired a similar object for 300 Reichsmark. Today, the kettle is valued at roughly $2,500.

This wasn’t an uncommon occurrence. More than 20 percent of art in Europe, collectively worth billions of dollars, was looted or coerced into a sale by the Nazis. It’s estimated that 100,000 pieces of the more than 600,000 stolen artifacts are still missing. The burden of restitution typically rests on descendants, who must prove their relation to the original owner.

In an email to Goldsmith, Kenzler outlined his findings.

“Fortunately, the history of your family can be reconstructed very well through your books, and I was able to find numerous other sources,” he wrote.

Kenzler suggested that once his research was complete, the kettle — or Lavabokessel, the German term for the pouring vessel — should belong to Goldsmith, the last living relative of Alex and Toni Goldschmidt. Goldsmith has no children, and his parents, as well as his only brother, have all died.

“I was very excited when I contacted Martin for the first time,” said Kenzler, adding that since beginning his research in 2011, he has returned only three other artifacts to the families of the original owners — two antique pieces of tin-glazed pottery and a large Renaissance cabinet. “It happens far too rarely that the provenance of a work of art or an object can be completely deciphered.”

“I still have a lot of cases to solve,” he continued. “This work is important, and we have the historical obligation to come to terms with the injustices and horrors of the past.”

In response to Kenzler’s email, Goldsmith wrote, “Though born decades after the Nazi era, you have not shirked from the responsibility of facing up to the horrors of those years but rather have done what you can to try to balance the scales of justice, impossible though that task may ultimately be.”

The kettle finally arrived in Maryland on Oct. 11, nearly 86 years after it had left the family’s hands.

Everything changed in November 1932, when Nazi officials informed the Goldschmidts that they had no choice but to sell their home — since a Jew was no longer permitted to own such a fine dwelling. It was sold for a mere fraction of its true value.

“The house is worth easily $6 million today, and it was sold for just over $10,000,” Goldsmith said. “They were forced to move into smaller and smaller quarters.”

In the years that followed, more laws and restrictions against Jews were enacted, leading up to the November Pogrom in 1938 — also known as Kristallnacht, or the Night of Broken Glass — in which thousands of Jewish-owned shops and synagogues were destroyed throughout Nazi Germany, and 30,000 Jewish men were arrested, including Goldsmith’s grandfather, Alex Goldschmidt.

The following year, Alex Goldschmidt and his son Helmut fled Germany on the S.S. St. Louis, a ship filled mostly with Jewish refugees that sailed to Cuba, but was turned away. After unsuccessfully appealing to the United States and Canada, the ship and its passengers returned to Europe.

In August 1942, Alex Goldschmidt and Helmut were murdered in Auschwitz concentration camp. Two months later, his wife, Toni, and their daughter Eva were killed in a forest outside Riga, Latvia.

One Goldschmidt daughter survived, escaping to Leeds, England. A son, Gunther Ludwig Goldschmidt, managed to flee to America when he was 27 — just in time to be spared. Once in the United States, he changed his name to George Gunther Goldsmith, and had two sons, one of them being Martin Goldsmith.

While in Germany, George Goldsmith was able to survive by being part of an all-Jewish performing arts ensemble called Jüdischer Kulturbund, composed of musicians, artists and actors who had been barred from German institutions. The Nazis permitted the group, which his wife (Martin Goldsmith’s mother) also belonged to, as part of a Nazi propaganda effort to shield the oppression of Jews from the outside world.

The group was eventually forced to shutter in 1941, though Goldsmith’s parents managed to make it to New York City immediately before.

They raised their two sons in St. Louis and spoke very little of their Jewish identity or past traumas, Goldsmith recalled.

“In my father’s mind, to be a Jew was to be an outcast, to be hated, to be murdered,” said Goldsmith. “So, I did not grow up with a sense of being a Jew.”

It wasn’t until his 50s that Goldsmith, who has worked as a radio host and classical music programmer for 45 years in the D.C. area, developed a yearning to understand his Jewish identity and family history.

“I had a desire to somehow be connected to my family, to the people who, by all rights, I should have known,” Goldsmith said, adding that he studied and had his bar mitzvah at age 55.

He went on to write two books about the Goldschmidt family history, one of which — “The Inextinguishable Symphony: A True Story of Music and Love in Nazi Germany” — has become the basis for an upcoming documentary film he co-wrote called “Winter Journey,” airing this December. The book and film chronicles the story of Goldsmith’s parents and their experience playing in an all-Jewish orchestra in Nazi Germany.

In researching his books, Goldsmith visited Oldenburg several times, and even toured the stately house that his family once occupied, now inhabited by a German architect and his family.

“I experienced nearly every emotion in the catalogue,” Goldsmith said. “It was terribly exciting to be inside this house where my family had lived, and it was devastating to think of what had happened to them.”

Although the brief visit to the home brought Goldsmith closer to his relatives in some way, it was fleeting, he said.

“The house is no longer in the family. The paintings and various other art objects in the house are all gone. Traces of my family are gone. Except for this little kettle,” he said, from the dining room of his Maryland home, where the kettle now sits on a shelf in a place of honor.

Goldsmith looked over at the small vestige of his legacy — a tangible piece of his history, that is finally his to hold.

“It’s an object that 85 years ago lived in my grandparents’ house. These people whom I never had a chance to meet passed by it and touched it and used it,” said Goldsmith, adding that this type of kettle was historically — and ironically, given the pandemic — used for the ceremonial washing of hands, though he is not sure how his grandparents used it, or if it was simply on display in their home.

Since the kettle arrived, every evening before bed, Goldsmith finds himself doing the same thing: “I walk past it, and I touch it,” he said. “It’s a way of telling my family good night.”