Germany is revising the Holocaust in order to keep stolen art.

Last week, I joined my Jewish constituents in marking the 82nd anniversary of Kristallnacht. The Night of Broken Glass falls the same week as Veterans Day, and each year, fewer Holocaust Survivors and fewer of the American soldiers, sailors, airmen and Marines who liberated Europe are able to join us for commemorations. As this generation passes away, their children and grandchildren must never forget the heroism and hope that conquered Nazi fascism and tyranny. 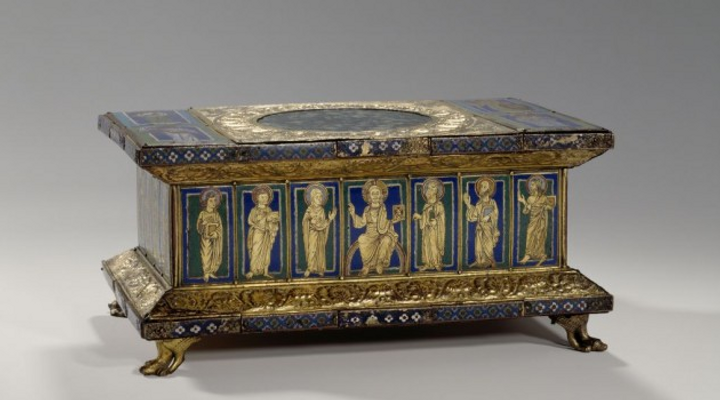 The legislatures in my state, Indiana, recently made Holocaust education part of the curriculum. Students will learn the lessons from World War II and that “Never Again” is more than just a phrase.

I have served America abroad. Prior to Congress and through my work on the Armed Services Committee, I have a clear understanding of the lessons of World War II. We value the alliance between Washington and Berlin. Through bipartisan American leadership, Germany has grown to be an important NATO ally and major trading partner.

Because of this history and today’s geopolitical realities, I was astounded to review the brief Germany filed in an upcoming Supreme Court case, The Federal Republic of Germany v. Alan Philipp, et al.

Today, on display in a museum in Berlin sits a collection known as the Welfenschatz. It was extorted from Frankfurt Jews in June 1935. This scheme was personally directed by Herman Goering, the second most powerful Nazi government official at the time. To add insult to injury, the collection then became a surprise birthday gift for Adolph Hitler. These are facts.

The history of the persecution of Jews in Germany prior to and after June 1935 is well documented. The Nazi government made everyday life for Jews in Germany increasingly impossible starting in 1933. Indeed, multiple acts of Congress, academic scholars, the U.S. Holocaust Memorial Museum and Germany have documented the timeline of the Holocaust. I believe this to be established and sacred.

Ironically, on the anniversary of the attacks on Pearl Harbor, Justices will hear oral arguments. This comes after multiple lower courts sided against Germany and with the Jewish heirs. While I am not taking a position on the case, I feel obligated to forcefully speak up because — as the saying often goes in politics — facts are stubborn things.

Last month, I put partisan differences aside and joined a diverse, bipartisan group of colleagues to raise awareness about this landmark Supreme Court case. Since the outcome could very well alter the landscape of Holocaust restitution, I recruited Democrats and Republicans from across the United States to sign an open letter to German Ambassador Emily Haber. We requested clarity on the German legal position.

The German legal argument completely neglects the established fact that in 1935, Jews in Frankfurt had no avenue for redress. Put differently, they could not call a Congressmen or write a letter to the editor or stage a peaceful protest.

In recent years, Congress has devoted bipartisan attention to issues around Holocaust property restitution. In 2016, Congress amended the provision of property recovery in the Foreign Sovereign Immunities Act. This also specifically raised the availability of claims for Nazi looted art.

Additionally, in 2016, the Holocaust Expropriated Art Recovery Act ensured that Holocaust-era art claims are decided on the merits.

In 2017, Congress passed the Justice for Uncompensated Survivors Today Act. In July, the United States State Department released a report as required by the JUST Act which said the following:

“The Holocaust was also one of the largest organized thefts in human history. The Nazi regime’s confiscation, seizure, and wrongful transfer of the Jewish people’s property were designed not only to enrich the Nazi regime at the expense of European Jewry but also to permanently eliminate all aspects of Jewish cultural life.”

My colleagues and I raised these specific concerns with the Ambassador. Her response reminded us of conversations we have had with our young children. When they want to wiggle away from tough questions, they respond with distractions and avoid specifics.

I applaud Germany for standing by its moral, political and historical responsibility for the Holocaust. However, I’m baffled that German taxpayers are funding attorneys who are opportunistically rewriting the history of the Holocaust and don’t understand why the German Ambassador cannot give bipartisan Members of Congress honest answers.

If this is how Members of Congress are treated, I’m increasingly concerned how elderly Holocaust Survivors and their heirs are treated. As I reflect on Kristallnacht and the sacrifices of our WWII veterans, I remain optimistic that Germany will clarify its position on the timeline of the Holocaust.

Rep. Jim Banks is a Republican congressman in Indiana.